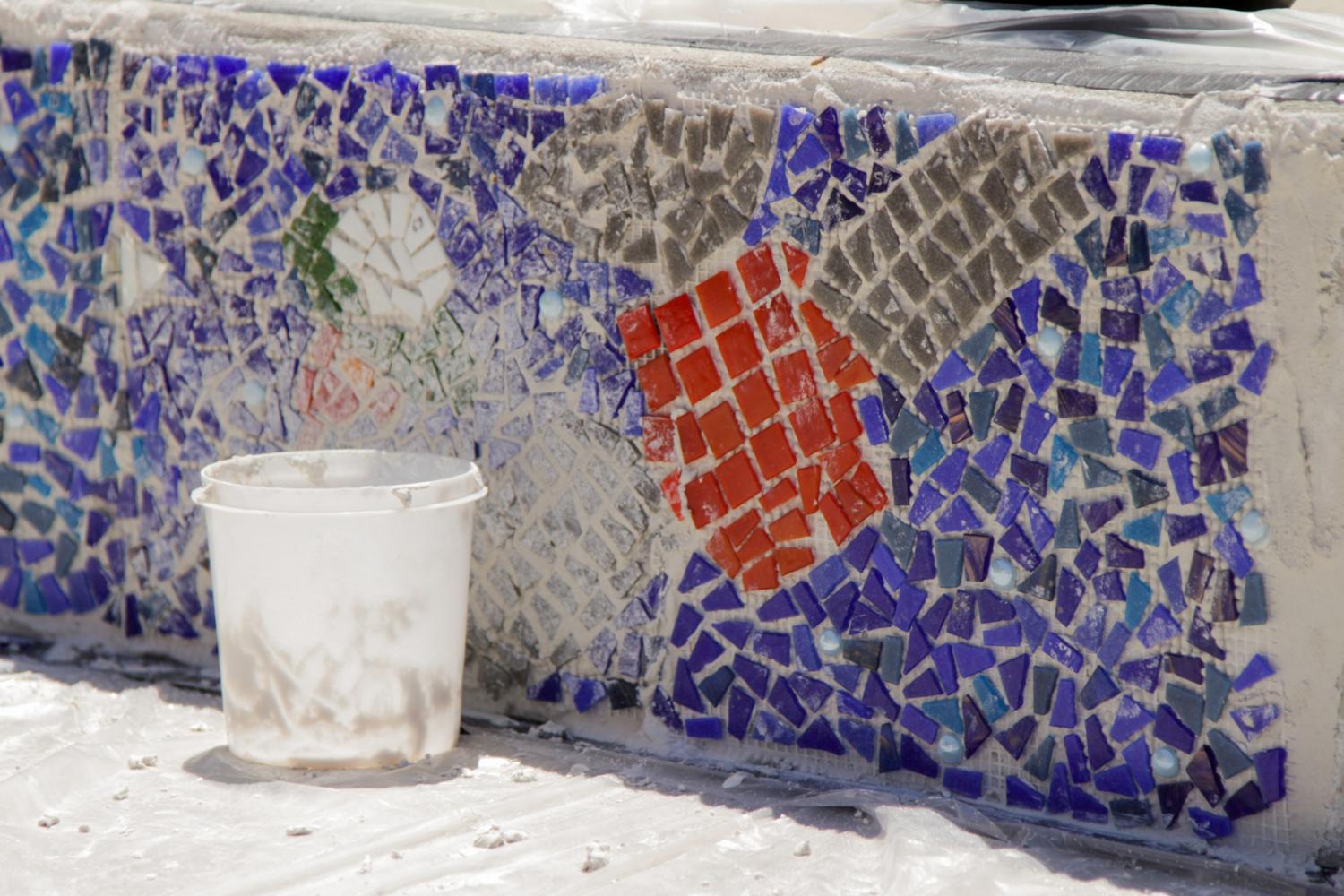 A section of the mosaic during installation.

A display of mosaics now add color to the amphitheater in Jefferson’s courtyard. Though one riser currently has artwork, the people behind its ongoing project plan to continue working throughout the next school year.

The idea for the project was first proposed in 2015, when artist specializing in mosaics Anita Damron contacted FCPS and soon-to-be former principal Dr. Evan Glazer about creating a mosaic at Jefferson. Glazer was also interested in initiating beautifying projects.

The mosaic’s design and construction commenced in the following years. Working on it is the art club and Damron, who provides guidance and installs completed pieces.

“The project officially started sometime the end of last year, which was when we began creating designs for the different parts of the mosaic,” recent graduate and 2016-2017 art club president Sydney Zheng said. “The actual creation of the mosaic itself began this year.”

The mosaic’s design involves nature. The amphitheater riser consists of three tiers divided into two sections. Each will focus on the underwater environment, the earth and the sky, of which one side was recently installed.

”Many students, for example, are inspired by the sky and the stars and the mystery of the oceans,” Zheng said. “We wanted to capture that fascination by showing the beauty of different sciences [and] parts of the world.”

The art club met about once a month during eighth period blocks to work on the mosaic, with more frequent meetings closer to the end of the year and hosting two blocks open to all students. During this time, students learned how to design, cut and place tiles.

“The andamento [flow of tile placement] [the students] selected was opus palladianum, also referred to as crazy paving,” Damron said. “It is a method of cutting and laying the tesserae [tiles] in a random fashion, which gives a more modern feel and creates movement while at the same time anchoring the objects in the design.”

The amphitheater mosaic project has encountered challenges, including solidifying the design idea and finding space to work and store materials, according to Damron. The limited number of eighth period meetings also restricted the amount of time that the club had to work on the mosaic. Creating and installing the first riser was a goal that Damron and the art club had for the 2016-17 school year. The club will work on the remaining riser throughout the upcoming year.

“We finished the first of six risers by June 13, our deadline,” Damron said. “I put the TJ project first on my list for several weeks to make sure we made the first installation deadline.”

Being one of the final projects occurring during his administration, Glazer looks forward to artwork being created for the newly-renovated building.

“I feel excited again to see new artwork in the school,” Glazer said. “I want our students to have a sense of ownership in their school, and creating their own art on the building provides that personal touch.”