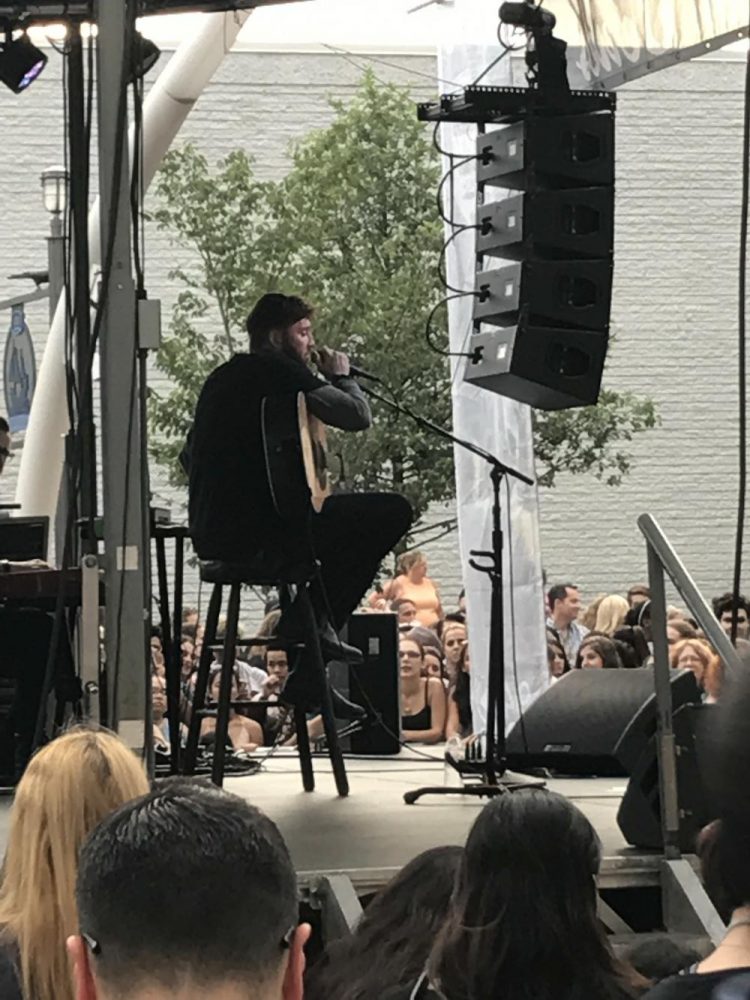 The free concert began around 6:30 p.m. with opener Shelby Blondell performing a variety of her own songs. Blondell dedicated the last one to her grandmother, who passed away on Wednesday.

Prompted by the cheering of the crowd, James Arthur took the stage next to perform original hits, including “Say You Won’t Let Go,” as well as several covers. Throughout the concert, Arthur sat on the edge of a stool at center stage and occasionally played his guitar in addition to singing. The simplicity of the setup allowed fans to purely focus their attention onto his music.

Arthur exhibits raw transparency through his music, as his songs touch on personal feelings and experiences. His live rendition was vocally exact and he sprinkled on some improvised sections to add a fresh touch to the melodies.

“I really liked the concert. Even though I don’t know too many of James Arthur’s songs, it was fun to hang out and listen to the music,” Sun said. “My favorite part was when he played ‘Impossible,’ which was one of his first hits because it was a throwback and I really like the song.”

Besides “Impossible” by Shontelle which prompted Arthur to win the X Factor UK 2012, he also performed covers of George Michael’s “Careless Whisper” and Ariana Grande’s “Into You.”

Both Sun and Wang figured that the event would fun to attend since they enjoyed James Arthur’s music and the concert was free. Sun learned about it via advertisements at the Tysons mall. She then relayed the information to Wang.

“I found out at first through Tiffany and I wanted to go because I really liked that one James Arthur song that’s been on the radio [‘Say You Won’t Let Go’],” Wang said. “I first heard that song, before I ever heard it on the radio, after Tiffany added it to a shared playlist on Spotify that we have.”

Halfway through his performance, Arthur also joked with the audience. He first asked them whether they were feeling good to which they responded in the affirmative, and then stated that this feeling was unfortunate because the next song up was a depressing one.

After informing the crowd that he was going to cover Ariana Grande’s “Into You,” Arthur coyly mentioned that he hoped someone would post a video of the cover and that it would someday “slide into her DMs.” He further connected with the crowd by waving back to the audience when prompted.

James Arthur performing “Can I Be Him”: