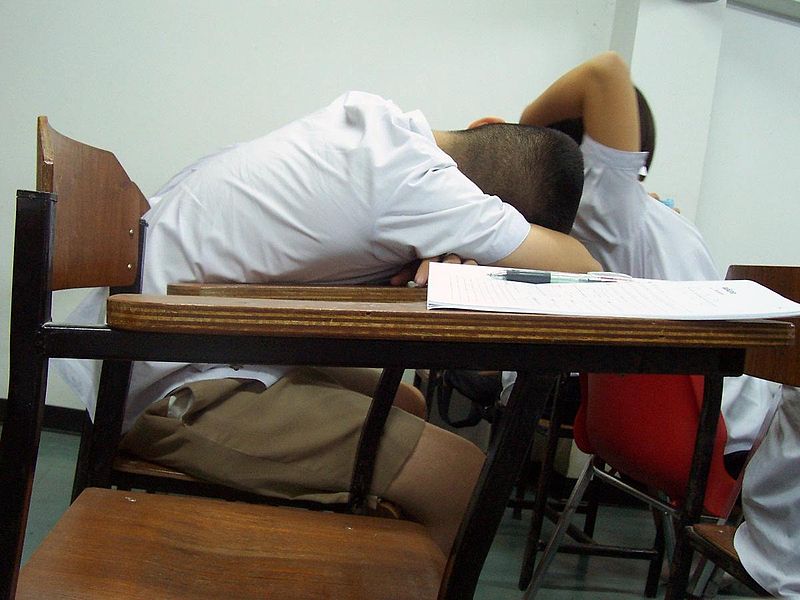 Photo by Love Krittaya from the Creative Commons

By pushing back the current schedule by two hours, Jefferson students may be better rested, and thus not fall asleep during their exams, like this student is.

In order to take their final exams, Jefferson students had half-days of school from June 19 to June 22.

Currently, school during final exam week runs from 8:40AM to 1:00PM. Basically, we are running on a 3-hour early release schedule, which is similar to the schedule on PSAT day. While students have to get up early in the morning, they also get to go home much earlier, and aren’t the last people to get on the bus from school to home. Thus, students can relax more when they get home, or have additional time to study.

However, I feel that students would benefit from having the schedule pushed back by 2 hours, so that school runs from 10:40AM to 3PM. This would allow students to sleep for longer in the morning, and thus not be sleep deprived and tired when they take their first exams of the day. This also would allow for extra studying time for those “early bird” students. Under this schedule plan, students will also get home an hour earlier, which is also a nice benefit. While this is two hours less than our current schedule, this is more than made up for due to the 2 hour delay in the morning.

Sleep deprivation at Jefferson is always a problem, as students have lots of work to do and little time to do it. During finals week, this is no exception, especially for students with multiple finals on one day. Studies have also found that better-rested students more do better on tests. By using my modified schedule, students will be able to get up at 8AM rather than in the early hours of the morning, and thus get an additional 2 hours of sleep. Since students will also have an extra hour after school to start studying, and students are likely to use their extra time getting food or relaxing rather than actually studying, I am assuming that students would probably go to bed at normal times rather than late at night.

Students usually want to get good grades on their finals so they can pass their classes, and maybe even boost their grades. By having a two hour delay on final exam days, students can do better on these tests and thus get good grades.