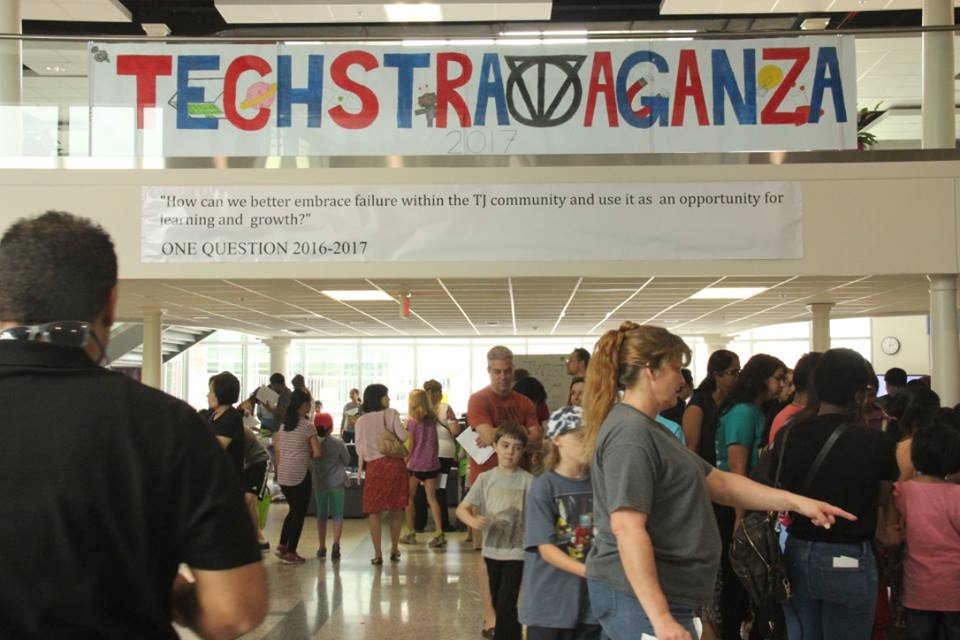 The Nobel Commons was filled with children who wanted to learn about biology, technology, computer science, and other scientific subjects, and their parents, who want their kids to pursue a career in science or technology.

Tomorrow’s Women in Science and Technology (TWIST) and Women in Science and Engineering (WISE) hosted their annual Techstravaganza science fair for elementary and middle school students at Jefferson on May 20th. The fair contained a wide spectrum of activities for young students, the most popular being those that involved ice cream, oobleck, binary bracelets, and skittle gradient labs.

“This year, we got nearly 3000 visitors, which is a big jump from last year, where we got 300.” senior and president Jenny Zhang said.

This year was the first year that the entire school building was open for the event. Since the attendance was raised this year, more exhibits could be displayed.

“We had around 13 exhibitors this year, compared to four last year,” Zhang said. “I feel like this year, we got a lot of buzz since a lot of people came and we started using our social media sites, like our Facebook page and Twitter. Next year, we can definitely expect more people, and we could use more sponsors”

Of the many groups who attended, one group of middle schoolers, Robots for Youth, greatly impressed the staff with their young age and neat robots.

“They had a bunch of demonstrations that filled up the entire Da Vinci Commons,”  Zhang said. “They had a little robot pen on the ground, and they let kids play with the robots. We don’t have that many robotics clubs at TJ, so that was a big help.”

One unexpected problem as a result of the large number of people at Techstravaganza was a lack of supplies, be it food or materials for activities.

“We didn’t really expect that many people to be there, so we would constantly have to go out on runs and buy more stuff at the local Giant on Braddock Rd,” WISE officer and junior Cat Nguyen said. “When we were there, I had to pay for it out of pocket, but then I got reimbursed.”

The event itself, though sponsored by the club, was strictly managed by students. Because of the amount of people that were attending the event, the students had to up their standards and make sure that they provided the best experience to showcase the school’s science and technology.

“I feel like no one really understands that this is completely student run,” Zhang said. “Our sponsor doesn’t really give us input except for taking care of stuff like purchase orders and other than that, we run everything ourselves. We coordinate exhibitors, we network with people at local STEM events every few months, we plan out activities to test in our club meetings every week, and of course, all the volunteer assignments. We get around 300 volunteers each year, and there are 3 shifts, so if you do 200 volunteers per shift, it’s like 600 assignments total.”

Some of the young people who attended Techstravaganza are aspiring scientists who have even set goals on attending Jefferson in the future.

“I would just say seeing all these kids with their friends and family just having fun and learning about STEM was the best thing about Techstrav,” Junior Katelin Chan, WISE officer, said. “Also, hearing 4th graders [and other young kids] talking about their goals to attend TJ was very cute.”