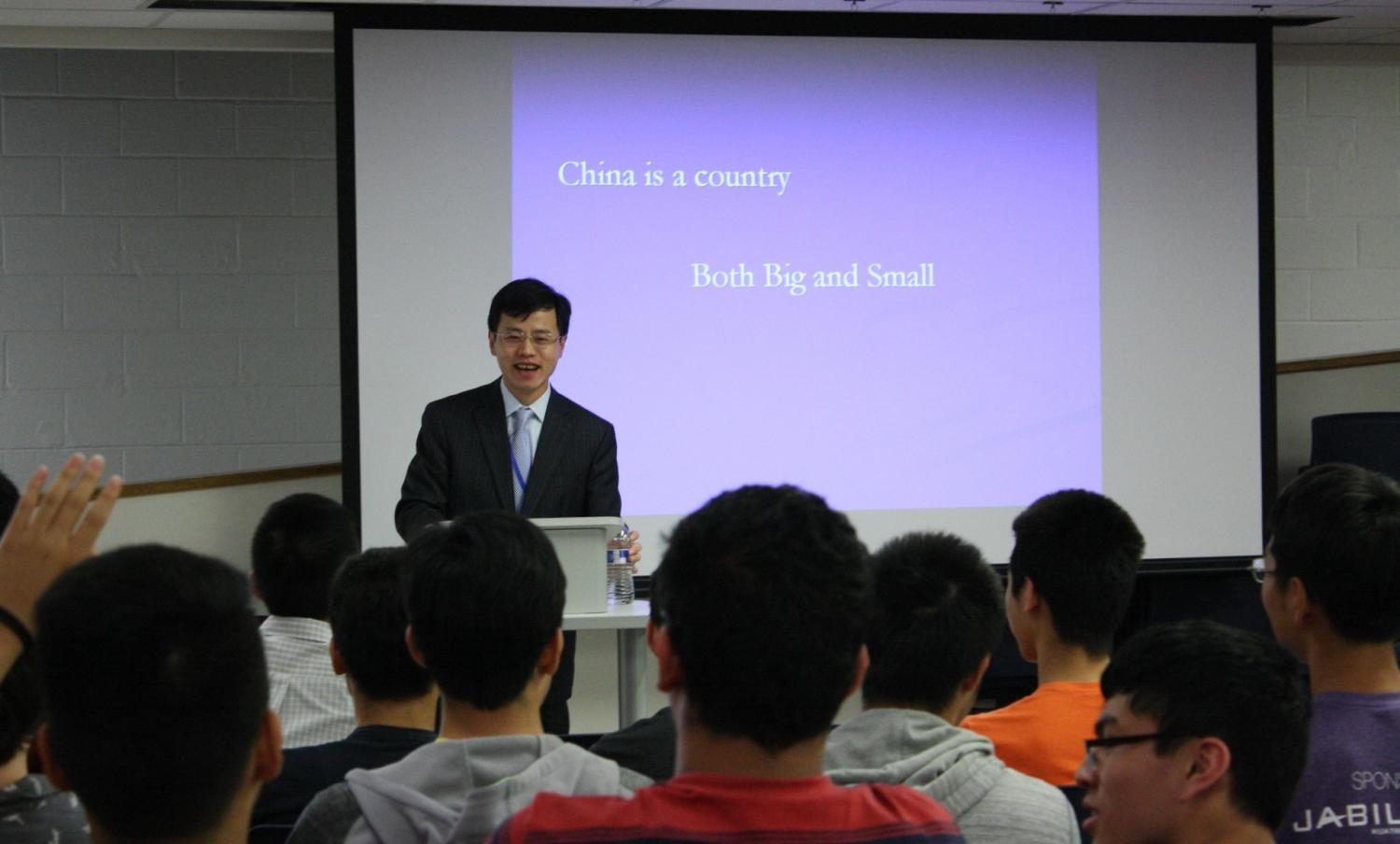 Tang explains the difference between the age of China’s cultural history compared to the youth of its modern political history to students.

“I came across this opportunity through some mutual friends and connections, and I reached out, invited him to come speak and he accepted the invitation,” Qi said. “I gave Ms. Xu viewpoints of what I wanted to talk about, mainly China-U.S. foreign relations and educational opportunities in China.”

“I do debate, and this year the topic was about China foreign policy with the U.S., so I thought this is a great opportunity to touch up on it,” Ji said. “I think a lot of statistics about what China is compared to the rest of the world [is interesting]. It could be this huge country, but if you take into account all the other different ethnicities that it can be considered a small independent nation that is unified by one geopolitical body.”

Tang hopes that by students having the opportunity to learn about and get involved with the topic of U.S. and China relations, these high school students will be able to contribute to a causes growing in prevalence today.

According to Tang, many students are starting to immerse themselves in foreign relations in high school; he has observed numerous high school students who are already involved in the topic and are poised to play a role in international relations in the future. Furthermore, Tang is positive about the future growth of China and hopes that more youth today will become interested in learning about Chinese language and culture.

“I hope that parents and kids can learn some Chinese,” Tang said. “Even Ivanka [Trump]’s daughter is learning Chinese, [saying] this is the investment of the future. China is a promising country and a country on the rise. I think there will be more exchanges between China and the U.S. in the days to come. It’ll possibly be inevitable in the future for kids to learn Chinese whether they want it or not.”

In order to stay on top of the ever changing relationship between the U.S. and China, Tang suggests several ways for students and parents to become knowledgeable about this significant topic.

In addition, Tang believes immersion of Chinese culture can also help broaden one’s perspective on US and China relations.

“Seeing is believing.” Tang said. “When you’re reading stories from media, it is a story edited by journalists, and that’s something you can’t see. So, visit China as a tourist. Try to persuade your parents or try to earn money yourself to purchase tickets to spend a week in Beijing and Shanghai, and have a look yourself.”