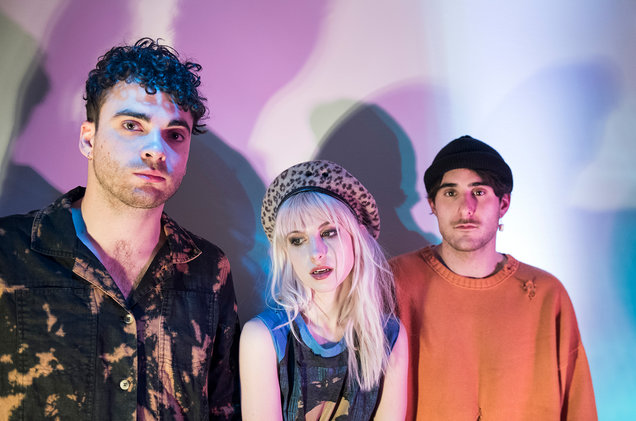 From left to right, York, Williams and Farro

If Paramore’s 2013 self titled LP was a step away from their original pop-punk sound in exchange for a more mature and introspective timbre, their newest record, “After Laughter” is a full departure. However, throughout lineup changes, the band, now consisting of vocalist Hayley Williams, guitarist Taylor York and drummer Zac Farro, has remained distinctly Paramore.

The album’s composition emits an 80s vibe, admittedly stronger in the earlier tracks as it lends itself to a more general pop sound in the middle, and a twist on the final tracks.

“After Laughter’s” lead single, an upbeat and lyrically reassuring track called “Hard Times” was released on Apr. 19. It was paired with a music video, featuring the band members among vibrantly colored sets and animations. The track’s composition emits an 80s pop vibe, contrasting lyrics that adhere more to the earlier, more angst-driven Paramore, with a chorus going, “Hard times, gonna make you wonder why you even try / Hard times, gonna take you down and laugh when you cry / These lives, and I still don’t know how I even survive / Hard times, hard times / And I gotta get to rock bottom.”

The album’s more subdued second single, “Told You So” and “Rose-Colored Boy” also allude to William’s pessimism to happier sounding instrumentals. Other songs, namely “Fake Happy,” are catchy and easy to sing along to, though they have a certain relevance, commenting on how people like to perceive Williams with her bright personality though her feelings are often negative.

The latter tracks are more experimental for the band, with a cascade of emotion in “Idle Worship’s” vocals, flowing into “No Friend,” a spoken word track in which MeWithoutYou vocalist Aaron Weiss tells the band’s history. The album concludes with “Tell Me How,” a softer song. Overall, it’s not difficult to call the album “good,” but besides the singles, few songs stand out sonically- they seem to fit together as a set. “26” and “Tell Me How” are touching upon reading their lyrics, but their melodies don’t quite differentiate from contemporaneous slow songs.

Without a doubt, Paramore’s ups and downs as a band are especially apparent in their lyrics, touching on subjects such as the controversial departure of Farro and original guitarist, Josh Farro, who had usually led much of the band’s writing and composition process, and more recent departure of bassist Jeremy Davis. There also have been fears that Williams, who had acquired substantial star power over the years, would eventually break off as a solo artist. However, with York now orchestrating much of the music and Williams continuing to promote the fact that Paramore is a band, the trio seems to be on a steady track.

And through all the past sentiments and low points that Williams sings about, “After Laughter” leaves listeners on an optimistic note, with the final lines, “You don’t have to tell me / I can still believe.”