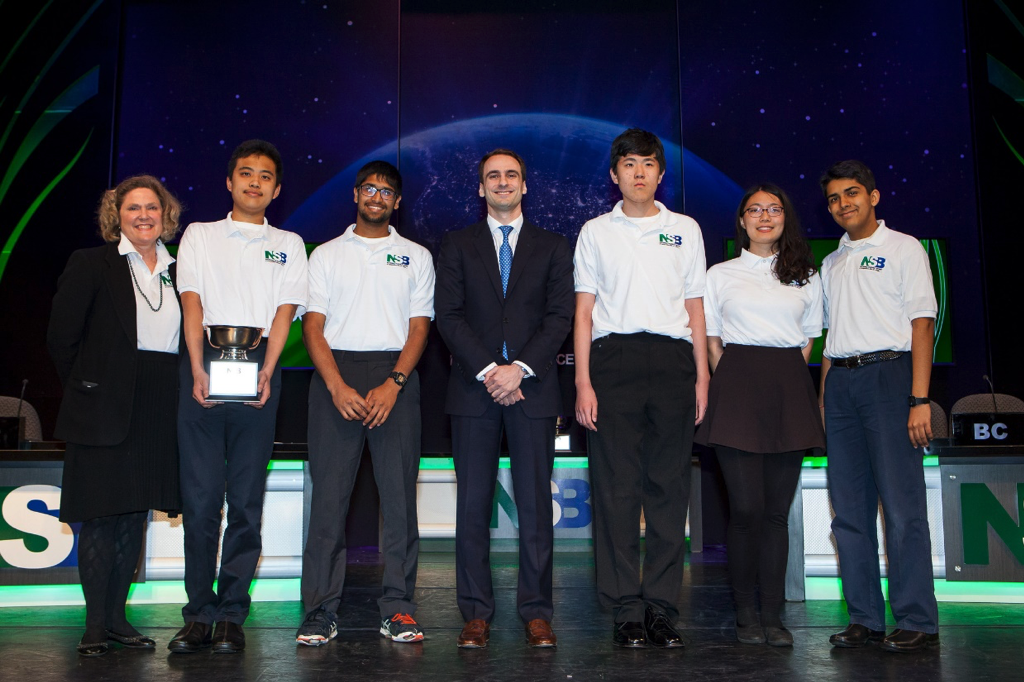 The TJ Science Bowl placed second in the 2017 National Science Bowl on May 1st. Managed by the U.S. Department of Energy Office of Science, the National Science Bowl is one of the nation’s largest science competitions with over 90 high schools and 50 middle schools competing in its regional competitions before the final national bowl. TJ’s Science Bowl consists of five members, Laura McConnaughey, coach, Franklyn Wang, Neeraj Prasad, Charles Wang, Joyce Tian and Aaditya Singh. Each have an interest and experience in science, mathematics, chemistry, and other STEM-related fields.

“I was on our middle school [science bowl] team in 8th grade. I really enjoyed it. I came to TJ and tried out my freshmen year and unfortunately did not make it. I think… part of the reason I didn’t make it was [because] in science, you don’t want too much subject overlap between people. So there’s already a math person or a chemistry person, you don’t want a second one necessarily,” sophomore Aaditya Singh said. “But this year, I tried out again. Ever since the start of the year, I’ve been with the team.”

Contributing to the dynamics of the team was not only the addition of new members this year, but also the familiarity between the science bowl competitors.

“We had a pretty intense practice schedule we practiced three or four times a week Sometimes at a person’s house but most of the time, [we practiced] at school with our sponsor. During the meetings… our assistant coach would read the question and we would practice answering science bowl questions with buzzers. Out of school, we just learned on our own our respective subjects and disciplines. Mostly we were just preparing for the olympiads that we were doing,” senior Neeraj Prasad said.

After competing regionally, the team headed to Washington D.C. for the national competition. However, they faced challenges as they lost once in the first round of play-offs, in which a double elimination format takes place.

“This year’s competition was far more competitive than expected,” team captain Franklyn Wang said. “Even in the divisional round, several teams were very strong and came close to knocking us out. We lost a game in the Round Robin phase and barely made the Top 16 as the 2nd place from the division. We lost our first game in Double Elimination, putting us in a situation of ‘Win or Bust’.” In spite of this pressure, our team proceeded to win 6 matches in a row, defeating both the team which had beaten us in Round Robin and the team which had beaten us in Double Elimination. Although we lost in the finals, I am very proud of my teammates for performing well under pressure.”

Prasad also found that the heightened competition in the National Science Bowl contributed to a sense of nervousness within the team.

“We were definitely very nervous at the beginning of the competition. We definitely made some mistakes as a result of being nervous. As the competition went on, we relaxed into it and start getting better and better,” Prasad said. “I realized that it’s okay if we lose we’re still here for the fun. As long as I enjoy it, I will do well. That’s the philosophy I used in double elimination, and I guess it paid off.”

Despite the competition, the team placed second in the National Science Bowl, receiving $1,500, a team trip to Alaska, and valuable experiences for future endeavors.

“This money goes to the school’s science departments. We plan to use it to sponsor more public STEM events in our community and to encourage younger students to participate in STEM fields,” Wang said. “Unlike most other academic competitions, Science Bowl has no individual awards, and only team score matters. In this sense, it is a great activity for developing team spirit. Every member of our team is an all-star in their respective discipline, whether it may be Biology, Chemistry or Physics. Despite this, during practices and competition nobody tried to be a hero and we always supported each other when someone made a mistake. This year’s difficult competition at Nationals taught us one more time the importance of not giving up. I feel that teamwork and being able to adjust in the face of setbacks are the most important lessons I gained from Science Bowl.”