The Met Gala: A boundary breaking theme and the art that resulted 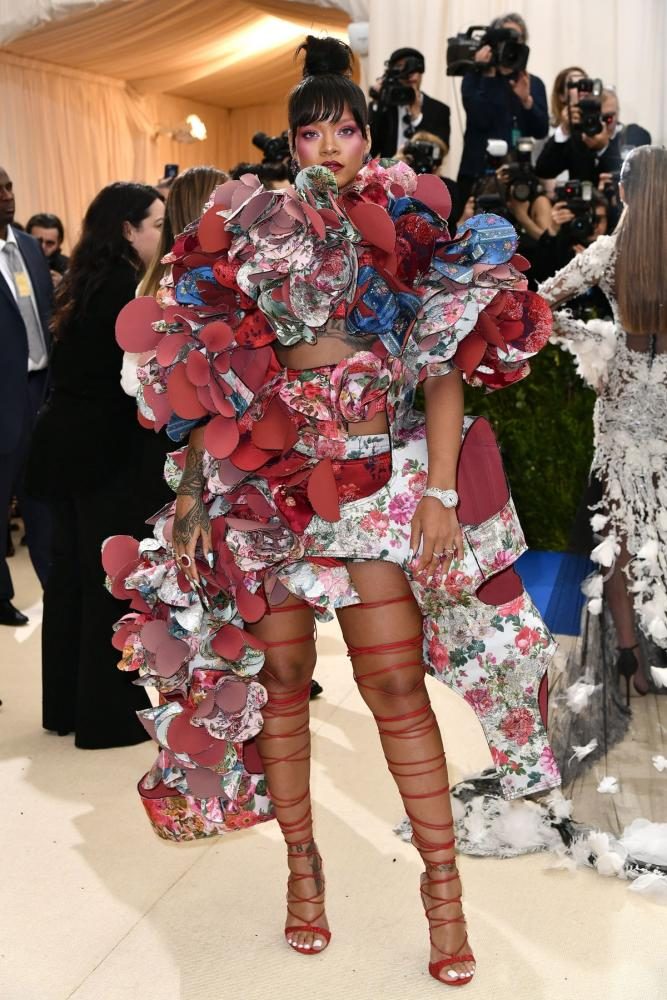 Every year there is a specific theme that the guests’ clothing should adhere to that pairs with the exhibit presented that year, from Costumes of Royal India to Savage Beauty, each year’s theme brings iconic innovation and eye-catching couture. 2017’s theme, Rei Kawakubo/Comme des Garçons: Art of the In-Between, broke conventional fashion boundaries with bulky outfits and with little intent to look pretty or sexy. All attendees’ looks had to be personally approved by Vogue’s Anna Wintour, which is no simple feat.

A major standout outfit was Rihanna’s, an eye catching, petal covered dress from Comme des Garçons’ 2017 couture line. She later took to Instagram to praise her own outfit and call out other celebrities for “boring outfits”. Another widely talked about celebrity was Donald Glover, who decided to pull out a pretty gorgeous floral print Burberry suit.

Other celebrities decided to keep their outfits on the more casual side, like Rapper A$AP Rocky and Off-White designer Virgil Abloh. Both decided to wear items some wouldn’t deem “red-carpet worthy”. Rocky, along with Ashton Santon, decided to preview Calvin Klein designer pieces, and Virgil Abloh rocked a Junya Watanabe t-shirt (which still adheres to the CDG theme) along with his unreleased collaboration sneakers with Jordan Brand.

One of the most interesting and polarizing looks was Cara Delevingne’s futuristic outfit. She decided to go with a shimmering Chanel suit, along with a risky “hair” move. The supermodel was spotted with a completely shaved head covered in silver. Delevingne took to Instagram and said “Beauty shouldn’t be so easily defined.” Jaden Smith also showed up with another unorthodox look, as usual. The young celebrity decided to show up in a dapper Louis Vuitton suit, skirt, and square toe heels. He also decided to carry around his cut dreadlocks, the highlight of his look.

The attendance this year was also surprising as well. Regular attendee Kanye West decided to skip the Gala this year due to his hospitalization last year. Celine Dion decided to make a Met Gala debut in a dazzling Versace gown and a black headpiece. And to even more surprise, singer Frank Ocean, a notoriously reclusive celebrity, attended the gala. He attempted to hurry across the red carpet, but was still spotted in an elegant two tone Balmain suit. Other than these standout occurrences, the usuals like Rihanna and Madonna showed up to the Gala this year.

Overall, this year’s Met Gala didn’t disappoint. The dresses were wild and the men’s suits were sleek as always. There were a lot of upcoming pieces from Off-White, Louis Vuitton, Supreme, and others that were previewed on the many attendees, which is exciting for a lot of fashion enthusiasts. Some of the designers that dominated the red carpet this year were Chanel, Burberry, and of course, Comme des Garçons. Fast fashion line H&M also made surprisingly elegant appearances on celebrities like Future and Nicki Minaj. And most importantly, a lot of money was raised for a noble cause while many great and unusual looks were shown off.