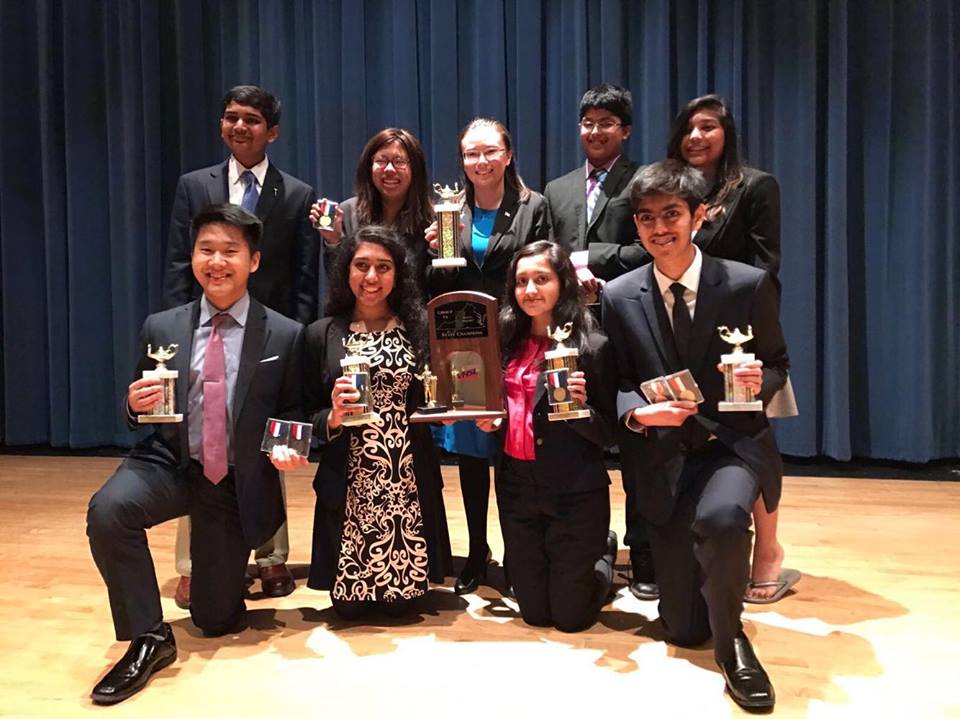 Jefferson Policy Debate team juniors Zulekha Tasneem and Gulnaz Sayed won the VHSL state championship for the 5A Policy Champions on Saturday, April 22nd, in addition to 5A student congress champion Victoria Bevard and 5A 1st policy speaker Ankit Agrawal. Before this tournament, Tasneem and Sayed attended the Districts and Regionals tournaments. The pair placed in the top 3 for Regionals, which qualified them for the States tournament. In addition, the Jefferson debate team also won the States tournament.

“Aside from each team that individually wins, based on all the wins and speaker points,the school that has the most winners and the ones that place the highest win sweepstakes,” Sayed said “So, TJ also won sweepstakes at States, in addition to my partner and I being undefeated at States.”

Despite both the school and the team winning States, the rigor of competition that the pair encountered at states was just one of many that the Policy Debate team encounters as the travel team competes at the national, state, and local circuits. Tasneem believes that the most difficult part of debating at states was judge adaptation, rather than the competition.

“It’s definitely a task on judge adaptation, because a lot of the judges don’t have experience with policy debate,” Tasneem said. “So, it’s hard to see whether or not they understand your argument;it’s more of an ability to reach out to the judge and persuade them.”

Gulnaz agrees that this tournament’s biggest obstacle was judge adaption as well, as according to her, it was “definitely a different competitive style, because a lot of the judges and stuff haven’t been exposed to a lot of the national competition.”

Furthermore, in addition to judge adaptation, debaters also had to adjust to the novel political and cultural environment that they experienced at VHSL States.

“We went further down south at Cosby High School in Richmond, where there’s a different environments, especially in the political sphere,” Tasneem said. “And you have to be careful with what you say, and the way you say it. So, it definitely gives you skills on approaching different types of people and making different types of arguments.”

Still nonetheless, winning this debate tournament was also an important milestone for the school: according to Tasneem, winning states and sweeping the top three speaker positions “solidified Jefferson as a team.”

“Just everything about that says the work we put forth with our new coach, my best friend, and just the work we put together as a team has really paid off,” Tasneem said.

Tasneem believes that the thrilling experience of the last debate tournament is something she will never forget – from connecting with past debaters to meeting new debaters, to even winning state champions.

“Overall, the experience was really great and it’s something I won’t forget,” Tasneem said. “Just the adrenalin rush of our own team; rekindling connections with past debaters who came down to judge; meeting new debaters from other schools; as well as finally being able to talk to some of the debaters here at TJ who are in different forms of debate.”