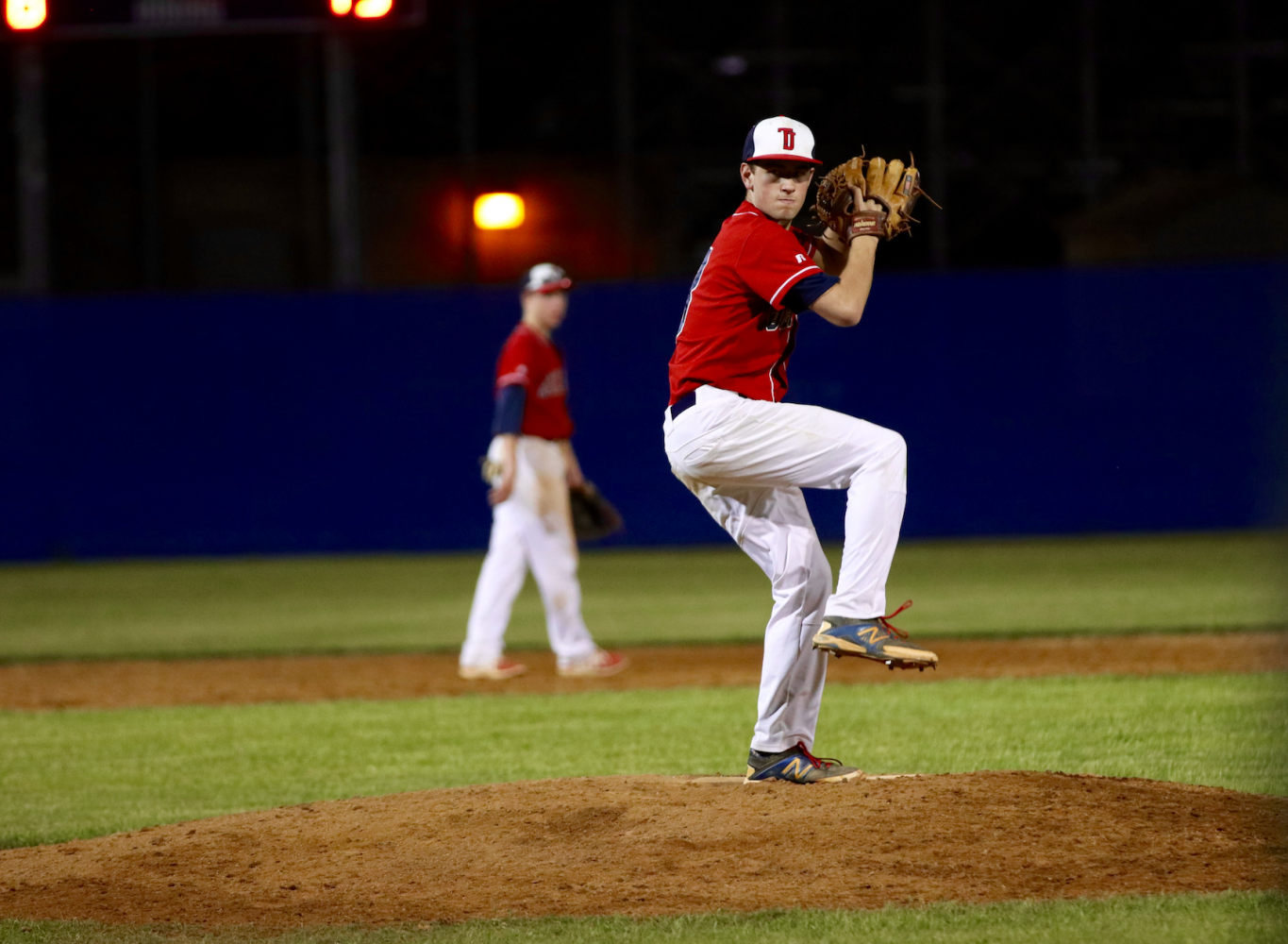 Relief pitcher Todd Hartman ends the game with a strong performance of 0 runs allowed for 2 innings. With strong efforts and determination by the players, Jefferson managed to defeat Falls Church 13-6. Photo Courtesy of Amritha Justin.

With a triple play, the Colonials ended the game defeating the Falls Church Jaguars 13-6. The victory came as a shock to both the players and the crowd, as Jefferson previously struggled with Falls Church, losing 7-8 in the beginning of the season. However, with high morale and confidence by the team, Jefferson took its 2nd consecutive victory, securing its position in the conference 13 tournaments.

Pitcher Ankush Joshi and 2nd baseman Andrew Yoon helped to secure Jefferson’s 2nd consecutive win against the Falls Church Jaguars. According to Joshi, he had a successful game, which included a 3-run homerun and 3 strikeouts as pitcher, but had to stay on his toes.

“I knew I hit it well off the bat, but I had to keep my emotions in control because I needed to prepare to pitch another inning,” Joshi said.

According to Yoon, the game united the team and gave them confidence for the playoffs, which begin

“The game on Friday was a true team effort to beat Falls Church, which is a pretty strong team. Each player contributed at the plate and on the field. From clutch hits to great defense, it was an exciting game for our team and showed what we are capable of,” Yoon said “I also felt confident in the game, and it just felt good to have a great game, as we make a playoff push.”

Jefferson opened the night, but suffered a double and a single in the 1st inning, which lead to a run for the Jaguars. However, the Colonials ended the inning by preventing a steal for home by the Jaguars. With runners on 1st and 2nd base, Jefferson soon followed with a triple, scoring a run. Max Lee then got a fly out, but allowed another run, soon followed by a double and a ground out, ending the 1st inning, but with Jefferson leading 2-1.

The Jaguars started with a strikeout, but managed to get 3 singles, scoring a run and tying the game at 2-2. With two outs and the bases loaded, the Jaguars looked to break the tie, and with a line drive to center, the Jaguars scored 3 runs in addition to an error by Jefferson. The Jaguars hit another single down the center and allow another run. The inning ended with a fly out to right field, but with the Colonials now trailing 6-2, defeat appeared inevitable.

“We started out playing sloppy defense and found ourselves in a 6-2 deficit, but we did a good job of fighting back,” Joshi said.

The Colonials began a comeback with a single to left field by Aiden Witeck and a double by catcher Rohan Cherukuri. With runners on 2nd and 3rd, Jefferson was in a position to score, and a single by Zachary Hershey brought in 2 runs making the score 6-4. Jefferson then grounds out, but allows a run. Todd Hartman then hits a double deep into center field and ties the game at 6-6. However, the colonials soon strike out ending the inning, but manage to tie the game.

The colonials quickly end the inning for the Jaguars with no runs. Jefferson then takes the lead after a wild pitch by the Jaguars. However, the inning ends quickly, but the colonials are now leading 7-6 from a 4-run trail. Jaguars were looking to tie up the game in the 4th inning, but Joshi ends the inning with a his 3rd strikeout and no allowed runs. The bottom of the 4th inning ended quickly after Jefferson failed to get a run, with 2 pop outs and a strikeout.

Jefferson’s ends the top of the 5th inning with no runs. With Jefferson up to bat and chances to increase the lead, a double and a single deep into right and left field doubles the lead to 8-6. With runners on 1st and 2nd Yoon then hits a single and allows a run, followed by a three-run homerun by Joshi, increasing the lead to 12-6. Jefferson then gets a double, but grounds out to end the inning. However, the Colonials had its most successful inning with 5 runs scored in the bottom of the 5th inning.

Joshi is replaced by Hartman as pitcher after 6 successful innings. With runners on 1st and 2nd and with 2 outs, the Jaguars are in a position to score. A failed stolen base ends the inning at 12-6 for the colonials. The bases are then loaded for Jefferson and manages to gets a pop out to left center field, allowing a run, but the inning then ends after a failed steal attempt. In the top of the 7th inning, the colonials made an amazing triple play and ending the game at 13-6, their biggest win this season.

“It was a great team win,” Joshi said.