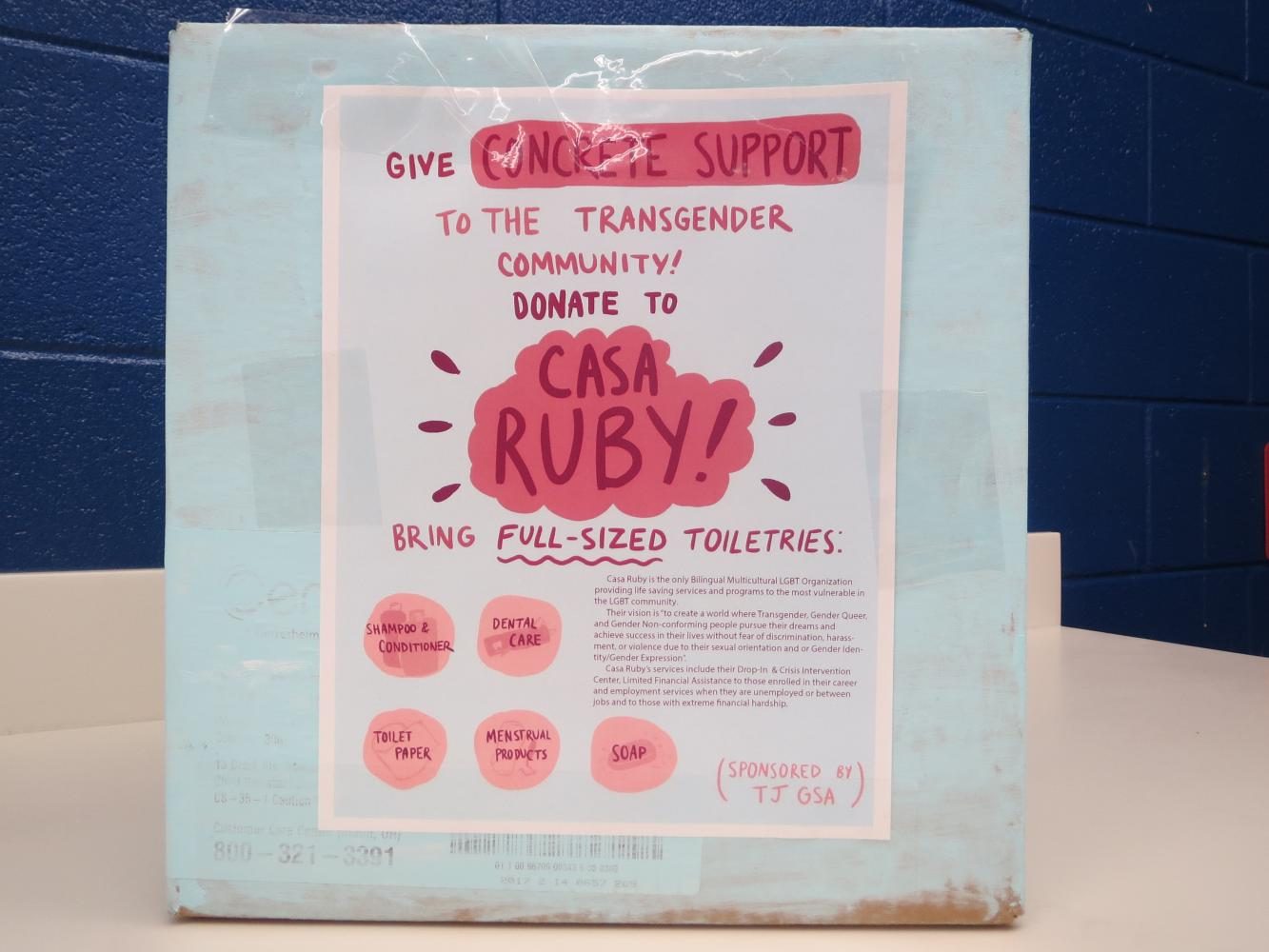 Casa Ruby, a Washington DC based organization, is home to volunteers and staff who provide basic human services to LGBT individuals in need. Their work has helped save hundreds of people, but their services aren’t always appreciated. On March 12, 2017 they were vandalised, an occurrence that had become common after the 2016 election, however this time it was different, the faculty had been targeted specifically and one of them was assaulted.

Jefferson’s Gay-Straight Alliance (GSA) has organized a collection drive to help show their support to Casa Ruby as well as allow students to get involved in a concrete way. From April 24 to May 10th, GSA is accepting donations of much needed sanitary items and toiletries such as shampoo/conditioner, dental care, toilet paper, menstrual products, and soap.

“My vision for this drive is to help provide hope and success for those that are vulnerable and marginalized by society,” Fae Young, a junior at John Champe HS who helped in the development of the drive, said. “Providing needs for people who can’t afford to pass; people prevented from getting jobs, being fired, or being promoted because they’re LGBT+; and providing support for the part of the world most often harassed and assaulted is important because often those needs aren’t met. Essentially, the drive is about mutual aid and its importance.”

Transgender rights have been an issue within the U.S. for decades, and while we have come a long way, hate crimes and discrimination are still prevalent in our society.

“Part of the GSA’s mission is to combat homophobia and transphobia, right now we’re focussing more on the transgender community,” junior Ash Rozzi, a member of Jefferson’s GSA and on of the drive’s main organizers, said. “This is where we are stationed and this is where we have some sort of power and ability to make change, so that’s where we’re coming from. When we first came up with the idea we weren’t really thinking we want the TJ community specifically to do something, it’s just that we are bringing awareness where we can.”

The GSA hosted drive is also being accompanied by a special two-block eighth period information session about transgender people how to be a good ally to them.

“Part of the raising awareness is an eighth period we are hosting on May 8th, and we have a presentation set up that is basically composed of how to interact with trans people and how to support you trans peers, friends, and family members,” Rozzi said. “That is a big issue we have identified, even people who want to support the transgender community don’t really know how or they don’t have trans friends, people to go to or ask, and since we’re an established organization we want to give them the information since that is to some degree what the GSA is set up for.”

Collection bins have been set up in the audlob, IBET commons, Nobel commons, cafeteria, and room 214 (Ms. Kochman’s room). All are invited to come attend the eighth period blocks, as well as donate any goods they can.

“I feel it’s a moral imperative. If you have things you don’t need, and someone else doesn’t have things they need, sharing and giving those things is a must,” Young said. “Also, giving back to the community gives a sense of purpose and perspective often lost in the drone of daily life and stress of schoolwork perfectionism.”