This I Believe: Experiences as an explorer 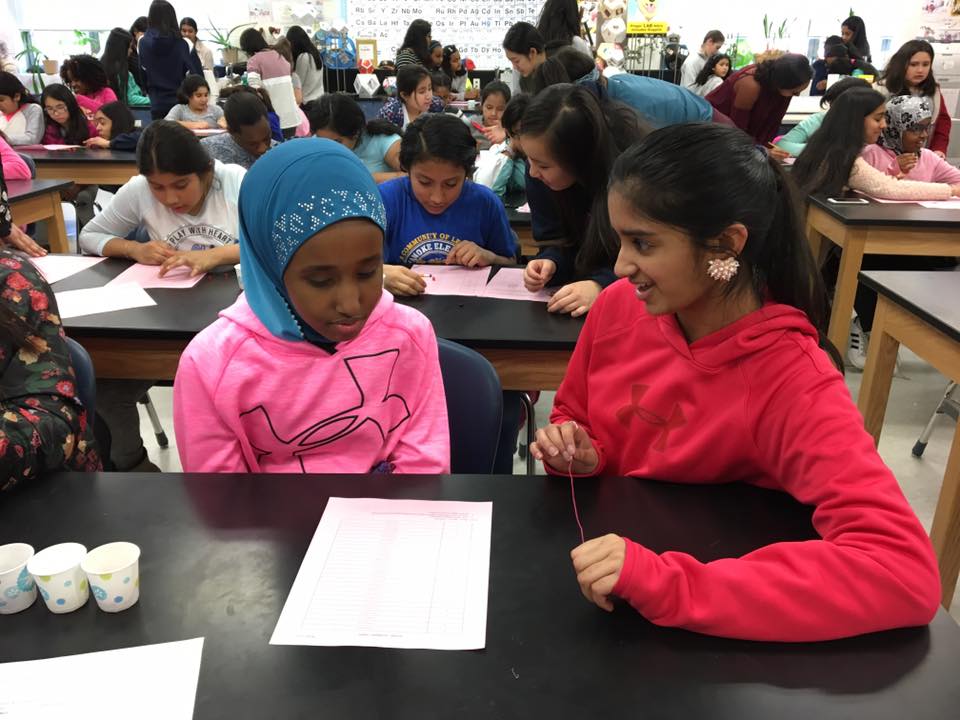 I make a binary bracelet with fifth-grader Bahja Osman during a Women Interested in Science and Engineering (WISE) meeting. Each color bead on the bracelet represents a different binary digit.

“This I Believe” is a nonprofit organization that encourages individuals to submit personal essays about their values and morals. This essay, modeled in a similar style, details my experiences with science.

Four years ago, I would never have considered myself a scientist.

From the first time I scribbled my thoughts on a crisp sheet of paper, I was a writer.
I penned my first work in third grade: an epic intergalactic tale starring three pre-teens discovering and exploring a new planet. The storyline was fairly basic, but it was the writing process that captivated me–the agency I had in determining the fate of my characters, in charting their progress from my mind to the paper. Without question, I was Adithi, the writer.
So how did I end up at a school for science and technology?

In my first year at Jefferson, I asked myself that question constantly. I certainly enjoyed science, and I didn’t regret my decision to come, but a piece of me felt missing. For the first time since my third grade interplanetary adventures, I didn’t have time to write creatively. In my mind, science and writing seemed so distant, like two halves of my personality I could never reconcile. I remembered the surge of anticipation that jolted through my fingers when I decided my characters’ fates; now, it was impossible for me to determine my own.

But in my sophomore year, I took a step closer to determining that destiny. I joined Jefferson’s Women Interested in Science and Engineering (WISE) club to mentor elementary school girls in science. My epic, movie-climax-style breakthrough occurred while my WISE buddy and I extracted genetic material from a strawberry. We painstakingly stumbled through each step of the process–I watched as my buddy extracted a muddy-colored solution from a mashed strawberry and dribbled the liquid through a coffee filter. When we tipped the cold rubbing alcohol into the solution, and a white film bubbled at its top, I heard a sharp intake of breath from the fourth-grader sitting next to me. The look of pure awe on her face at the sight of strawberry DNA was beyond description–it was as if she’d made a new discovery about the world.

And that’s when it hit me.

I had been so worried about losing my love of writing because I thought I had lost the feeling of exploration. But in this moment, kneeling beside an eager fourth grader, I realized something.

Science, too, was full of discovery–in fact, exploration was the essence of experimentation. Science is pressing deeper into uncharted territory, armed with a petri dish and a pencil. The addictive, all-consuming fervor with which I wrote was not so different from the gleam in my eyes as I slid on my lab coat and got to work. The two worlds I’d felt so trapped between were ultimately not only intertwined, but inseparable. I could–and did–have both.

It’s been a year since my earth-shattering epiphany. Have I drastically evolved since? It’s hard to say. But what I can say, with absolute certainty, is that although I’m not sure whether I will end up a writer or a scientist, I will always, inevitably, be an explorer.