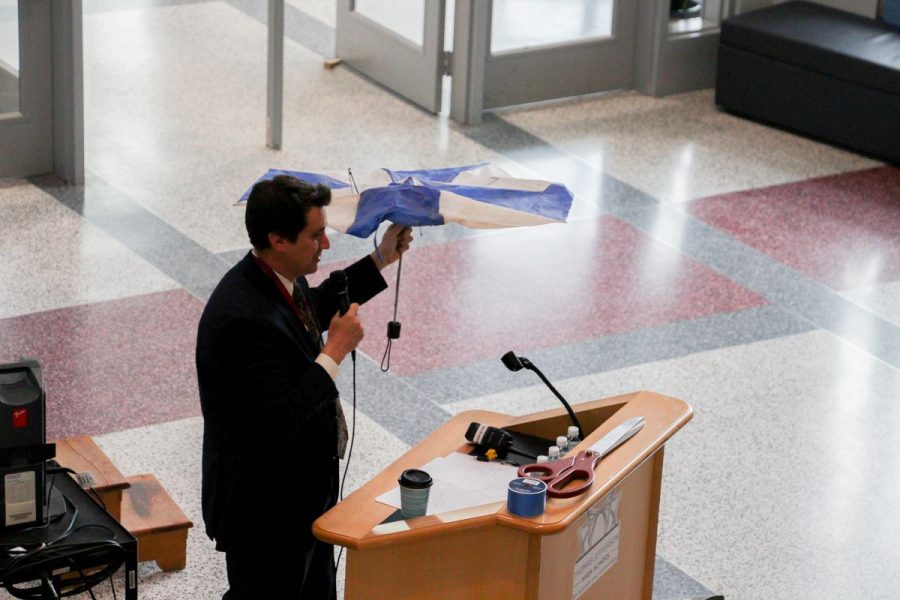 Photo courtesy of Angel Kim. Dr. Glazer holds up a broken umbrella during his speech.

To commemorate the end of renovation, Jefferson administration and students, along with members of the Fairfax County Public Schools (FCPS) school board and United States congressman Gerry Connolly, cut a ribbon by the entrance of the school on April 19.

During the event, several speakers gave short speeches about what renovation meant to them, including Laura Chu, the 46 student representative to the school board, Sandra Evans, chair and Mason district representative of FCPS, Connolly, and principal Evan Glazer.

During his speech, Connolly stressed the importance of STEM and discussed how it should serve as a major component of the government.

“My message to students was that science alone is not enough, you’ve got to get politically active,” Connolly said. “You’ve got to marry political involvement with your commitment to science so that we have a science-based government and public policy.

Connolly, who attended the very first meeting regarding Jefferson renovation in 2005, also spoke of the challenges that arose during its planning.

“12 years later, it’s really gratifying to see it,” Connolly said. “It’s a beautiful facility and it was a big challenge to try and fit what we needed on this footprint because it’s a very constrained site, and I think they did a marvelous job with designing it to do that.”

Connolly also posted a Tweet about the ceremony, using the platform to reiterate the importance of STEM education. 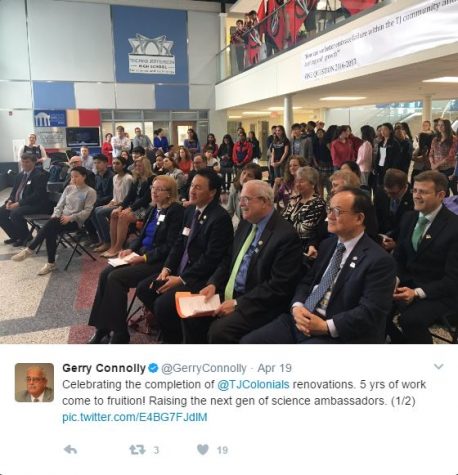 Avni Singh The first of two Tweets from congressman Gerry Connolly, who attended the ribbon cutting ceremony and also gave a speech. 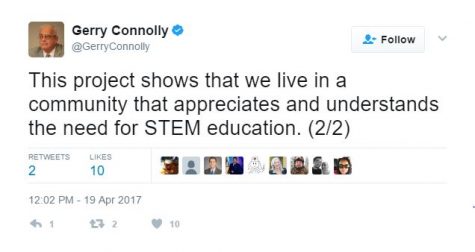 Evans, whose daughter is a 2009 Jefferson graduate, spoke of her personal connection to Jefferson and how the new building is leading the way in energy efficiency.

“TJ is a good place to lead the way,” Evans said. “It’s a science school, so to be able to lead the way in energy efficiency and in learning how to use our resources more wisely is a great statement of a school like TJ to be making.”

Evans also spoke of the more flexible learning spaces, such as the commons areas and courtyards, and how they will help facilitate learning at Jefferson.

“I think the flexible spaces are really where the future of education is going,” Evans said. “As Dr. Glazer said, there was a time when we had boxes and we put students in them, and we would line them up and somebody taught them. Now there’s a whole lot more fluidity and I think that that’s significant because we need fluidity in thinking and in ideas. We need for our students and our teachers to be able to interact in new and different ways, and you can’t do that if you just put students in a box.”

The day after the ribbon cutting ceremony, assistant principal Shawn Frank shaved his beard in the Nobel commons during lunch. In a morning announcement in 2014, Frank said that he would not shave his beard until renovation was over.

“I’ll be very happy when I shave my beard tomorrow,” Frank said on the day of the ceremony. “The reason why I grew my beard was because of the kids’ dedication to seeing everything through. The least I could do is just make some dedication and not shave for two years, so I’m very happy.” 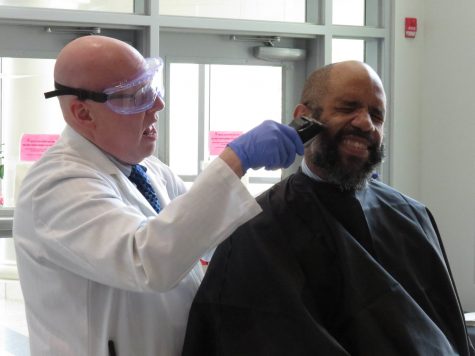 Frank, who was very involved in the whole renovation process, believes that, though the new building provides many new opportunities to the students, the greatness of the school lies in the spirits of the members of the community.

“Facilities are a conduit,” Frank said. “It’s all still going to fall on the kids and the teachers, because that’s really where it happens. I think this is all just a vessel. Of course, when you have new resources and new technology, it might make things a little easier and you might be able to do more, but when all is said and done, it all falls down to the staff and the kids – that’s what really makes it happen.”

Members of the color guard and cheerleading team were also in attendance and had the opportunity to represent Jefferson at the ceremony.

“Being only my second year here, I haven’t experienced renovation for nearly as long as the juniors and the seniors, but I’m very excited that renovation is done,” sophomore and member of the cheerleading team Christina Blake said. “I remember coming in for freshman orientation and there was just dust everywhere and everything was dark. Now everything is new and lit up and it’s just amazing to see how everything has been transformed.” 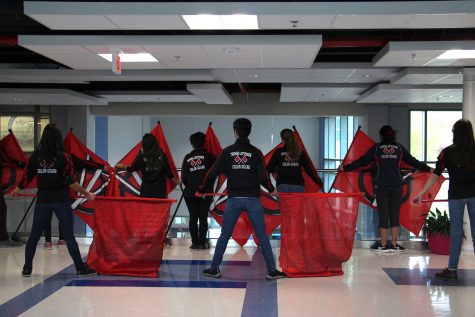 Photo courtesy of Angel Kim. Members of the color guard stand on the top level of the Nobel Commons in order to watch the ceremony and represent Jefferson.