Baseball’s popularity in the Jefferson community 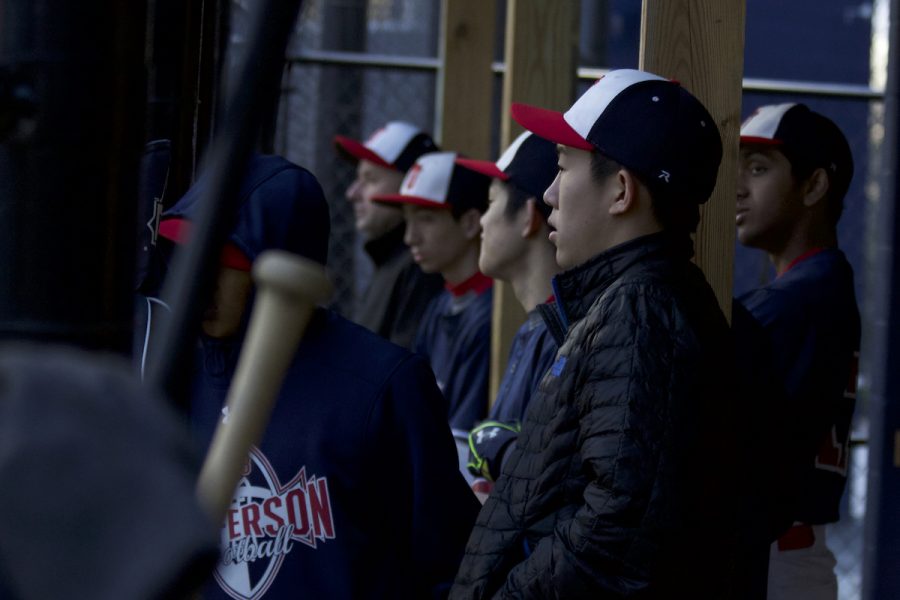 JV baseball team members support players on the field from the dugout during a game on Apr. 7.

According to the Sports Business Journal, baseball is the third most popular team sport in the United States. However at Jefferson, baseball and softball are some of the less talked about sports compared to sports with large participation such as the swim or crew teams.

With a large workload at Jefferson, students are more discouraged from trying out for a sport because of the sacrifices and time commitments they would have to make. Additionally, some people would not want to try a sport that they haven’t been playing for a long time beforehand.

“My impression of baseball is very American, I think of old movies in which everyone is into baseball, similar to how we are all into football today,” junior Mariam Khan said. “[But] I probably wouldn’t play on a team or anything because I never played as a kid, and I don’t think I could develop the skill now. Baseball hasn’t had a significant impact on my life so far.”

Despite the JV baseball team having a 5-0 winning streak this season, the team has a relatively small audience every game that can be attributed to other factors. Furthermore, the baseball team also receives a low turnout rate for games, averaging about 20 people per game.

“I think the reason why a lot of people don’t go is just because no one really talks about it,” junior Vanshika Narala said. “If there were more Facebook events for games or there was more TJ spirit for going to baseball games, I think more people would go. Also because it’s third quarter, a lot of people are stressed out and don’t have time to go to games.”

Basketball tends to get full bleachers for big games at the end of their season like at senior night regardless of their performance that season. To help increase fan turnout, varsity player senior Nakul Dar’s goal to win more games.

“One thing we want to do is start winning more games, so more Jefferson students will come out to support us,” Dar said. “I know for basketball, students would watch the games because it is a fast-paced sport and we won a lot of games. Hopefully, more people will come watch baseball games once we establish ourselves as one of the premier teams in the conference.”