A Symbol of Hope and Change 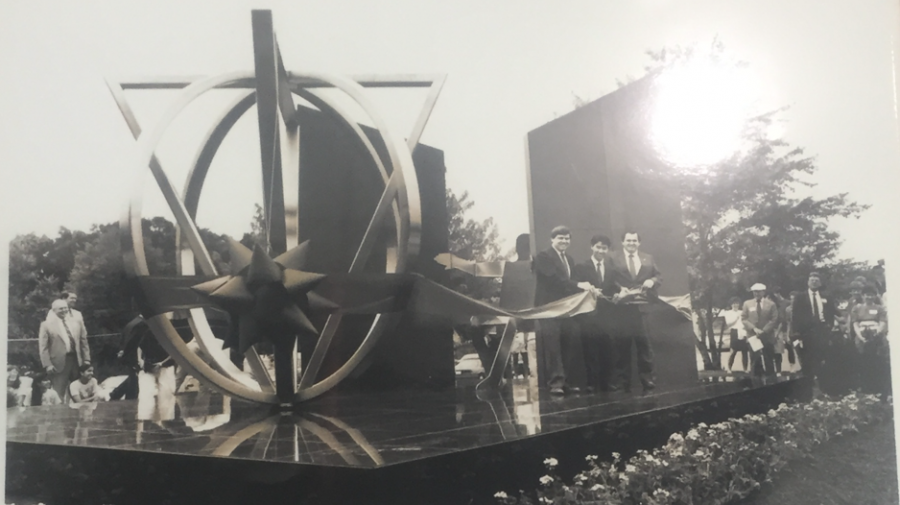 A photo of a photo in Jefferson’s display case. The photo is of the ribbon cutting ceremony held at the first unveiling of Thomas Jefferson High School.

Standing proudly at the entrance of the school, the Jefferson symbol shines in sun and rain, in the eyes of its beholders and into the hearts of the community. But though students pass by it every day on their ways in and out of school, few know its meaning.

The logo, titled “Today is Tomorrow”, was created by Bobby Koo, a graduate of 1989 during a design contest. The title itself references the challenges that Jefferson students overcome during their time there and how the process of succeeding will be useful to them when they graduate. Originally, there was a sphere in the design, but it eventually changed to include circles and triangles.

“The original inspiration came from the first principal of TJHSST – Ray Volrath,” Koo said. “I remember his address during freshman orientation when he said, ‘At Jefferson, we do not have problems. Problems have the connotation that there are no answers. Instead, we have issues. Issues are things we can work through.’”

According to Koo, the circle in the design represents the perfection that students strive for and the triangles represent the change (as in the commonly used delta) that they go through in order to obtain it. Adding on to what Koo said, Principal Evan Glazer said that the four corners of the pyramid represent the four curricular divisions: math and computer science, science and technology, humanities, and foreign languages and the arts.

“The greatest ideas are developed when we start thinking across those disciplines,” Glazer said. ”It gives avenues for students to tackle problems that don’t have known answers.”

By mingling disciplines in integrated courses like IBET or HUM, students learn ways of research and other methodology that allow them to take on problems that don’t have known answers. The education that students receive influence not only their thinking and habits, but also the impact that they will have on global society in the future.

“It symbolizes that education opens the gates to a global society where the most creative and innovative ideas are developed through the intersection of disciplines,” Glazer said.

The deceptively simple symbol hold a complex meaning and a strong hope for the future of the students, but that isn’t what is most amazing about the Jefferson logo.

“What’s amazing is that this is 1989, and these principles are still upheld today, 28 years later,” Glazer said.