Quizzing outside of the classroom 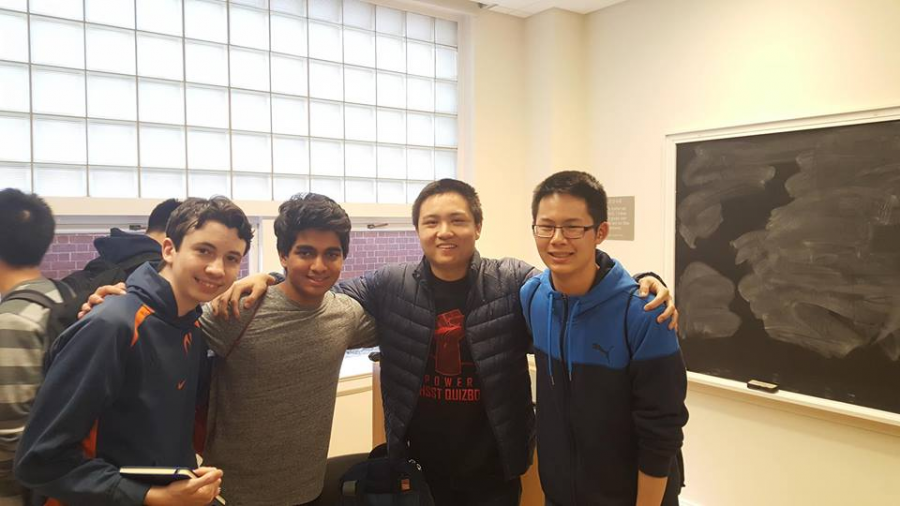 The Quizbowl A team takes a picture after winning the competition. (Left to right) Alex Howe, Rohan Hegde, Fred Zhang, and Grant Li

A total of 34 teams attended the Virginia State Championship hosted by the National Academic Quiz Tournaments, LLC, and out of the 34 teams Jefferson teams A and B, placed first and third respectively. Four other Jefferson teams competed as well. The tournament took place at the University of Virginia on Apr. 1.

Quizbowl is a Jeopardy style game in which students answer questions from a variety of categories. It tests participants’ knowledge in not only math or science, but also literature, art and sports.

“Quizbowl is similar in spirit to Jeopardy,” freshman Sohom Paul said. “But rather than questions on a screen, toss-ups are paragraph long questions that are read, with either team able to buzz in at any time at which they know the answer. After each toss-up, the team that answered correctly is read three bonus questions. There is also a greater focus on questions about literature, art, history, and science than you would see in a typical episode of Jeopardy.”

According to the players, just like any team activity, Quizbowl is based around teamwork.

“I think winning the tournament showed how balanced our team was and how well we worked together,” junior and captain Rohan Hedge said. “In Quizbowl, one person can’t get enough questions to win the tournament by themselves, and each of our team members made valuable contributions throughout the tournament.”

Through teamwork, all the Jefferson Quizbowl teams were able to have success and the novices were able to gain experience for future tournaments.

“TJ A won tournament,” Paul said. “TJ B and TJ C did exceptionally well. TJ D which is my team, TJ E, and TJ F did not finish in the top half, but we played well and got good practice for future Quizbowls.”

Although the Jefferson team had a high turnout, there were nerves going into the tournament due to the fact that they were considered the frontrunners and were expected to do well. In addition, their performance would have implications for their upcoming national tournament.

“We were the heavy favorites going in and I wanted to uphold our standard of excellence especially since this was our first time playing our full A team lineup,” Hedge said. “I also knew that we had to do well since this tournament would be a major factor in our seeding for both national tournaments.”

The team also hopes to improve their skills for the next competition and to be able to win more games in the future.
“We had a few close games, but most of the games we won [were] by a decent margin,” Hedge said. “Ironically, our weakest subject right now is science, so we will make sure to study up on that. Our next tournament will be on April 29th at Georgetown University.”