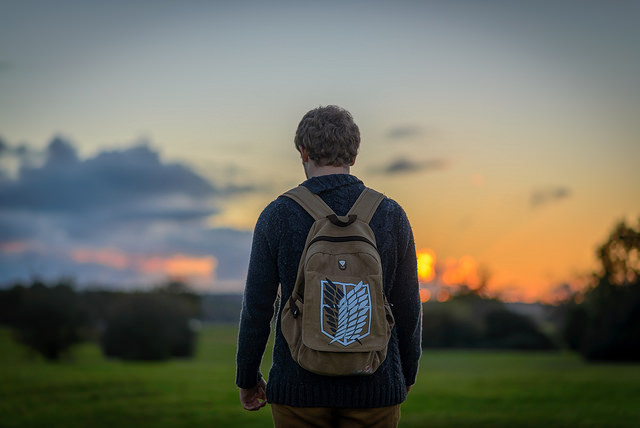 A young man wearing an Attack on Titan backpack. Photo courtesy of Rowan Gillette-Fussell from Flickr.

There have been many popular adaptations of manga and light novels over the year, but the most famous still has to be Attack on Titan (AoT). AoT burst onto the scenes with its anime adaptation in 2013, capturing the hearts of many, both those that were anime fans and those who weren’t. Much to their horror, though, four years passed without the release of the second season. Meanwhile, many other wonderful series were adapted, including the well loved Boku no Hero Academia (BNHA), famous for its unique take on the overused superhero cliche.

This Saturday, the first episode of the second season of both episodes came out, sending the internet into a frenzy of movement just a few minutes later. While at first one would think that AoT would be better received – after all, it came first and has a more devoted following, here’s what I realized after watching both series’ premiere episodes: both shows are equally good and bad, albeit in different ways.

As one of the most anticipated series of not just this season, but 2017 as a whole, AoT comes with a lot of high expectations. However, there is no doubt that it meets those expectations on the artistic side. Its animation studio, Wit Studio, has stepped its game up by cutting out shortcuts that marred the previous season to make room for detailed backgrounds and consistently high quality animation.

On the other hand, the plot seems a bit tepid. There are interesting hooks as more information about the Wall Titan is given and the Beast Titan is introduced, but as the soldiers are splitting up, I don’t believe that we won’t get to the meat of the content soon. This season’s orchestration is most certainly a let down for AoT, though. It never quite captures the dramatic spirit that the first season had, even at its best. The new opener is definitely a step down from either of the past two openers.

That’s where the first main contest to BNHA can be seen. Its new season perfectly captures the same spirit that flowed through the previous one. Some may say it just comes down to classic high spirits of action, but I’ve felt that BNHA has done a great job transcending that and don’t see it stopping anytime soon. It isn’t just about striving to become stronger or be the best, though for this genre it’s not completely unavoidable, it’s still about being a hero at heart. And in that regard, it continued its same flair far better than AoT did.

The animation is still up to par, but the backgrounds suffered and the character’s designs have become more ordinary as well. But as the goal was always to capture the scenes in a more “comic book” way, the visuals serve their purpose well enough. What really concerns me is that from what I’ve heard, this season will be spending most of its time in the sports festival, as it’s easy for shonen shows to get bogged down from endless cycles of contests.

Coming back on the same day as one of the most anticipated sequels may not be the best timing, but BNHA’s upbeat “anyone can be a hero” optimism works as an emotional counterweight for AoT’s “we’re all gonna die” vibe. Meanwhile, AoT’s mix of propulsive threats, action tropes, and almost gleeful violence make it the same show that we all know and love. My hopes for these series haven’t exactly been let down, and I’m excited to see how they will proceed.