Zarqa Nawaz: Portraying Muslims in a positive light through comedy 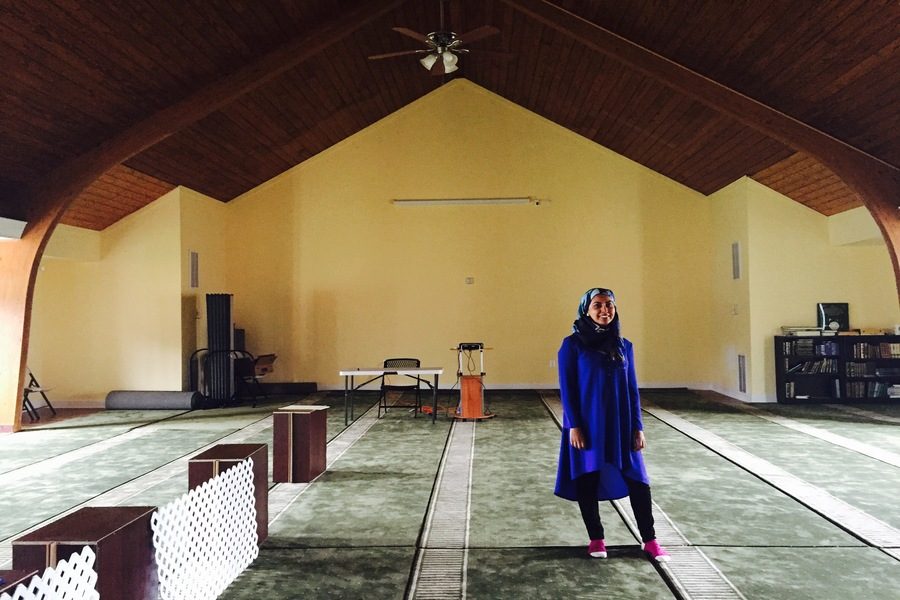 At McLean Islamic Center, Nawaz lectured about her family's past, working in the media industry, and her opinions on how to fight back against Islamophobia. 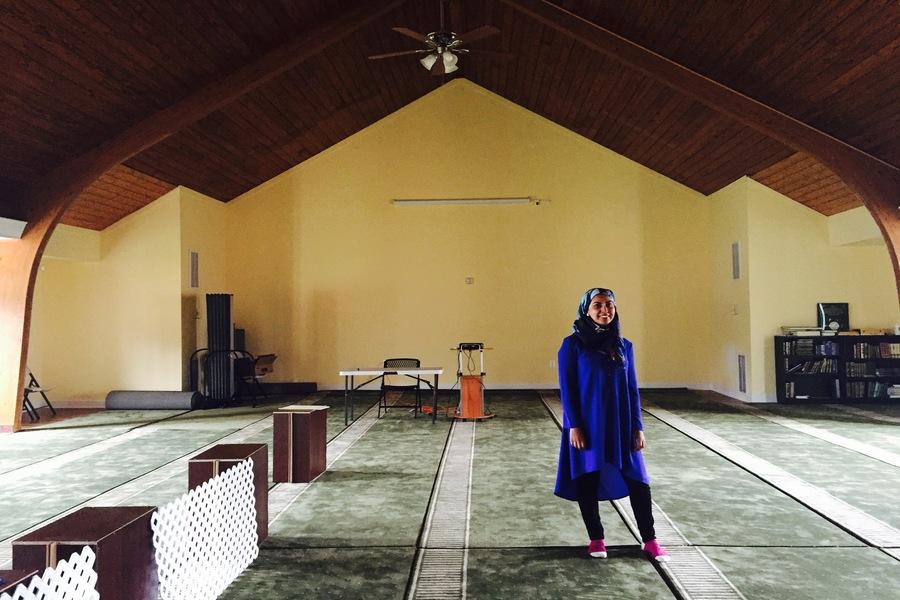 At McLean Islamic Center, Nawaz lectured about her family’s past, working in the media industry, and her opinions on how to fight back against Islamophobia.

Zarqa Nawaz recently completed her Washington D.C. book tour focused on her novel “Laughing all the Way to the Mosque.” The memoir, recipient of The Stephen Leacock Award for Humour, highlights her comical personal experiences living as a Muslim.

British-Canadian Nawaz is also writer of the television sitcom “Little Mosque on the Prairie” (Little Mosque), one of the first that features Muslims living alongside other faith and community groups.

In her work, Nawaz applies humor on Muslims, which unexpectedly opens doors for non-Muslim watchers and readers to better understand Islam.

I spoke to comedian Nawaz about her identity and creative endeavors, as well as her thoughts on the current rise in Islamophobia. Dressed in a hijab, Nawaz cites this fashion statement as “less a religious dress code at this point in my life, but sort of a political identifier as belonging to a Muslim community that’s under siege right now”:

Q: What is your main mission in life?

A: My mission in life is to always write funny stories and entertain people, and be able to put out material that people find enjoyable and relatable. And to be very good at story and comedy so that I can continue honing those skills and choose different avenues to express them — I’ve done documentary, I’ve done short film, I’ve done a television series, I’ve written a memoir, I’ll probably be doing a novel next. To continue challenging myself and to grow as an artist.

Q: How has your environment shaped who you are today?

A: [I am] in a faith community, and in a wider non-Muslim community that cares deeply about gender issues and social justice. I looked into my faith to make sure those are the issues I believe in, and bring out and practice within my faith community. I’m always vigilant about gender issues — gender equity, feminism — so it’s important for me that we bring out these principles in Islam and that they reflect how mosques are functioning: how the power structures in our communities are set up and that they’re always fair and ethical.

ON “LITTLE MOSQUE ON THE PRAIRIE”:

Q: What was the reason you wanted to create “Little Mosque on the Prairie”?

A: I made a documentary called “Me and the Mosque” and I wanted to talk about how you can have a mosque that’s more focused on gender equity. I thought it would be really cool if the imam (person in a Mosque who leads prayers) cared a lot about women and their rights in faith communities. So [the imam in “Little Mosque on the Prairie”] gives up his law career and becomes the new imam and that’s his focus.

Q: Can you please share your opinions on the importance of having a positive voice in the media for Muslims, especially in today’s environment of fear-mongering and bigotry?

A: People always ask me the question, ‘Did ‘Little Mosque’ really make a difference? And do you know how much of a difference it made?’ And up to this point, I really didn’t know. How do you know? How do you measure?

I got a call from CNN one day when I was shopping in Walmart, and they said, ‘Did you know your show was actually studied by a sociologist at the University of Wisconsin-Madison?’ What the sociologist had done was take six episodes of the show “Friends” and six episodes of “Little Mosque” and she measured peoples’ attitudes and prejudices about Muslims [having] a control group watch “Friends” and another group watch “Little Mosque.” And, lo and behold, [the rate of prejudice against Muslims dropped for the] group that watched “Little Mosque on the Prairie.” What [“Little Mosque on the Prairie”] did was show you could make a measureable difference in how minority groups are treated by television shows. That [television shows] actually make a huge difference and they are scalable, because millions of people are watching [them].

Q: What was the biggest pushback for “Little Mosque on the Prairie” from Muslims or non-Muslims?

A: In Canada the biggest pushback was from my own mosque community in Saskatchewan, because they weren’t really sure what was going on. You could imagine: in 2007, when there was no media representation that was positive for Muslims at all, suddenly this show comes out of the blue and it’s huge. The Muslims were unsure of what was happening. So [my mosque community in Saskatchewan] came out with a petition saying ‘She has shamed Islam’ and they presented it to the board. The board was like, ‘Well, what are we going to do with this?’ It took about two or three years for the community to calm down, and this Islamophobia that was rising was really helpful to me, because [Muslims] were realizing that [the show] was normalizing them. So many non-Muslim friends would come up to them going, ‘That show reminded me of my own community and it’s so great I learned so much about your faith.’ I found that the more Islamophobia there was, the more appreciation of the show there was. So it’s interesting: they come full circle in their attitude towards a television show.

ON “LAUGHING ALL THE WAY TO THE MOSQUE”:

Q: What inspired you to write “Laughing all the Way to the Mosque”? How long did it take?

A: I decided after [“Little Mosque on the Prairie”] ended it was so exhausting flying back and forth [for six months, filming the show]. I thought, ‘It would be so awesome to live in my own home and be involved in local community politics, with local Congressman and politicians. The big thing in where I live in Saskatchewan is the rights of First Nations people. There’s been a great deal of discrimination against that community, particularly by the Canadian government. The whole issue of cultural barbaric practices: 100 years ago, the government had removed children from their parents homes and put them in residential schools to they could get rid of their culture and religion and faith, and force them to become westernized. It caused a whole generation of trauma for the First Nations community. So for me, it’s really important as Muslims to be involved in our community at a local level. Dealing with ‘How do we help and be part of a positive community dialog?’ with First Nations. I really wanted to forge those relationships in my community, and work with local activists.

In order to do that, you had to live where you work, right? I [also] wanted to just stay home for a while, raise my kids, see them. Spend time with the local mosque community. And so I got a [book] deal to write “Laughing all the Way to the Mosque,” which was a memoir about growing up as a Muslim. It took about two years to write. It was a really tough book to write. Partly because you feel that you can make more of a difference if you are a serious, hard-hitting writer. So I tried to make the book more intellectual, and my publisher was like, ‘No, it’s terrible. You’re a comedy writer, just write comedy, write what you know. Don’t break out of the box.’ And so each chapter is like an episode of a TV show because that’s how I had been trained as a writer.

But it’s hard, because you have to give up all this anonymity about your life — now people know so much about me. I feel like you have to expose sort of the inner workings of a Muslim family in order for people to understand us as people. Because what a lot of non-Muslims will say to you is, ‘Oh my God, the stories with your mom, your mother-in-law, your kids — these are all our stories.’

What surprised me the most about this show and this book is that anyone who comes up to me, who is not Muslim, says, ‘You know, we have the same stories — we have the same characters, we have the same people. We’re not really different, it’s universal.’ Human beings are all the same, it doesn’t matter what their religion is. At the core we all follow archetypes, and we all function the same way and disrupt our communities in the same way.

Q: How do you think that Muslims are perceived in today’s world?

A: Islamophobia is a huge problem. Where, I was told, the bottom of the barrel when it comes to approval ratings. It’s not seen in a very positive light, so it’s a challenge to our community to overcome these stereotypes. To reach out through art and interfaith and civic engagement to let people know who we are and what we represent and why we’re just as loyal as everyone else.

Q: Some politicians, including Donald Trump, have made multiple insulting comments toward Muslims. In June, he reinforced that he wanted to “temporarily ban Muslim immigration.” What is your response to this?

A: I think they’re racist and xenophobic, and that they’re wrong. America has been made great because of its diversity of its cultures and faiths and communities. This is just pandering to a racist sentiment. I mean, to go back to the history of America and its founding, it’s a nation of immigrants. That is what has always made America strong, and [people should] remember that.

To learn more about Nawaz, visit her website: http://www.zarqanawaz.com/