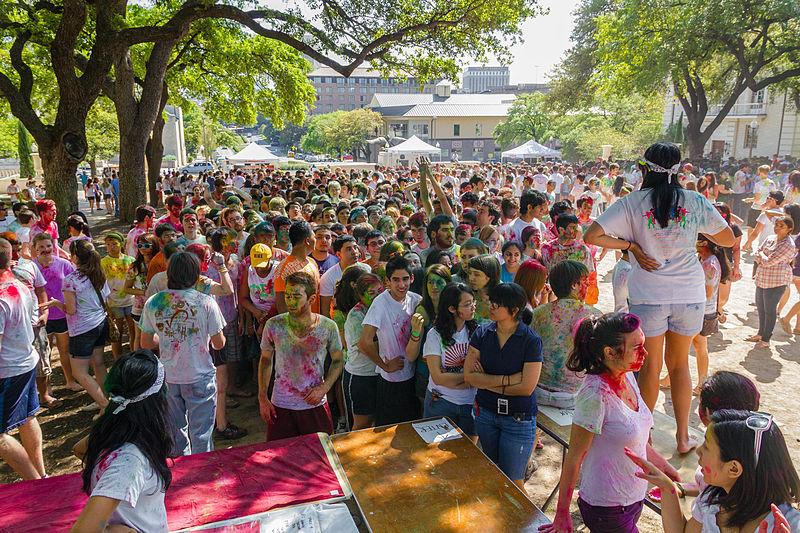 Students at the University of Texas at Austin celebrate Holi in 2012. Photo courtesy of Flickr user Karen Dodia, CC BY S.A. 2.0.

Vibrant colors shoot through the sky. Everyone is covered with bright shades of each color in the rainbow, and the sky is obscured by a thousand different hues of happiness. This scene filled the streets and backyards of many Indians across the globe, as they celebrated Holi, the Hindu festival of colors. But as we throw those colors into the air, do we know why we are doing so? What is the meaning of Holi, and why do we celebrate it?
While I do identify as a Hindu, I grew up with very little exposure to the religion. I did not celebrate my first Holi until freshman year at TJ, and to date, I have no idea what the religious backing is to the festival.
As a first-generation American in my family I feel like I have lost some important cultural roots. Obviously, I am proud to be both an Indian and Hindu, but often I feel as though I celebrate important Indian holidays without understanding the religious meaning of them. Holi is one among many festivals that I, and many others, blindly participate in.

Students at TJ have mixed opinions as to whether it is justifiable for Holi to be celebrated without understanding the religious roots behind it.

“I think that as more people have started to celebrate it, they have started forgetting the reasons behind Holi,” junior Tanvi Haldankar said. “I think that it is important to keep in mind why it’s being celebrated and learn from the stories behind it.”

On the other hand, some students feel that it is okay that the holiday has become generalized, as long as those who participate in it respect the culture.

“It doesn’t bother me at all that people celebrate Holi for fun because that’s what the festival is about – it’s a time to bring color and love into our lives, and if by including everyone we are able to spread color and love, then I think that’s amazing,” junior Kanvi Shah said.
I feel that, especially at TJ, events like iNite unite our different cultures and foster respect for a variety of different holidays. Although I don’t completely understand the roots of Holi, I feel that participating in it plants the seeds to embracing that part of my culture.