“Feud: Joan and Bette” – A story within a story 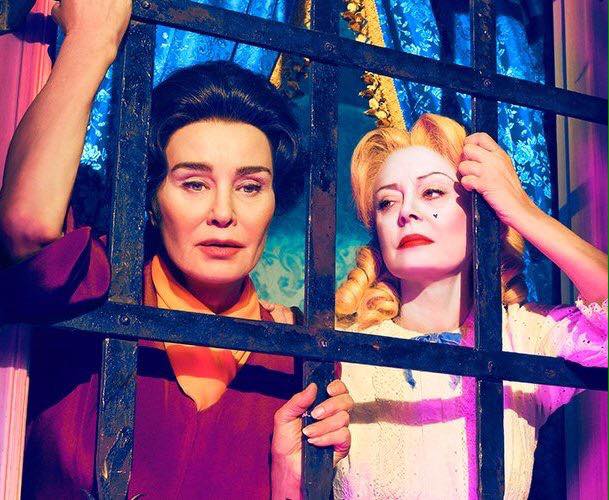 Characters Crawford and Davis are pictured on the show's poster.

FX’s new series “The Feud: Joan and Bette” airing at 10:00 p.m. Sunday nights is based on the real life feud between Joan Crawford and Bette Davis. Crawford and Davis are actresses best known for their performances in “Whatever Happened to Baby Jane,” an iconic 1962 psychological thriller about two aging actresses, named the Hudson sisters. This cult classic is the story of one sister, who is wheelchair bound, and the other sister, who is in the throes of mental illness, as her caretaker. The sisters’ dysfunction is on full display as the melodrama, filled with old wounds, jealousy and lies all play out.

The stars of “The Feud” are Susan Sarandon as Bette Davis and Jessica Lange as Joan Crawford.  Together, they portray the Hudson sisters, the lead characters of the classic movie thriller “Whatever Happened to Baby Jane.” The story begins with Crawford, a widowed, aging and acclaimed Academy Award winning actress dealing with debt in the early 1960’s. Unable to find work in Hollywood due to her age, she embarks on a mission to find a role in which she can adapt to the screen to show her acting skills. She finds the book “Whatever Happened to Baby Jane” and decides to get her rival, Davis, to star in the movie.

The first fifteen minutes of the first episode of “Feud” are somewhat slow, but improves as the plot gains momentum. Lange is a dead ringer for Crawford, capturing her insecurities as an older actress in youth-obsessed Hollywood, as she applies one beauty product after another in hopes of holding her wrinkles at bay. Sarandon is excellent as Davis, strong and confident, and importantly, she captures the essence of the character Baby Jane’s craziness during the last minutes of the first episode. Her appearance reminds those viewers, who are cult followers of the movie “Whatever Happened to Baby Jane,” why they chose to watch “Feud.”

The chemistry between Sarandon and Lange is excellent, though this series might not be for all, being a Shakespearian story within a story. Those who enjoyed the original “Whatever Happened to Baby Jane” will find this series entertaining, as an insight into the making of the original movie, while those who are unaware of the original movie may find it hard to follow unless they do proper prep work and watch the movie before viewing “Feud.”