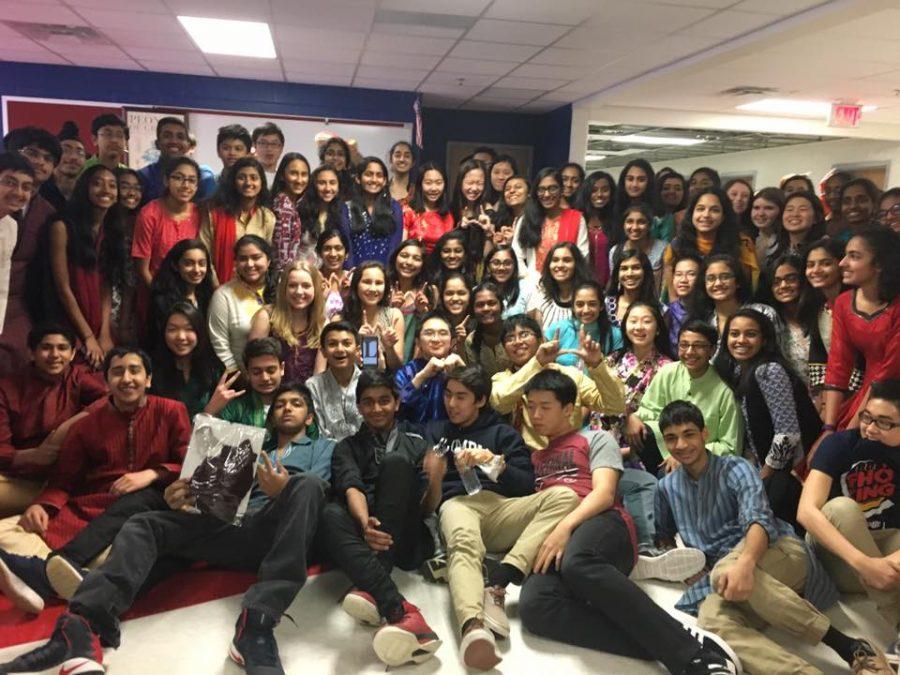 International Day was one of the many spirit days where students connected through their differences. Photo courtesy of Monica Saraf.

Students milled around the Jefferson building in traditional clothing of cultures from around the world, taking picture after picture with their fellow classmates. This was a common sight during Namaste’s annual International Day, held on March 10, two days before iNite. It was one of the spirit days that made up the SGA-held diversity week from Mar. 6-10.

Throughout diversity week, students dressed to represent a different cause to spread awareness, with rainbow for the LGBTQ+ community, black for racial equality, red for gender equality, blue for religious equality, and traditional cultural clothing as part of International Day.

“The main goal of this week is to help raise more awareness about diversity because often people don’t really think much about it,” class of 2020 co-senator Ankit Gupta said. “They might care a little more about breast cancer and other different types of awareness, but really truly diversity week is very important because we’re all different, and we all have different ethnicities and races, so it’s important for us to learn more about each other.”

For many students, diversity week was a fun way to connect with classmates through a mutual support in causes such as gender equality and racial equality.

“I participated in most of [the spirit days] because I really think that it is important to show support for each of causes that were represented throughout the week,” sophomore Serena Xia said. “Overall, [diversity week] has been quite successful and nearing the end of it, I was glad to see that more and more people were participating.”

The SGA chose to hold a diversity week this year in order to highlight the uniqueness of those in the Jefferson student body.

“Diversity week is a special week at TJ because it allows all the different types of people from different diversities here at TJ to really bond and to learn about each other’s diversities,” Gupta said. “Usually in many other schools, the people would only focus on their own diversity or their own religion, but the diversity week at TJ actually helps TJ bond more as a community.”

On International Day, students celebrated not only their own culture, but also the traditions of their classmates. Thai students not part of an iNite act still donned their traditional attire, and Caucasian students wore borrowed saris to show support for their Indian friends. This mass-celebration of the many ethnicities at Jefferson allowed people to mesh together as one in honoring other customs and beliefs.

“Holding a diversity week will most likely make the student body a lot stronger because often, students don’t really acknowledge each other’s differences, but when they’re able to embrace the culture or the races of other people, then they’re able to bond better with other students,” Gupta said.

Because of the simplicity and effectiveness of diversity week in promoting equality among everyone, Gupta believes that there will be more similar weeks later on.

“Not only does the diversity week hold this community closer together… besides just a few Facebook announcements and just relaying some of the information to the people… this does not require that much funding and so it’s a really easy and fun way for people in the TJ community to bond [together].”

With this success, many students look forward to future events similar to diversity week, as the openness of others around them has shown that anyone is accepted regardless of their cultural background.

“I would love to see events similar to diversity week in the future,” Xia said. “It was super fun and a great way to spread awareness. I feel like it really showed how supportive everyone is of one another and it made me see that TJ is a very accepting community.”