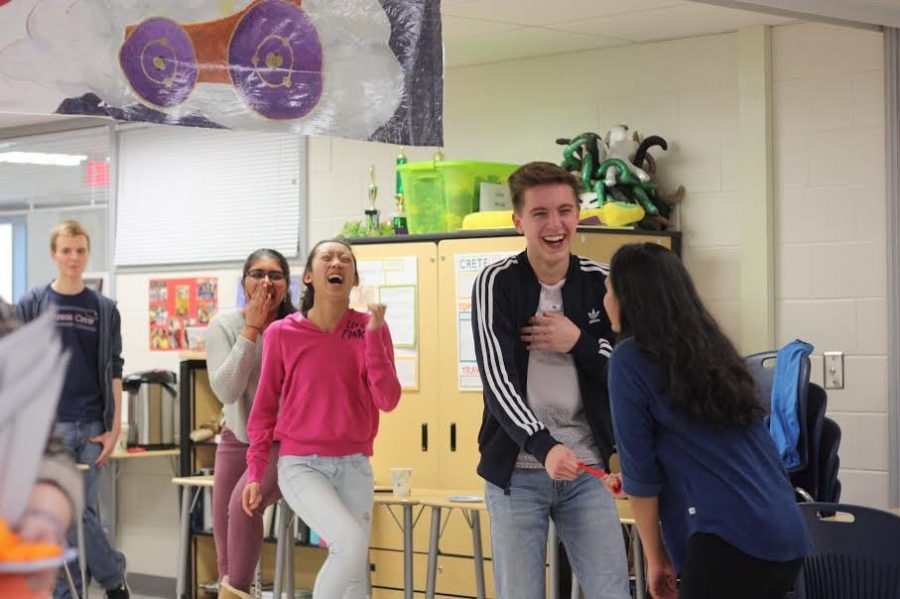 Lupercalia was celebrated on February 15th, during eighth period, by the Latin students and staff following Valentine’s day. However, the festival is far from the essence of Valentine’s day.

Lupercalia was originally celebrated to impose the blessing of health and fertility, in a slightly unconventional way, which was adapted to celebrate in school.

“We’re imitating an ancient Roman festival where they would go around and these young, unmarried men would hit young, unmarried women with bloody goatskins to represent conferring fertility. We turned that into a school appropriate game. The traditions were performed all throughout Ancient Rome so they used this time of year to represent fertility, farming season and health,” senior Rebecca Mays said.

Throughout eighth period, there was music and the laughter blaring from the two Latin classrooms, drowning the language hallway with festivity.

When asked about the commotion of the celebration, freshman Rayna Schoenberger, said, “We’re competing for food and once you’re out, you get food. But for the actual game, everybody gets a felt strip or you and someone else are holding onto the same felt strip and so those are the couples and the other people are the singletons. And so, the singleton has to tap someone in a couple and then they become a couple with the person they tapped. The other person is single and has to go to the fertility zone, spin around and go back in. The couples are running from the singletons and the singletons are running from the wolf which have a fluffy piece of fabric. The wolves try to tap single people and if you’re holding the wolf tail at the end of the song, then you’re out. It goes on until you have one couple.”

After eating snacks, students also had the opportunity to interact with students in various grade levels.

“There’s also just a lot of people from a bunch of different grades all participating which is pretty cool,” freshman Aria Moss said.

While the jubilee is not celebrated the same way as the ancient Romans celebrated it, Magistra Lister, one of the Latin teachers said, “I think we started this about ten years ago and students made it up at lunch. Then we played it that afternoon and it was such a big hit that we now play it every year. Students have a lot of fun getting to experience the interesting culture of the Romans.”

Lupercalia, although quite an unusual festival, is celebrated with great joy by Jefferson Latin students.