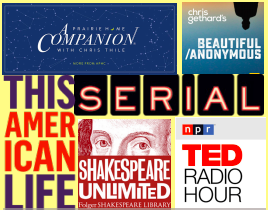 The colorful logos of podcast and radio shows beloved by the featured students in this article.

Note: an abridged version of this article is published in the February 2017 issue of tjTODAY.

All over America, the term “NPR babies” describes kids whose parents first expose them to public radio and who then grow up to listen to it on their own. Senior Nora Thompson is one of those people. Beyond listening to radio, though, she has explored her favorite topics, from criminal prosecution to comedy, with podcasts, multimedia files that are typically available for free through Internet platforms like the iTunes podcast app and Soundcloud.

“I grew up listening to NPR with my family,” she said. “We would always listen to stuff like ‘Wait Wait Don’t Tell Me’ on the weekends. I still listen to NPR more than any other type of radio, but I really like the podcasts because I can tailor what I’m listening to to my specific interests as opposed to just having that grab-bag story.”

According to another avid podcast listener, senior Raquel Sequeira, one of the best aspects about podcasts are the way that they can end up drawing your interest to a completely unexpected topic in the middle of your everyday commute.

“The great thing about radio as opposed to TV or movies is that, for one thing, you can listen to it while driving,” senior Raquel Sequeira said. “Most of the time it’s something so unique you wouldn’t have thought of exploring before. It turns in to something that grabs your attention. You could be talking about bricklaying and [NPR turns] it into a personal story.”

The long drives that most Jefferson students endure every day often leads them to find alternative entertainment. After she got her license, senior Bailey Knight discovered podcasts because she was spending hours in the car commuting to school and back and forth from the river where she practices with the crew team.

“When I could no longer do homework and I was alone in the car, I was running out of data to stream Spotify,” Knight said. “I was like, ‘okay, I need to do something here.’ So I downloaded a few podcasts and sampled them.”

With a little push from a family member, Thompson started listening to podcasts more and more for the same reason.

“My sister sort of got me into the first podcast I liked, but I really liked it as something to listen to while I was driving because there isn’t a lot of music that I’m really into,” she said. “On long drives, I really like having something just to keep my mind off the fact that I’m driving.”

Once these students discovered podcasts, they continued to listen because they found shows that explored their interests.

“I literally wrote my Common App about listening to podcasts. What I wrote about it in that essay was an episode of RadioLab,” Knight said. “I’m really interested in global health and HIV in particular, and it traced HIV back to its origins, talking about the idea of a patient zero and how it spread from chimpanzees. That was a really interesting episode for me.”

Knight has found ways to incorporate knowledge she has picked up from public radio into her education.

“Mr. Culbertson was talking about the Anthropocene and I’d listened to a podcast on the “Ted Radio Hour” the weekend before about the exact same thing, so [podcasts] definitely informs a lot of my discussions.”

Senior Raquel Sequeira has explored educational material in a unique way: she spent her summer exploring Shakespeare at the Folger Library. Now, she stays updated on the real-world applications of 16th century literature with “Shakespeare Unlimited,” produced by the Folger.

“They have researchers who talk about, ‘Oh, here’s how medicine in Shakespeare’s time connects to his plays,’ or, ‘Here’s how the food tells us about society,’ or, ‘here’s how he used music.’ If you said the words to a Taylor Swift in your play, that would be like what he was doing.”

Sequeira’s love of bluegrass music drew her to another long-running public radio show, Prairie Home Companion, which Garrison Keiler hosted from 1976 to 2016. The show featured guest musicians and humor as Keiler told the story of an imaginary small town called Lake Wobegone, Minnesota.

“I love [Chris Thile, the new host of Prairie Home Companion] as an artist. She was kind of weirded out because she was like, ‘I grew up with Garrison Keiler.’ Her family’s from Minnesota.”

“I’m so interested in connecting science and humanities. I kind of rant to [my dad] about it. He understands my excitement, especially [with podcasts] that [connect] medicine with Shakespeare. I love when I find that.”

Though Jefferson students can often seem oriented towards the “Science and Technology” part of TJHSST in the extreme, Sequeira has found students whose curiosities lead them to intellectual explorations in other subjects.

“People don’t realize how many humanities people there are at TJ. They may be brilliant at physics at math and they may do all this research, but when you put them in an English classroom, they’re super passionate. That’s actually one of the reasons that I stayed at TJ and loved it.”

Sequeira’s friend Sarah Dickson, who aspires to be an astrophysicist, is one of those people.

“We were driving somewhere together, like I was following her, and I turned on NPR and was listening to ‘Wait Wait, Don’t Tell Me.’ ”

When they got out of their cars, Sequeira mentioned something funny she had heard on the radio during the trip and they both realized that they had been simultaneously listening to that same show.

“Only at TJ,” Sequeira said.

Thompson has found herself connecting with others in unexpected ways because of podcasts like “Serial,” in which the host investigates a crime episode-by-episode. The first season, linked here, features a football player who was suspected of murdering his girlfriend.

“It happened in Baltimore which is my where my sister lived, so when she was driving around when she showed me this podcast,” Thompson said. “She got to show me, ‘This is the actual high school that he went to, this is the park that they’re talking about, where they found her body.’ Those things made it really tangible and fascinating.”

Another one of Thompson’s favorites is “Beautiful Stories from Anonymous People,” in which callers openly discuss issues like mental illness and domestic violence.

“The host is really open about his own life and his own struggle with mental illness,” Thompson said. “He shows people that no little detail in your life makes anything wrong with you and you can still be successful like he is.”

“After that he fell in love with the podcast and I thought it was really sweet that on the way back from NYC, I wanted to sleep but he wanted to listen to [Gethard’s] podcasts.”

The episode that got Valdetaro hooked:

In addition to connecting us to those close to us, podcasts can give us empathy and understanding for people and occurrences far away from our daily lives.

“One of my favorite episodes [of “Beautiful/ Anonymous”] was a guy calling in who’s a small town cop, talking about his perspective on how people see the police in America,” Thompson. “It put a human face behind everything we hear about people in the news.”

Knight heard the personal side of national news during from one episode of her favorite podcast in which the hosts conversed with a doctor who performs abortions at Planned Parenthood.

“We hear language like Donald Trump–I don’t know the exact quote–but where he says, like, ‘rip it out of the womb,’ and things like that and that makes [abortion] sound really terrible,” Knight said. “It’s setting the fats straight like how you go about that process and talking about the access [to abortion facilities]. If nothing else, it made me more aware of what the options are and how clinics like that function.”

According to Knight, this podcast, which labels itself the “Anti Slut-Shaming Podcast” and discusses everything from romance to women’s issues to abortion, has changed her perspectives and her actions.

“It’s really empowering and it’s definitely changed the way that I approach a lot of my life, just in terms of dealing with guys and taking control of my own decisions and things like that.”

And best of all, podcasts inspire even more creation and exploration.

“I love audiobooks, I love reading, I love talking about things,” Sequeira said. “I could totally see myself as the person to start a spinoff of Prairie Home Companion or my own Shakespeare podcast.”