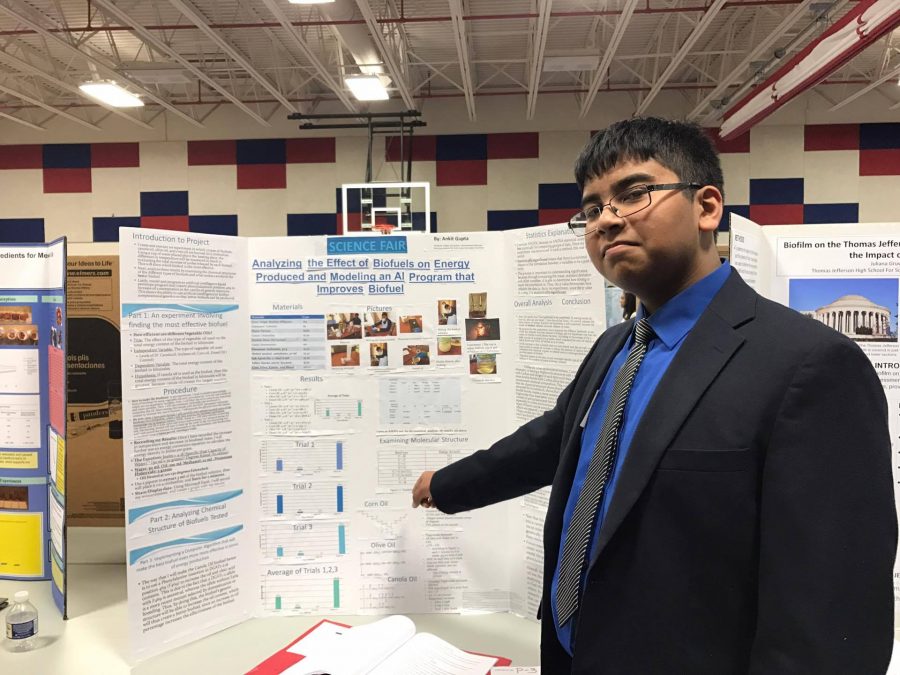 Ankit Gupta proudly stands next to his science fair project while explaining his experiment to students nearby.

Crowds of students milled around the rows of tables set up with trifolds and science fair projects, as the participants stood attentively nearby, ready to answer any questions asked about their work.

Many of Jefferson’s students participated in the science fair held on Wed., Feb. 1, in the recently opened Gym 2 of the school building. The majority of which were seniors whose research labs required them attend. However, a number of underclassmen were also present, motivated by their passion in various scientific fields and current issues they saw in the world today.

“What made me want to participate in this science fair is more so based off the fact that I have a passion for biotechnology and that’s something I actually want to go into in the future,” freshman Ankit Gupta said. “So I wanted to create a project that had to do with this topic.”

In addition, some students, such as sophomore Riya Dabbi, had personal reasons for choosing to conduct an experiment and study their specific field of science for the fair.

“My grandmother died of dementia, which is along the lines of Alzheimer’s, what my project is focused on,” she said. “Also, I’ve always been interested in the topic of neuroscience ever since I was younger so just doing a project on this was kind of interesting.”

After months of hard work and effort put into conducting experiments and putting together their projects, participants were excited to finally present their research to others in the Jefferson community.

“It’s exhilarating to be here. Being able to share research with people is really fun, and even though our results weren’t as we hoped it to turn out, it’s still really nice to show people that there are alternative methods to treatments [for Alzheimer’s] people have today,” Dabbi said.

In order to pick the most exemplary projects that move on to the regional science fair, judges came around to look at and evaluate the participants’ projects throughout the evening.

“The judges all are experts in their field, so I will be meeting with an actual environmental engineering scientist who can really give me pointers and tell me ways in which my project wasn’t valid and ways in which it was,” freshman Turner Bumbary said. “I really hope that by being able to meet with these judges, I can improve my projects for next year and hopefully move on to regionals and have a bigger impact.”

From their experience in being a part of the science fair, many participants agree that it is a valuable experience for those passionate in their topic and willing to put forth large amounts of effort and dedication.

“I’d say that the main thing I would say is, if you want to actually present in the science fair, don’t do it because you want to put it on your resume or something like that,” freshman Ankit Gupta said. “Do it because you need to do something that is your passion and so it’s really important to focus on your passion and to do your best because going into this science fair, especially the TJ Science Fair, is not something that can be taken very lightly. It does take many hours of concentration, practice and hard work to actually be able to execute an experiment but overall it’s a really rewarding experience.”