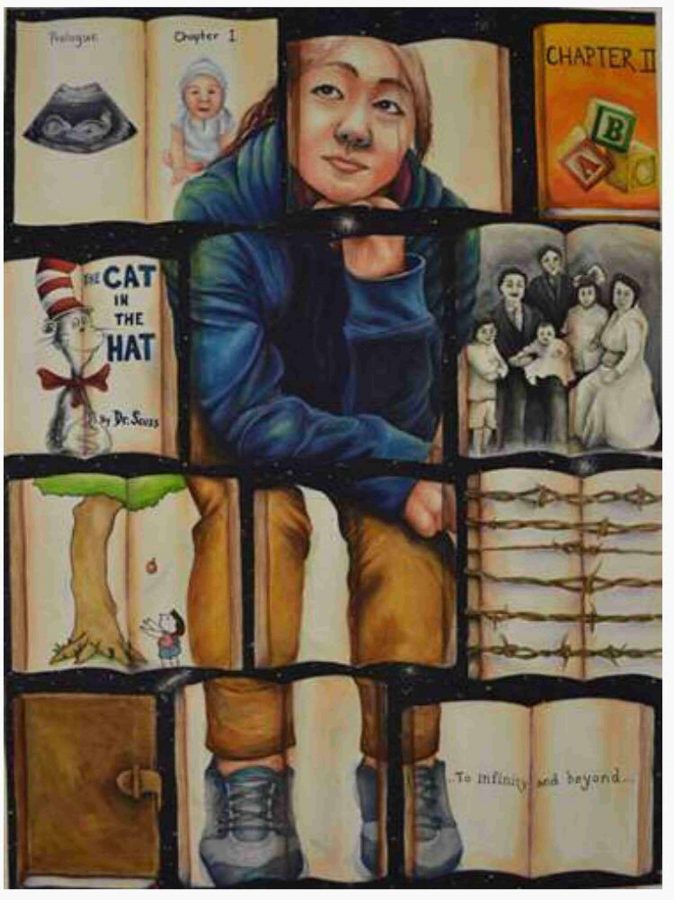 Sophomore Rachel Eom earns the gold key at Regional Scholastic Art competition with her piece based on literature and its impact on people.

The gold key is the highest level of recognition at the regional stage, and works that receive it are considered for national stage awards.

“The Scholastic Art and Writing Awards are a first regional, then national competition for students K-12 presented by the Alliance for Young Artists & Writers,” sophomore Brenna Courtney said.

The event was more of a self-competition, as there is no cap on the number of gold key winners.

“The Scholastic Art and Writing Awards is a program in which teens submit their pieces in hopes of their talents and efforts to be recognized on an exceptional level,” sophomore Rachel Eom said. “Personally, I feel like this ‘event’ is more of a competition between myself; every year the standards are higher and stricter, and you have to challenge yourself more and be able to prove that you are able to express your maturity of ideas and art style.”

Participants had different influences guiding the foundation for their artworks. For Eom, it was her relationship with literature.

“I wanted to create something that involved my identity and the progression of my level in literature, in hopes that I am able to visualize the impact of literature in my life,” said Eom. “I wanted to show that all the stories I read, all those words and dialogue I absorbed, influenced me in some way, whether they taught me how to read, write, treat people in a certain way, and finally create a story of my own.”

After sparking the inspiration for their artworks, the contestants put in many hours of effort and commitment into their projects.

“I started the piece in November and finished around early January, the piece requiring a lot more thinking than doing. I probably stressed out over it way more than necessary like studying it from afar, but the stress was definitely worth it,” Courtney said.

The purpose of entering the competition for many of the gold key winners was not to earn recognition, but to inform others.

“My ultimate goal was to show that one’s identity is not a single story, but rather the embodiment of multiple stories that is able to interpret and influence what they have learned from these stories in a personal way,” Eom said.