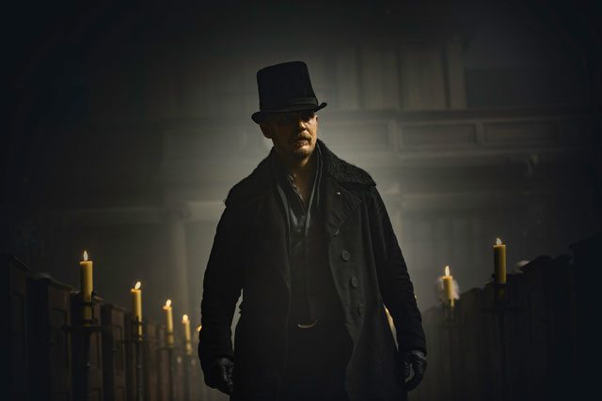 FX’s “Taboo,” an eight-episode British series airing on Tuesday nights, is a dark and brooding tale. Its first episode begins with floating dead bodies and grave robbers filmed in a dark appearance that reflects how life was lived in parts of England in 1814. To say that the living conditions look “no frills and rough” is an understatement. While watching the show, the audience may be tempted to scream, “turn on the lights.”

The star and co-creator of the series, Tom Hardy, plays James Keziah Delaney. Delaney arrives home after a long absence in Africa to gasps of, “I thought he was dead,” and strides into his father’s funeral like a gunslinger heading into a saloon for a fight. Delaney is there to claim his inheritance, a piece of land called the Nootka Sound, in Vancouver Island. This land is wanted by both England and America as it is valuable to the countries’ efforts in the War of 1812, and the powerful East India Company launches an all-out endeavor to procure the land from Delaney.

Delaney’s character is brooding, depressive, and mysterious. He experiences flashbacks of his experiences in Africa and the cruelties of the slave trade that he has witnessed. There also is something even more out of sorts about Delaney, which may be why the show is called “Taboo”- his unhealthy attachment to his now married half-sister, Zilpha Geary (Oana Chaplin). She is fragile and pale with a domineering husband.

This series might not be for those who prefer a lighter tone given the series’ occasional barbaric violence. After the first episode, there were no characters that were particularly likeable. However, the series is unique in its perspective of the time period and its complicated story line.  The brutish Delaney’s character is carrying so much baggage, both emotionally and psychologically, that the viewer gets drawn in to his disordered personality. This makes “Taboo” an interesting and historically complicated viewing experience.