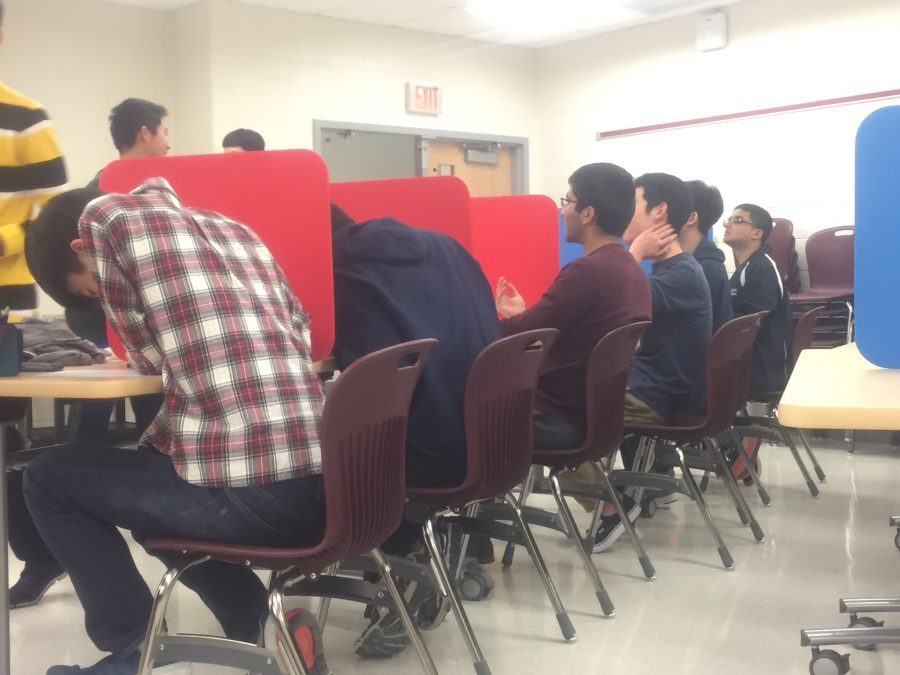 The F = ma exam is a U.S. Physics Olympiad qualifying examination, and at Jefferson, is hosted by the physics team. The activity ran both 8 A and B blocks on Jan. 18, and was only available to those who have registered.

The test consisted of only physics-related multiple choice questions.

“The test has 25 multiple choice question, which you will be given 75 minutes to complete,” freshman Patrick Hutecker said. “The questions are all classic mechanics and most introduce situations requiring you to find how an object is moving or some of its component.”

Many students felt that there were many benefits to taking the test and took it upon themselves to prepare for it.

“The best way to prepare for the test is taking AP physics and taking past f=ma exams,” Hutecker said. “Since I have not taken physics I prepared by taking all of the previous exams and seeing what questions I got wrong. Another way in which I prepared for preparation for another competition, Princeton University Physics Competition (PUPC).”

Freshmen taking the test also thought that they were at a disadvantage due to the lack of experience.

“Since I am a freshman I feel prepared as well as I could be.” Hutecker said. “While I don’t think I will pass the exam I think that I will be able to answer some questions and have at least some clue of what I’m doing. I don’t think many freshman take the test, and the few that do are usually not that serious about taking the test.”

However, Hutecker used the F = ma exam as an opportunity to gain knowledge of physics before taking the course in Junior year as well as future F = ma exams.

“I believe it to be a very good opportunity to prepare for taking the test in future years of when one might have more physics knowledge,” Hutecker said.

Other students took the test to improve their problem solving skills.

“I wanted to experience what it would be like and to see how many problems I could truly solve,” Wang said. “I didn’t feel too nervous, since I was just there to have some fun and see what the test was like. I learned new test taking strategies and different aspects of physics.”

Some students considered the test easier than they had expected.

“The test wasn’t as hard as I expected, because some problems were easily solvable,” freshman Richard Wang said, “And I did a lot better than I expected, but it was obviously not good enough to go through to the next round, but I didn’t mind since I wasn’t expecting to go through.”

There are several levels of testing after the F = ma exam such as the United States National Physics Olympiad (USAPhO), physics camp, and International Physics Olympiad (IPHO)
“USAPHO is the next step in physics Olympiad after F=ma. If you pass F=ma, which only like 4000 people, then you take it,” Hutecker said, “USAPHO is 3 hours and I believe 3 questions and extremely difficult. If you do well in USAPHO then you get invited to physics camp. Physics camp is probably the hardest thing to get into other than IPHO Only 20 people in the US get in. It is a 2-3 long week camp. On top of that if you do very well in physics camp then you can get chosen to compete in IPHO for the US.”