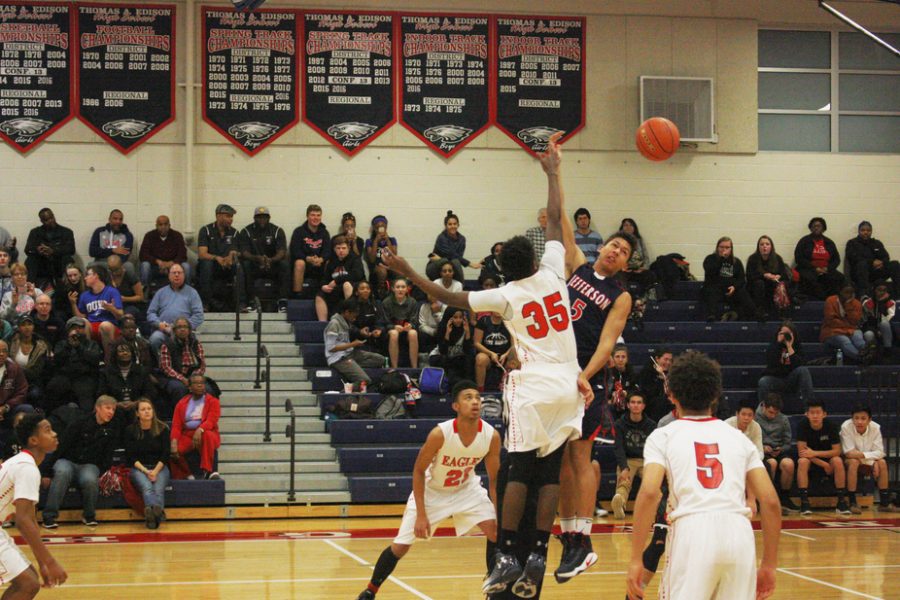 Junior Noah Barnes hits the ball back on the tip-off.

On Jan. 12, both of Jefferson’s Varsity basketball teams played against Thomas Edison High School in a double-header game. Despite sophomore Savannah Wilson shooting many three-point shots, the girls’ varsity team lost 39-52. The boys’ varsity team kept close with Edison throughout the game, but ultimately, an unfortunate bounce off the rim on a jump shot led to Jefferson losing 45-46.

Edison and Jefferson have played each other numerous times. As a result, there is a history of how games between the schools go.

“It’s usually a competitive game when we play them. I know a couple of kids on the team, so it’s a personal battle for me,” junior Noah Barnes, captain and guard of the Varsity team, said.

As a result of this history, the players knew what to expect on game day. But despite Jefferson’s knowledge of Edison’s style, they ultimately failed to pull off a comeback victory.

“I think we might have trouble keeping up with their tempo; they like to get after you, but I think we are able to handle pressure well,” Barnes said. “I think we’ll be able to counteract that with executing on offense and being smart on defense — not fouling a lot.”