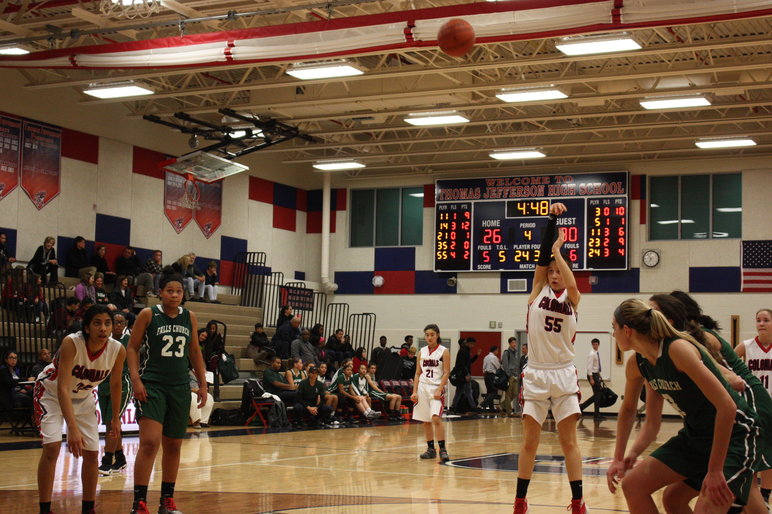 The Jefferson girls varsity basketball team won against Lee High School with a score of 58-38, and the junior varsity and freshmen teams saw similar results, with 27-24 and 19-12, respectively. This was the first sweep in over 5 years. The Jefferson varsity team expanded their teamwork and learned lessons from the game that will help them throughout the season.

After the game, players believed that they were prepared for the Lancers and outweighed them in talent.

“Talent wise we were better but on a sportsmanship stance we were pretty equal- sometimes they got frustrated and yelled at each other but that’s understandable,” freshman Abby Kim said.

The game also tilted in Jefferson’s favor as they had an unexpected advantage over the Lancers.

“The other team was good. They were athletic and strong. However, they didn’t really have any height compared to our team,” sophomore Mallory Brodnik said.

The Jefferson team has been in several close game situations where they have been unable to close out the game, they now believe that they have developed more as a team.

“TJ played really well. We hit a high percentage of our shots and we were working really well as a team. The bench was also really good at keeping our energy up. The biggest takeaway was that if we play with intensity and energy and we want it enough we can beat most teams,” Brodnik said.
The team was disappointed by a poor fan turnout, but they are ready for their next opponents as they plan to use the lessons that they have learned to their advantage.

“Girls basketball doesn’t really attract that many fans but we still played well,” Kim said. “So far this season we have been in a lot of close games and aren’t used to being up by such a large margin. But, we still did a good job of staying focused and continuing to play hard even when we were up. An added bonus was that the entire team got to play which is great and winning by such a big margin gave us confidence in ourselves because we had a lot of close games but only one other blow out”