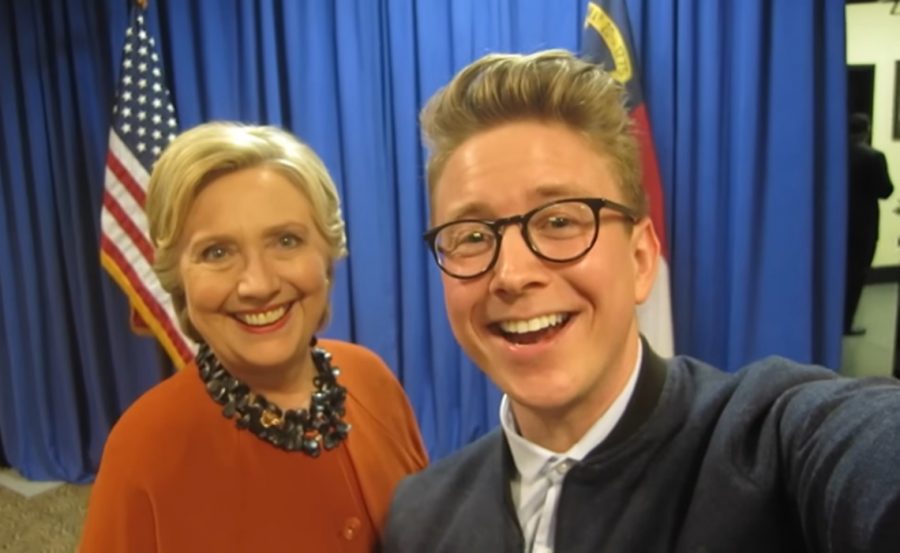 Tyler Oakley with Hillary Clinton the day before the 2016 presidential election.

2016 was a big year for everyone – the YouTube community is no exception. From political activists to never-before records being broken, many YouTubers took the online community by storm.
16) Daimaou Kosaka

In September of 2016, a video was uploaded onto YouTube that swept the YouTube community off it’s feet. “Pen-Pineapple-Apple-Pen” is a single by Pikotaro, a fictional singer-songwriter created and portrayed by Japanese comedian Daimaou Kosaka. “PPAP” sparked parodies, and has been called the new “Gangnam Style” by various newspapers and online media. The single also reached number 1 on the Billboard Japan Hot 100 chart and became the shortest single to chart on the Billboard Hot 100.
15) Marina Joyce

On July 22nd, 19-year-old English fashion and beauty vlogger Marina Joyce uploaded a video titled “Date Outfit Ideas.” In the video, Joyce was rumored to have whispered “help me,” which triggered an enormous online response. The most popular conclusion was that Joyce was being held hostage by ISIS and was making videos against her will. After many calls from concerned fans, the Enfield police department visited Joyce on July 27th and tweeted at 4:34 AM that she was safe. Marina herself also tweeted that she was “TOTALLY fine”.

Trollstation is a YouTube channel consisting of numerous British pranksters who perform pranks and social experiments. Some of their pranks have led to the arrest of some members of the group. In March 2016, Trollstation founder and cameraman “Digi Dan” was arrested and jailed for 9 months after being convicted of staging a bomb hoax and mock robberies in London for a video. In May 2016, four other members of Trollstation were jailed for between 16 and 20 weeks after staging a fake art heist which caused a stampede at the National Portrait Gallery. Five members of Trollstation burst into the central London art gallery just a week after the Tunisian beach massacre, and the gallery’s visitors fled in apparent panic.

With more than three million subscribers, fitness guru Cassey Ho, or blogilates, is also the CEO of women’s fitness wear POPFLEX. POPFLEX sells a wide range of workout gear from bras with beautiful, intricate designs to shorts that perfectly fit every body type. In 2016, Ho released two clothing lines, Mermaid and Dark Bloom. “The quality of our workout wear is on par with top yoga brands…but the price tag is cut in half.” the POPFLEX website said.

The alter ego of sensational fictional character Miranda Sings, Colleen Ballinger, uploaded a video titled “Life Update.” on September 30. In the video, Ballinger announced her divorce with her husband of one year, Joshua David Evans. The exact reason or cause to the divorce is unclear, but Ballinger pointed out that she initiated the divorce because the relationship wasn’t working out and they “were constantly butting heads.” The news shattered the YouTube community, as Ballinger and Evans were one of the most well-known couples on YouTube.

22-year-old Eugenia Cooney is known on YouTube for her strikingly thin figure. However, for five years, no one has ever spoken up about Eugenia’s small frame. Finally, in October, YouTuber Gregory Jackson, or Onision, uploaded a video flagging his concern for her health. Jackson frequently uploads videos about body positivity and especially Eugenia Cooney, but it wasn’t until October when he uploaded multiple videos in a row stressing the critical condition of Cooney and how young girls were triggered by Cooney’s size. The views amassed brought Cooney to the attention of many, and with Jackson’s encouragement, Cooney’s videos were filled with dislikes and mean comments telling her to “just eat.” Soon after, in addition to being featured in numerous news article, Cooney was invited onto “The Doctors” to discuss her weight, but she declined. A petition was created to ban Cooney off YouTube to prevent girls from being hurt by her. She has not yet addressed the reason for her size, except for one video that received criticism for being her just “babbling, not explaining.”

In November, YouTube megastar Connor Franta took the next big step in transforming his Common Culture brand into an empire. The 24-year-old announced a partnership with multinational retailer Urban Outfitters to distribute exclusive pieces from the clothing collection. In addition to growing his brand, the venture is also aimed at charity: all proceeds will benefit GLSEN, a nonprofit aimed at fostering safe school systems.

Vlogger by day, music artist by night. South-African born American YouTuber Troye Sivan is not only a vlogger with four million subscribers, he’s also a model, singer and an actor. Sivan has four singles as the lead artist as well as four extended plays. Ever since his debut EP “TRXYE” blew up, topping the iTunes album chart in 66 countries around the world and landing at # 5 on the Billboard 200, Sivan has been unavoidable in the music community. So, in fall of 2016, Sivan embarked on his second tour titled “Suburbia Tour.” His latest music video uploaded is titled “WILD,” featuring the popular “Here” singer Alessia Cara.

danisnotonfire and AmazingPhil, or Dan Howell and Phil Lester, a hilarious British duo who have a total subscriber count of over 10 million, went on their US tour called “The Amazing Tour is Not On Fire” spring of 2016. To commemorate the memories, the two published a photo book titled “Dan and Phil Go Outside” which was released on November 3rd. TATINOF is available on YouTube for the paid subscription of YouTube Red.

In 2016, comedian and vlogger Lilly Singh, or iiSuperwomanii, released a red lipstick named “Bawse” and released her first YouTube Red film, titled “A Trip to Unicorn Island.” Singh also appeared on the The Tonight Show Starring Jimmy Fallon on January 2016. In March 2017, she will also release her first book, How to be a Bawse. Singh reached 10 million YouTube subscribers in October 2016, making her one of the most successful YouTubers of all time.

What was once just a high school student is now also a glamor model for COVERGIRL and an internet celebrity. He started out as the face of “So Lashy!”, the brand’s latest mascara launch, and he’s also used in ads and commercials. So far, he has been featured in the Ellen show and has garnered an unbelievable amount of attention. Charles has more than 1 million followers on instagram and half a million subscribers on his YouTube channel, where he uploads regularly and does collabs with YouTube stars.

Being fed up with the recent fighting between YouTubers, Ryan Higa (or nigahiga) uploaded a video explaining his frustration with online creators on June 3rd, suggesting that instead, they make fun of themselves, participating in his #RoastYourselfChallenege. Higa was the first to roast himself, and what followed was a huge online trend between YouTubers.

In 2016, English comedian James Corden took the internet by storm with his popular “Carpool Karaoke” series. From Sia and Nick Jonas to Michelle Obama and Mariah Carey, many popular stars have made an appearance on “Carpool Karaoke.” But with almost 150 million views, and as nearly the most viewed YouTube video of 2016, “Carpool Karaoke” with Adele was by far the most popular.

Not only is Tyler Oakley a YouTuber, he’s also an activist. Much of Oakley’s activism had been dedicated to LGBT youth, LGBT rights, as well as social issues including healthcare, education, and the prevention of suicide among LGBT youth. In 2016, Oakley has filmed videos with several enterprising and inspirational people such as Hillary Clinton, Michelle Obama, and Ellen in order to continue entertaining, motivating, and informing his fans of topics he believes are important.

The three tiers of achievement for creators on YouTube are well known – the Silver, Gold and Diamond play button, for 100 thousand, 1 million, and 10 million subscribers, respectively. However, in December 2016, Felix Kjellberg, or PewDiePie, made news again when a personally delivered Ruby Play Button arrived at his house from New York to Brighton, United Kingdom. The ruby button itself, which was crafted into the shape of a Brofist, came wrapped in layers of bubble wrap and sevem little Brofist’s that Kjellberg wants to send to seven of his “longest lasting subscribers, that are still active.”