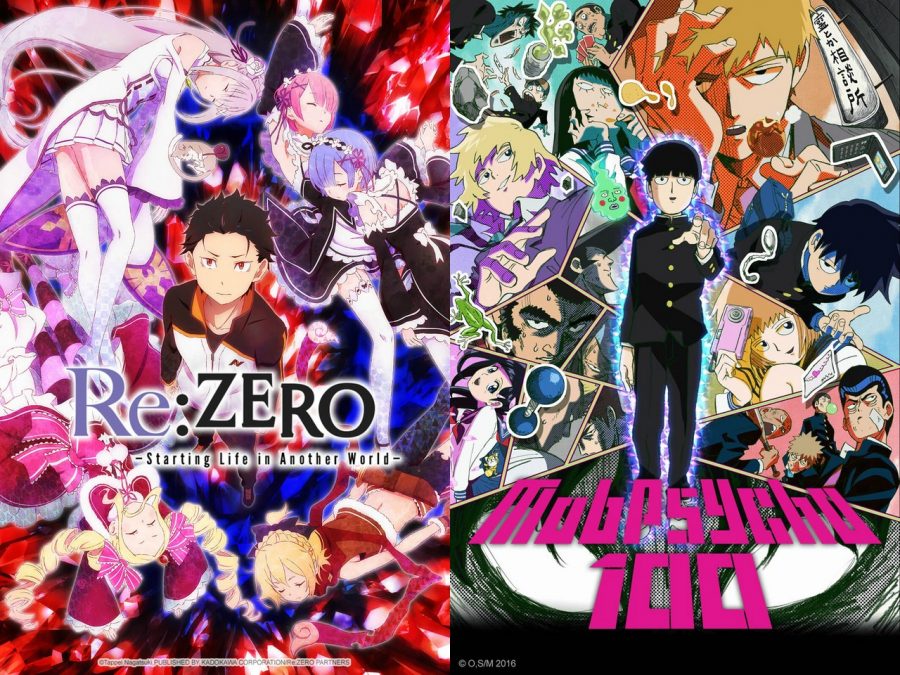 1) Re:Zero -Starting Life in Another World-

Despite giving off a strong vibe of a generic “trapped in an alternate world” anime, while some of its competitors remained firmly mired in that range, Re:Zero just gradually started getting better, episode after episode. It takes the dying concept of a NEET who is transported to another world and turned it on its head by making the protagonist Subaru utterly fallible, in the process practically attacking its own genre and the fans who eat it up. Stepping into that largely untread ground, the series produced numerous outstanding, envelope-pushing episodes as well as laying out plenty of dramatic battles, intense character development, and entertaining twists.
2) Mob Psycho 100

Despite his extraordinary powers, the titular character Mob suffers from the same self-doubt and drive for self improvement that afflict all of us. His story is so human that it’s hard not to care – or even cringe – at how close to home it hits. As Mob faces up against more and more powerful enemies, the suspense doesn’t come from whether or not he’ll win. It comes from whether or not he’ll find some self-confidence in his victory. A lot of shows have a great story and a lot of shows have a unique style, but Mob Psycho 100 is a rare exception that tells a story that’s as vibrant and engaging as its art and animation style.
3) Handa-kun

While there were two prominent “coolest kid in school” comedies this year, Handa-kun stood out because where Sakamoto seemed all-knowing, as if he never did anything by accident, Handa is completely clueless and just happens to win his classmates’ hearts through coincidence and misunderstanding. His extreme social anxiety and belief that he is actively hated by the kids who worship the ground he walks on set the stage for a variety of hilarious misunderstandings and the immense disconnect between Handa’s outlook and that of the student body is a clever running gag that seldom wears thin. Rarely does a spinoff come along that’s able to stand on its own so adeptly.
4) My Hero Academia

Beautiful animation, powerful worldbuilding and one adorable main character make My Hero Academia a must-watch. In a world where heroes are commonplace and regular people are scarce; Midoriya lacks the “quirk” he requires to stand out, but he already has everything it takes to be heroic. Deku is so thoughtful and brave that he quickly wins over even the most powerful hero, All Might, who turns out to have a secret weakness. From there, the story gives way to a host of interesting, flawed, and ultimately likeable characters who strut their stuff in intense action scenes that make this world feel so engaging and real. From the opening power ballad to the final episode, I was captivated all the while.
5) Yuri!!! on Ice

Do you really need to hear one more person raving about Yuri!!! on Ice? I’ll make this short: the reason I’m placing it near the top of the heap is simple: it’s a fun show to watch. Bursting at the seams with creative passion, it feels like someone enjoyed putting it together. That abundance of energy makes it easy to get wrapped up in the story, so much so that there were several occasions where I felt genuinely annoyed by the prospect of having to wait a week for the next episode. Any series that can inspire that kind of eagerness in its audience has to be doing something right.
6) Tanaka-kun is Always Listless

Tanaka-kun is Always Listless started off every bit as sleepy as its main character. Luckily, it quickly picked up as it spread beyond the premise, and to a wider cast of fun characters. Tanaka’s unusual levels of slackerdom attracts admirers and friends, from the hyper Miyano to the conflicted popular Shiraishi. Each episode focused on a different set of this colorful cast, and their relationships with Tanaka and his trusty best friend, Ohta. Though it does rely a little too much on the confines of its genre, there’s so much to love here. Tanaka-kun was consistently hilarious, and made you really feel for its various characters.
7) Haikyu!! 3rd Season

When I first heard that this 10 episode season was just going to cover one match, I thought it was going to be painfully padded out. There’s no way that ten straight episodes of the same characters in the same gym wouldn’t get tiresome, right? I could not have been more wrong. This season outdid not only its past seasons, but practically every other shonen sports anime in one outstanding regard: perfect tension. Most sports anime rely on frequent cutaways and spectators’ commentary to break up major plays in the show’s matches, but this immaculately animated volleyball game that really felt like watching a legendary sports match play out in real time. As pure edge-of-your-seat entertainment, Haikyu!! season 3 rose to the top of the heap in a season already stuffed with quality.
8) Flying Witch

It feels odd to describe such a laid-back series as compelling, but its ability to balance slice of life stories with the supernatural had my attention from the first episode and persuaded me to come back for more each week. That seemingly effortless blend of normal and bizarre works in part because of the way in which the show presents its more creative ideas. Visits from spirits are depicted with the same amount of fanfare as encounters with regular townspeople, and it’s that willingness to see magic in ordinary things that makes the extraordinary feel natural. Flying Witch is quietly clever, creative, and always pleasant to watch.
9) HaruChika

HaruChika might not be one of the high-paced thrillers typical to the mystery genre, but the small, sedate mysteries that are the focus of each episode make each case personally important with the characters and naturally pulls the audience in as they get close and closer to the characters. Speaking of the characters, this show gives us fun and simple archetypes that still feel believable, bringing me to one of my favorite parts about this show: it depicts a refreshingly non-stereotypical teenager with a same sex crush. It’s also refreshing to see a central relationship between a boy and a girl that shows no romantic tension in a genre rife with the implication that boys and girls can’t just be friends. While certainly not without missteps, HaruChika brings elements that made it one of the most interesting shows of the year.
10) Love Live! Sunshine!!

I wasn’t quite sure what to expect from the new generation of the Love Live! franchise. At worst, I feared it’d be a botched attempt at pushing a successful property past its expiration date. At best, I hoped it’d bring a new and entertaining group of characters into the crowded field of idol anime. I certainly didn’t expect the new series to come right out and ponder the meaning of its own existence. As the girls of Aqours struggled to break out of the shadow of their predecessors, Love Live! Sunshine!! made a case for itself as a story that could draw inspiration from the original series without following blindly in its footsteps. Even if you take it out of the context of the franchise, Love Live! Sunshine!! is a well-made and enjoyable genre piece with likable characters and well written, enthusiastic scenes.
11) ERASED

Time travel shows have always fascinated me, especially when they’re focused on small windows of time or changing the lives of just a few people. Satoru’s Revival powers, the origins of which are never explained, pave the way for a fascinating story about children murdered during his childhood, a mystery rife with suspense, intrigue, and heart-wrenching human drama. While the true identity of the murderer isn’t quite as shocking as the producers likely intended and the ending feels rushed, the main characters are likeable and the tension is oftentimes tangible – and I loved the core message of reaching out to people who are suffering in silence.
12) Shōwa Genroku Rakugo Shinjū

From the first episode, it’s easy to tell SGRS is going to be a special show. Centered on a niche art form that was falling out of favor even during the show’s mid-century time period, it brings a fundamentally inaccessible performance style to life through vivid scene-setting, stunning performance set pieces, and rich characters. Strong writing and vocal performances helped to make its subject matter accessible, and its story posed meaningful questions about the struggle to keep an artistic tradition relevant in a changing society. It made me smile, it made me think, and it broke my heart in the best possible way.
13) Bungou Stray Dogs

When talking about Bungou Stray Dogs, there is one thing that people agree on: it’s not what they thought it would be. I am willing to admit that I may have enjoyed this show more than it deserved as it does struggle to integrate its comedic and dramatic moments together, often causing entire scenes to flop. But the fact that each character and their power is based on classic authors is quite original and makes for some interesting combat dynamics. Each character also has quite a distinct personality, and while they might come off as a tad one-dimensional, it’s still fun to see them interact with each other. Bungo Stray Dogs will probably be more interesting if you know the authors in question, but I wouldn’t write off the possibility that it can still be fun even if you’re in the dark; besides, that’s why we have Wikipedia.
14) Kiznaiver

Kiznaiver is the kind of show where the flaws just make it that much more endearing. It works less as an honest analysis of people and empathy and more as fantasies cooked up by and for people who come up short in their earnest attempts to connect with others. So many of the conversations within the show are scarily familiar to me. Either they feel like they were lifted directly from things my friends and I have said, or from the rhetorical fantasies we might find ourselves stirring up in our heads from time to time.
15) Assassination Classroom

What impresses me most about Assassination Classroom is how it’s gradually improved over time. While the first season’s attempts at emotionally compelling drama didn’t leave much of an impression, the second season found a way to really tug at heartstrings. More importantly, rather than using Koro Sensei – who started off as what made an episode work –  as a crutch, the series threw time and effort at developing the rest of the cast to a point where most of the major characters can stand on their own. The show’s ideas about the role and importance of a good mentor have also helped drive the storytelling forward this season, and Assassination Classroom became a rare action comedy that actually has something interesting to say. It’s always been an entertaining series, but it molded itself into a genuinely good one.
16) Food Wars! The Second Plate

While it’s true that it’s not as good as its first season, The Second Plate still managed to be ridiculously intense in the best shounen style. For a show about mere cooking, it raised the stakes with each successive battle, pitting hero Soma against foes with different specialties, skills, and personalities that all tested and expanded his own repertoire. It also avoided formulaic battles, which is relatively uncommon in tournament-style series, and the nature of the cook-offs made the old fight narration trope make more sense, since knowing exactly how someone was seasoning a cut of meat was integral to the outcome. I do wish that we’d gotten more character interactions, but given that there was never a week when I didn’t want to watch it, the second season of Food Wars! really did hold its own and rise to the top.