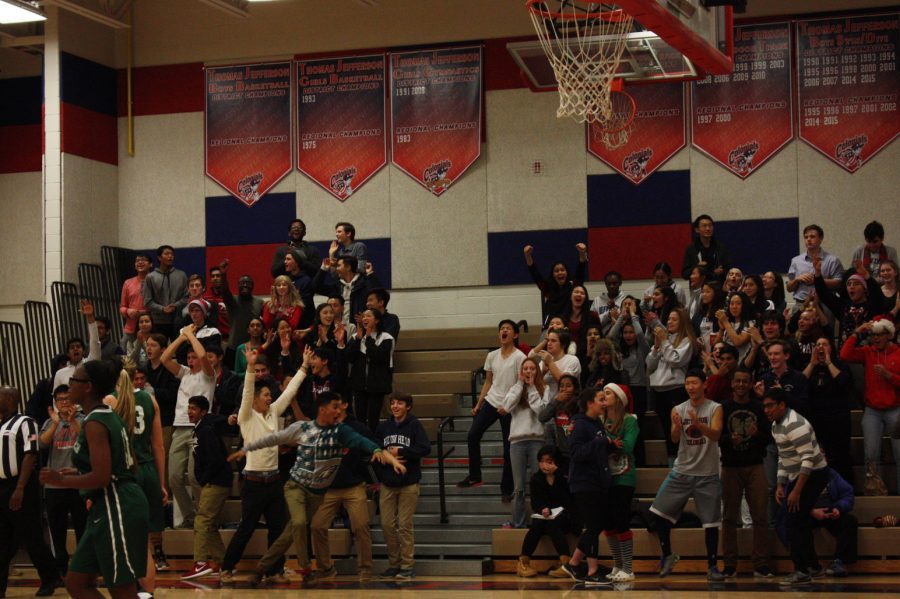 The Monticello Maniacs cheer on the Colonials.

As the Jefferson and Falls Church varsity men’s basketball teams warmed up on opposite sides of the gym, the audience sat in the bleachers and chattered with excitement – most of them were hyped as Winter Break had just begun. The “Monticello Maniacs,” Jefferson’s devoted fan squad with Santa hats and Christmas sweaters, had already began to cheer and chant all throughout warm-up and the game on Friday, December 16th.

During warm-up, the Colonials and Jaguars lined up to shoot free throws. One Jaguar jumped up, threw the ball, and missed.

“One!” the Monticello Maniacs shouted together.

“Two!” the Monticello Maniacs shouted again as the the Jaguar’s shot bounced off of the rim again. Every time a Jaguar would miss the shot, the Maniacs would count a number up.

“The Jefferson audience is really loud,” sophomore audience member Caroline Jin said. “But they’re what make these games so hyped.”

The cheering tactics of the Monticello Maniacs also involved exploding in applause for each basket scored by the Colonials, singing winter holiday songs in spirit of Winter Break, and performing loud chants to distract the Jaguars during Falls Church’s penalty shot opportunities. But the Monticello Maniacs were not the only ones who performed. During half time, the Jefferson Dance Team, with matching white t-shirts, black leggings and plaid shirts tied at their waist, also performed a synchronized dance to a short song medley.

“This is only my second Jefferson basketball game, but it’s already easy for me to tell just how spirited we are.” Jin said.
The Colonials were slightly ahead for the first quarter, with Jefferson scoring a whopping five three-pointers. The Falls Church team stepped up during the second half, and they kept ahead all throughout the game and finally, won the night at 68-74.