A Day in DC : Newseum 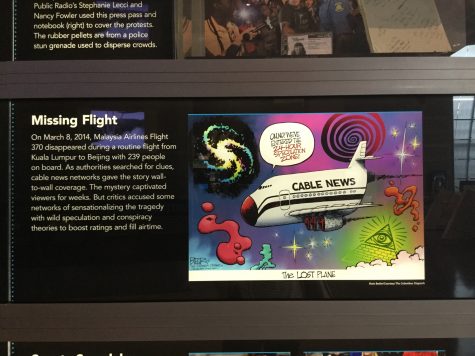 The National Museum of African American History and Culture (NMAAHC) opened on Sep. 24 following much anticipation and interest surrounding the museum’s construction. Immediately following its opening, I scrolled through the website’s online signup system, only to realize that the next available tickets were slotted for Dec. 19. After three months, I was finally able to visit the NMAAHC on Monday, Dec. 19, along with the Newseum, which I decided to add on after hearing much about the museum.

Because my timed tickets only allowed me to enter the NMAAHC at 11:30am, I decided to purchase a ticket to the Newseum and explore the Newseum for a few hours before walking a few blocks down to 14th Street. For those two hours, I decided to allot all my time on the Hubbard Broadcasting Concourse.

Of all the exhibits on the concourse, the horror and shock left by the FBI exhibit made it the exhibit of second-most impact on my throughout the entire experience. Gripping stories of foiled crimes, the history of America’s Most Wanted, and murderers disappearing without a trace left me exhilarated yet horrified, piqued yet disturbed. A visit to the Newseum requires a trip to the concourse to visit this exhibit.

After touring the NMAAHC for two hours, I decided to come back and tour the 2nd and 3rd levels. And that’s when I encountered the gem of the museum: the Nikon Pulitzer Gallery.
If it makes you laugh, if it makes you cry, if it rips out your heart, that’s a good picture.

Across the top of the doorway, if you look over your shoulder as you’re walking in, you’ll see this quote plastered across the wall: “If it makes you laugh, if it makes you cry, if it rips out your heart, that’s a good picture.” I cannot think of a greater quote to summarize the impact that this gallery had on me. Every picture was just as heart-wrenching, if not even more so, than the one before. These photos make you double back and look at history, prejudices, and yourself with a fresh new pair of eyes. If you’re looking for enlightenment, try flipping through a gallery of Pulitzer-winning photographs, and you will know exactly what I’m talking about.

I ran out of time after this exhibit since I spent so long carefully soaking in the enormity of every picture, but soon found out to my delight that the Newseum pass was valid for two days. So I came back at 9am on Tuesday to continue this journey.

With the whole day ahead of me, I took the glass elevator to the 6th floor and spent my time carefully reading up on the assassin of a Russian ambassador in Turkey, terrorism in a Christmas market in Berlin, and several states’ accounts of what went down in the electoral college the day before.

Next followed the CNN exhibit in the floor below, where I could view the profiles of Donald Trump’s confirmed and speculated nominations for cabinet, and live-follow Twitter data on Hillary Clinton and Trump including occurrences of emojis associated with each candidate (Trump’s was fire) and real-time positive, neutral, or negative mentions of each runner. The multimedia experience of the CNN election exhibit gave the exhibit a captivating and intriguing aura, and I’m glad that the Newseum was able to get such an display on exhibit.

Following a VR video on the 3rd floor, I completed my tour through the Newseum, and picked up my coat before leaving through the glass front doors of this shiny, modern museum.