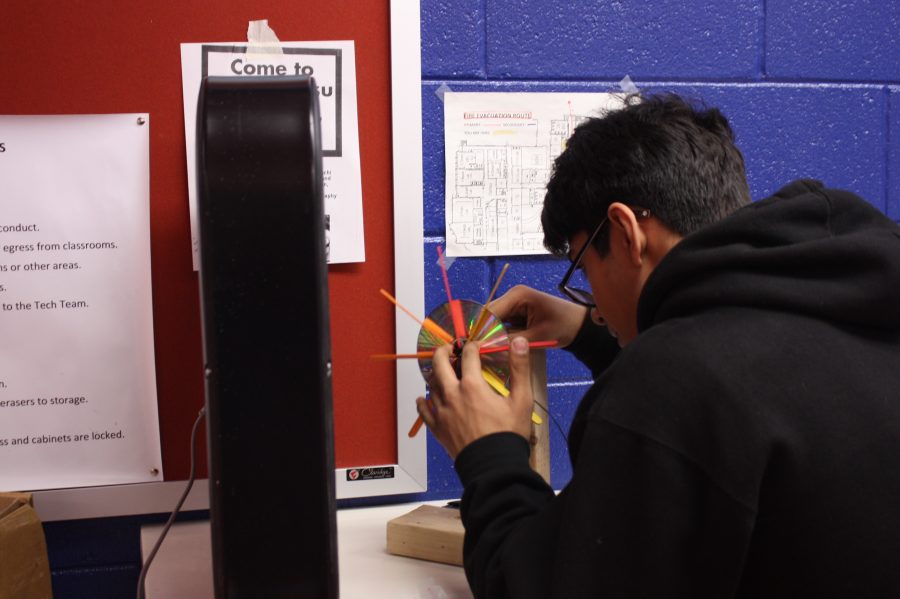 Science Olympiad team member Faaiz Memon perfects his Wind Turbine device in preparation for testing at the competition. By testing it now, he can modify and improve his design for future competitions.

In order to prepare for competitions against other schools next year, Thomas Jefferson Science Olympiad held an intramural tournament at Jefferson during 8th periods last week by getting everyone to practice their various events, whether testing or building. Jefferson Science Olympiad students tend to procrastinate, but this intramural competition prevents procrastination on their event preparations by effectively having the first tournament three weeks earlier.

Normally, Science Olympiad tournaments last an entire day, with many time slots for events to happen. However, since this tournament was conducted at school, an alternative scheduling method to conduct the competition was needed.

“What we’re doing is that during every 8th period block this week, we are running sessions. We divided each block into two sessions, for a total of eight sessions,” Science Olympiad captain John Krause-Steinrauf said. “Tests take about 25 minutes, which is about half a block. For some events like Forensics, we are giving them the full block, or 50 minutes to take the test.”

Preparation for events is one of the most critical features of winning a Science Olympiad competition. Jefferson got second in the state the last two years, and in order to get first, they will need to do more studying, building, and testing for their events.

“I think in general, a lot of people tend to procrastinate on getting started with events,” building leader Radhika Agrawal said. “Our tournament’s on January 7, which is right after Winter Break, so people leave it for that week between winter break and the tournament to do everything, so having this tournament now encourages them to start earlier.”

Having this time to prepare before actual competitions begin is very useful, as you can make and test an engineering event device. In engineering events, you usually make your device beforehand, which means that you can spend as much time as you want in making, testing, and perfecting the device. By having this competition before the first competition, it forces engineers to build and test their devices at least once before the actual competition.
“I think this event has has been definitely helpful, especially for Wind Power, my building event, because I have this mount that I wasn’t able to get at home, I don’t have a fan like this at home to test my rotor with,” team member Faaiz Memon said. “The assembly did not work well today, which definitely showed me I need to improve it. I talked to some of the leaders, and they helped me out, and they told about some of the things I could do to make this better, so overall it has definitely been really helpful.”