She’s the First’s bake sale sells out within minutes 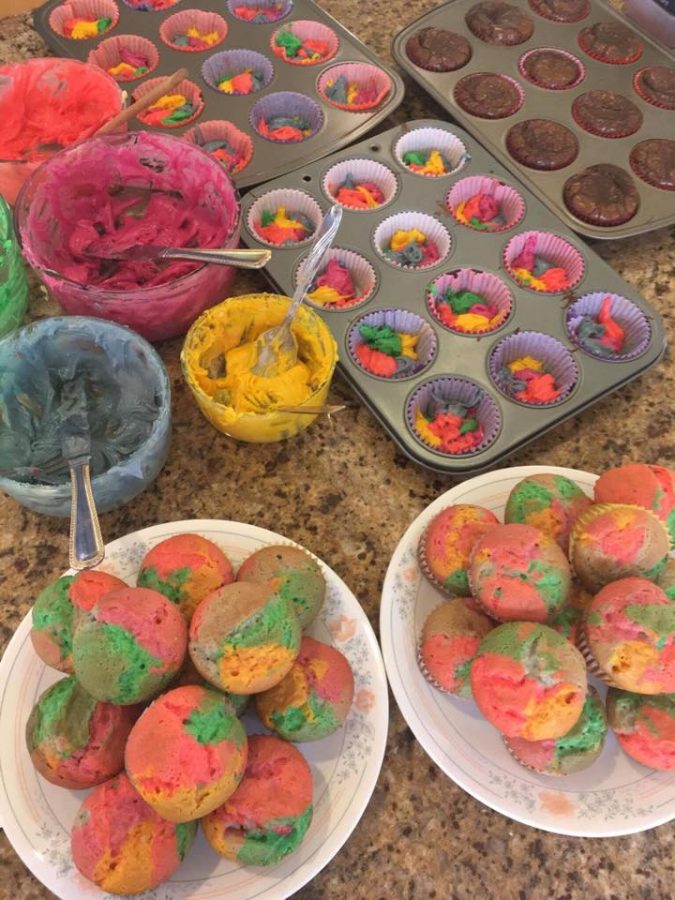 A variety of baked goods, such as rainbow cupcakes and brownies, were made and sold at the She’s the First bake sale. Photo courtesy of Aishani Pal.

Chatter filled the Auditorium Lobby as students holding dollar bills crowded around an array of colorful baked goods, vying for a chance to buy one of the confections before they sold out.

The recently-formed She’s the First club held their first bake sale on Nov. 30, with the goal to support the education of girls in underprivileged schools.

“She’s the First is a very well-known organization and we wanted to bring it to TJ because we realized that there is a community that’s interested in helping the underprivileged girls that are in other countries,” the club’s publicist, junior Aishani Pal, said.

The club members plan to donate the money made from the bake sale to a sister school that they will be paired with after becoming an official She’s the First community.

“Since She’s the First is a larger organization, our club is working on an application to submit the TJ community sheet first, so we’ll become an official She’s the First community,” Pal said. “We [will be] paired with a sister school, we’re going to be using the funds that we collect, giving them supplies and just helping them in any way we can.” Pal said.

Pal decided to participate in the She’s the First club because its cause resonated with her beliefs and past experiences.

“As a girl myself, we’ve already seen here that girls aren’t always able to get some of the opportunities in STEM, but something to think about is sure, we don’t get all of the opportunities here, but think about all the girls that are in underprivileged countries who already are in a state of oppression or financial problems, and on top of that, they’re girls.”

Students, such as freshman Jonathan Daniel, who heard about the club’s goal thought it was a good idea in promoting social equality and breaking gender stereotypes.

“It’s really good to be able to give money to these girls who don’t really have as many opportunities as more privileged schools,” Daniel said. “Also, for girls in general, it’s great to get more girls to pursue what they really want to do, instead of being forced into these stereotypes.”

As the club was started only a few weeks ago, the members turned to social media to raise awareness throughout the Jefferson community before the date of the bake sale.

Reflecting on the club’s first bake sale, the members were surprised to find that so many students were willing to support their cause.

“One thing we did not expect at all is to sell out so easily,” Pal said. “We sold out within 5 to 10 minutes through break, which is when the bake sale happened.”

Students at the bake sale had a variety of reasons for deciding to support the She’s the First cause.

“First of all, they had amazing cupcakes, and they were very aesthetically appealing,” freshman Rhoshini Raghuraman said. “But more importantly, I came just to play my part in the role of raising funds. It’s just some little difference I could make.”

With Jefferson being a school that provides many unique opportunities to its students, it is important to think about others who are less privileged.

“TJ, as we know, is a very academics-focused, education-based school,” Raghuraman said. “It’s very rigorous, and it has many programs that even colleges don’t offer, so I think that TJ, being the way it is, makes giving back and raising funds to help other kids very powerful and important to the community.”