Marching into the holidays 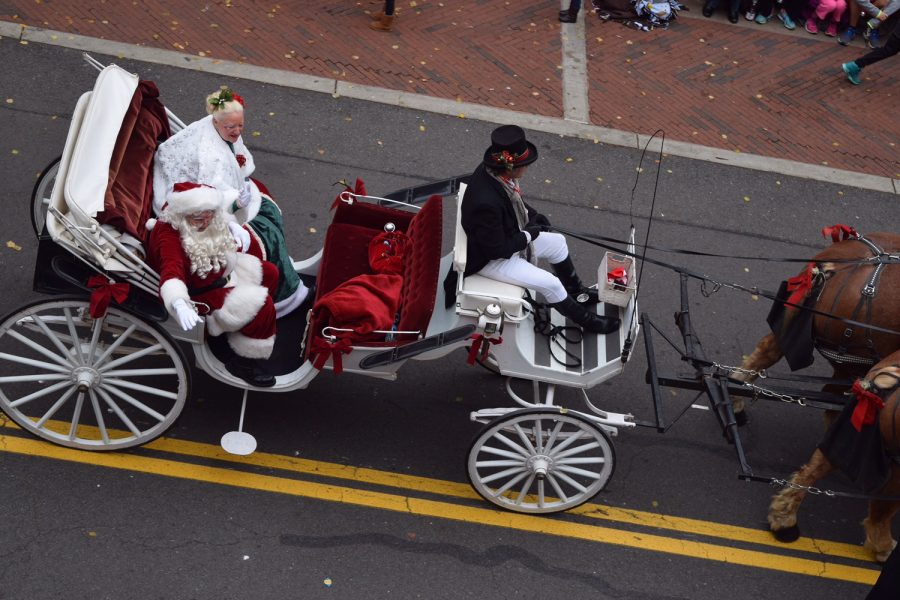 People dressed up as Santa Claus and Mrs. Claus at the Reston Parade with their sleigh and “reindeer” (horses).

As people lined up and tried to get a spot in the front of a normally known sidewalk, I saw floats, banners, and acts flow down the street of Reston holiday parade. Holiday parades are found everywhere from rural neighborhoods to big metropolitan cities. They are usually filled with floats of big elves, reindeer, snowmen, and other holiday themed characters. The Annual Reston Parade is one of these.

The Reston Parade is a common event for students to visit, with huge floats and acts from schools across the county. It is an all day event from the parade in the morning to the tree lightning at night time.

My family attends this parade every year, and I feel it is a great way to kick of the holiday season after Thanksgiving. So do many other families, apparently, because  if you come to the parade anymore than 15 minutes after it starts, there are no spots for a front row view.

At the end of the Reston parade every year Santa Claus and Mrs. Claus, come out at a big showing with their reindeer, as they parade through the streets and Santa shouts “Ho ho ho” giving you that warm holiday spirit. He waves in his sleigh to the children while his elves dance around him, making him the grand finale.

This feeling of the holidays decompresses me. It reminds me that winter break is to come with the joy of holiday engagements such as Secret Santa and TJ Caroling. Going to holiday engagements such as these parades also  just helps make me feel like a kid again, and remember how I felt when I was younger. They also help me pass on the tradition of Santa Claus to a younger sibling.

Holiday parades are a way to bring the family together  to celebrate a great holiday, whether it be Thanksgiving, Christmas, Hanukkah, Kwanza, or any other celebratory holiday. Honestly, who does not like to see a jolly old man in a red suit wishing you a great Christmas holiday?