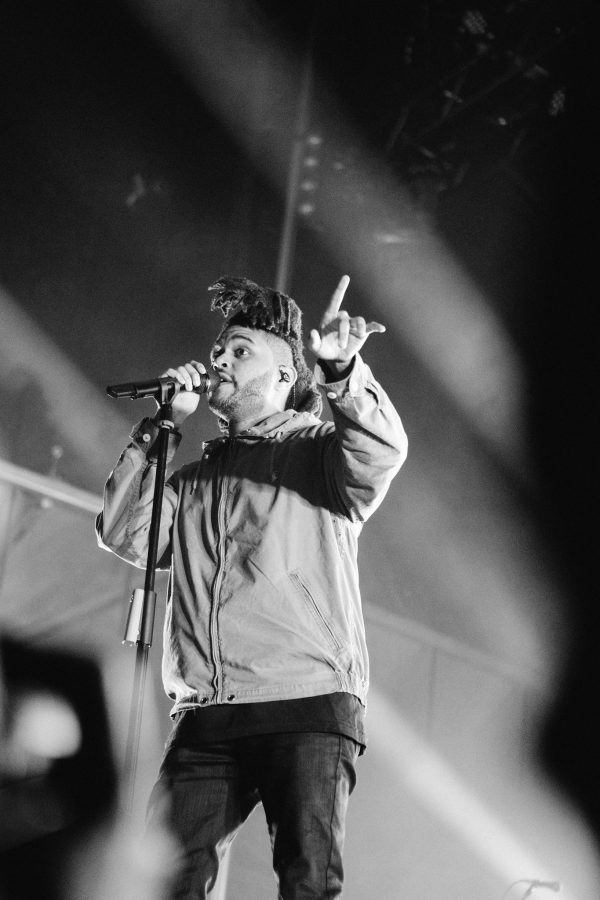 The Weeknd's look in 2015, drastically different from his recent style.

Four promo singles, two insane music videos, a short film, multiple merchandise pop-up shops, a new haircut, a completely clean slate on Instagram, and not to mention a breakup with longtime girlfriend, Bella Hadid, all leading up to this moment. This past Friday The Weeknd released his fourth album, “Starboy”. The term is Jamaican slang for a man that enjoys the company of multiple women at the same time. The album consists of 18 songs and five featured artists.

Just from looking at the cover art, it is apparent that this is a new The Weeknd. He’s cut his iconic hair for a shorter and cleaner cut. You can tell The Weeknd’s diverged from his R&B roots a bit for a darker sound on the album’s namesake “Starboy” and the second track “Party Monster”, which has trap music influences, although The Weeknd still needs to work on his rhyming. “Starboy,” the song,  features Daft Punk and a unique percussion; it seems The Weeknd does not only still love money, women and substance, but he now has a love for luxury cars, referencing multiple models throughout the song. “Party Monster” is a catchy, Lana Del Rey featured track that I can see catching fire in the hip hop community.

Another different feature this album has from his past albums is a lot of voice alteration. From the chipmunk sound used by Frank Ocean in “Blonde” to heavy use of auto-tune (which he doesn’t need at all), this album utilizes many effects, though not to best use at times. After “False Alarm”, a monstrosity of a song with a deafening beat drop, the album continues the darker theme with “Reminder”, a song fans of trap music will like, with memorable wordplay and use of ad-libs. He says “all these R&B ****** are lame,” which is interesting, since The Weeknd specializes in Contemporary R&B. ”Starboy” then takes an interesting disco-sounding twist with “Rockin” and “Secrets”. These honestly were forgettable songs and detracted from the album, though I appreciate the experimentation.

Now comes the really good part, some of my top picks from the album. “True Colors,” my favorite song on the album, goes back to some of the sounds of “Beauty Behind the Madness”, an album that bagged The Weeknd two Grammy awards. The soulful beat, background vocals, catchy hook and clean sounds just makes the song a classic to me. “Stargirl Interlude” is a minimalistic song that shows off Lana Del Rey’s impressive vocal range, and would’ve been been better if it was a full song instead of an interlude.

This next track had the potential to be my favorite song on this album. “Sidewalks” is an interesting song that features the fan favorite Kendrick Lamar and a mesmerizing Daniel Wilson Post-Hook (no, it’s not Sam Smith), and disses The Weeknd’s old producer. The beat is smooth and takes inspiration from blues and jazz, Kendrick’s verse was great and Daniel Wilson was a very pleasant surprise, but I felt The Weeknd got outdone on his own song, partly thanks to the robotic auto-tune he uses. I like how Kendrick really connected with this song more than his latest feature verses (“The Greatest” by Sia and “Don’t Wanna Know” by Maroon 5 are examples of bad Kendrick features), probably because the message of the song relates to Kendrick’s early Compton days.

And out of the blue, the Metro Boomin produced “Six Feet Under” (featuring Future) gives the listener suggestive lyrics and a “turn up” feeling, but the album goes back to a throwback pop sound with “Love to Lay”, which sounds like any generic Top 40’s song. I’ve always thought The Weeknd’s voice was basically a softer version of Michael Jackson’s. “A Lonely Night” really sounds like an 80’s boogie track MJ would make, and I think it’s an interesting concept, but unmemorable to me.

After this track, the album’s sound fluctuates. The album switches from the R&B/pop sounds of “Attention”, to “Ordinary Life”, a sort of hip-hop fusion where The Weeknd shows off his flow, back to pop with “Nothing Without You”, and to trap with the Future-featured “All I Know”. Future just seems out of place in this track, unlike his feature in “Six Feet Under”. “Starboy” then prepares to end with the soulful “Die For You” (one of the best songs in the album in my opinion), and concludes with “I Feel It Coming”.

“I Feel It Coming” is a groovy pop song, but just doesn’t seem like a conclusion to the jumbled sounds of “Starboy”. I could “Feel It Coming”, but the conclusion the album needed never came. Compared to other closing songs this year like “Saint Pablo” from Kanye West’s “The Life Of Pablo” or “Futura Free” from Frank Ocean’s “Blonde“, “I Feel It Coming” isn’t a memorable song that lets the listener understand the whole album, which is needed in a final song. The album as a whole would’ve progressed better if the first track, “Starboy”, switched places with “I Feel It Coming”.

“Starboy” was a great album, one of my most favorite listens of the year, but it feels more like an experiment than a complete album. The Weeknd is struggling to find out what sound he wants to go with, but individually the tracks are mostly good, especially some great features. Ultimately, “Starboy” simply fails to match the consistent, smooth sound of his last album, “Beauty Behind the Madness,” but is definitely worth listening to.