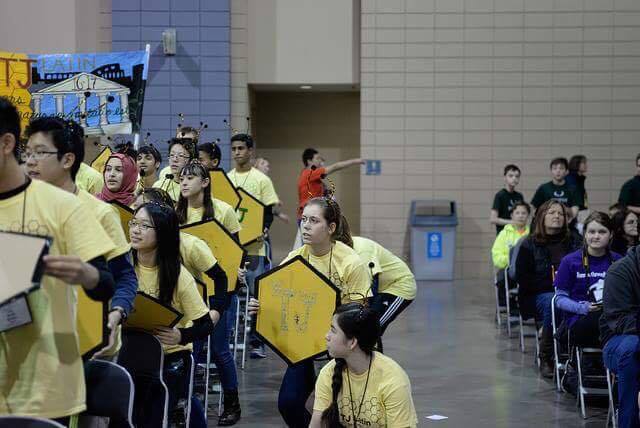 The theme for this year was “Omnis Ars Naturae Imitatio Est”, translated as “All art is but an imitation of nature.” To emphasize the theme, officers of Latin Club decided on a bee theme in reference to “The Aeneid,” a Latin epic by the poet Virgil, when creating spirit props and cheers to display at the convention. Students had the opportunity to create paintings, mosaics and sculptures, in addition to giving speeches in English and Latin.

Prior to convention, both club members and officers had to prepare. Officer senior Anshu Sharma, who won the Sue Robertson Spirit of the JCL Award at the event, reflected on his role.

“As a whole the biggest thing we needed to do to prepare was to make our spirit props for the spirit competition,” Sharma said. “The props we decided on were bee antennae and honeycombs that we would hold up in our themed spirit cheers.”

Jefferson, with nearly 100 attending students, won many large awards, including the scrapbook competition. However, with so many people in attendance, it was important to stay organized.

“As an officer, we had to deal with a lot of logistics like organizing people and making sure they were all where they needed to be at all times,” co-president Rebecca Mays said.

Not only was the convention an opportunity to display talent, but it was also a chance for attendees to embrace a shared passion for Latin with students from all over Va.

“I really enjoyed the community. There were so many amazing people who had such a love for the classics and meeting those people was amazing,” freshman Manu Bulusu said.

In addition, going to the convention was an opportunity for Jefferson’s Latin Club members to become closer to each other.

“At a personal level, I met kids at TJ that I hadn’t seen before and I had so many wonderful interactions among TJ students,” Sharma said. “I think we all learned a lot at convention about what it means to study Latin both as a student in the Virginia Junior Classical League and as a student in TJ Latin.”