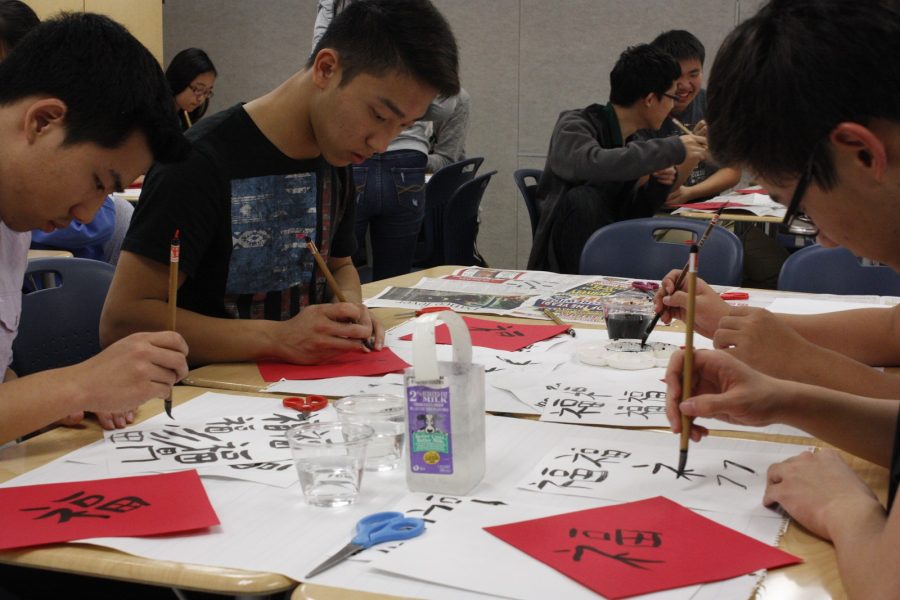 At a Chinese Honor Society (CHS) eighth period event, Chinese learners had an opportunity to learn more about their language and the cultural background behind it. On Friday, Nov. 18, the Chinese Honor Society put together a special event for students immerse themselves in Chinese culture. Teachers from the Confucius Institute at George Mason University led students in learning about traditional Chinese calligraphy and paper-cutting techniques.

“We often choose to do cultural events [at Chinese Honor Society] and [Ms. Xu] reached out to the individuals at GMU,” CHS president Dan Qi said. “The teachers from GMU brought all of the materials, so we just had to make it a special activity [on Ion]. [It was] just a fun cultural event that teaches CHS members about different types of Chinese arts.”

With calligraphy brushes, ink, and paper, students were able to create traditional signs wishing for good fortune. The fruits of their efforts are on display outside the Chinese language classrooms, with paper cutouts and brush-painted messages.

“[The] main goal [of the event] would be to get TJ students engaged in Chinese culture and see how beautiful [and] fun it can be,” CHS vice president Vivian Dong said. “There’s a lot of stuff that goes on besides just learning the language.”

The event, which ran both A and B block, was full in both blocks. Participants were not limited to Chinese learners- all interested students were able to be a part of the activities to learn more about Chinese culture.

“Some people who didn’t even know Chinese showed up and ended up trying the calligraphy [and] paper cutting activities and that was pretty cool,” Dong said. “We just hoped people would learn something cool and also connect to Chinese culture more.”