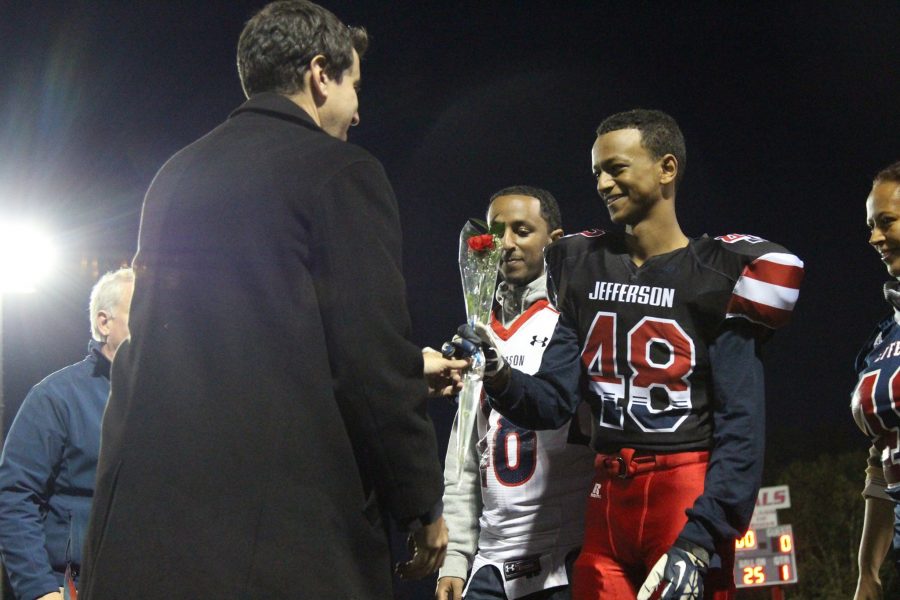 Senior football player Kirubel Aklilu and his family greet and receive a rose from principal Evan Glazer before the game. The 2016-2017 school year is also Dr. Glazer's last at Jefferson.

Running back Steven Rehard, bearing a U.S. flag, and the rest of the Jefferson football team’s seniors sprinted onto the field at Evans Memorial Stadium one last time on Nov. 4.  As this happened, the cheerleaders and Marching Colonials in the class of 2017 also took their positions on the track and in the bleachers for their final game.

Before the game, the seniors were honored in a pregame ceremony with their parents.  Each football player stated why they joined, and answers ranged from “because they wanted to keep playing the game they loved” to “because their base school friend said that nerds don’t play football.”

Senior football players were full of adrenaline before the game.

“Each one of us was committed to play the best game of our lives,” he said. “It was always in the back of my mind that everything I did was going to be for the last time, so my mindset was to make the most of it,” said senior quarterback Jack Boyle.

The Colonials jumped out to a 13-7 lead early in the first half after they capitalized on three fumbles, scoring two rushing touchdowns.  However, a missed extra point would lead Jefferson to surrender their lead to the Marshall Statesmen by halftime.

From there, Marshall took a commanding lead.  The Colonials were unable to score again and the Statesmen pulled away with five straight touchdowns, winning the game by a final score of 13-48.

However, even though the seniors capped off their final game with a loss, they still felt the emotions of leaving the field for the last time.  Senior Jashan Matharoo described the feeling as nostalgic.

“I looked around and saw the guys I played freshman football with, and we’d all grown so much.”

Both Boyle and Matharoo intend to play sports in college, although neither has a definite plan. Friday was the last time some team members will play in a football game, but for others, playing football for Jefferson was the start of a continued athletic career. However, all the seniors’ time playing for the Colonials is now in the past.

As Matharoo said, “You want to rewind to the start and do it all over again, even the hard parts.”