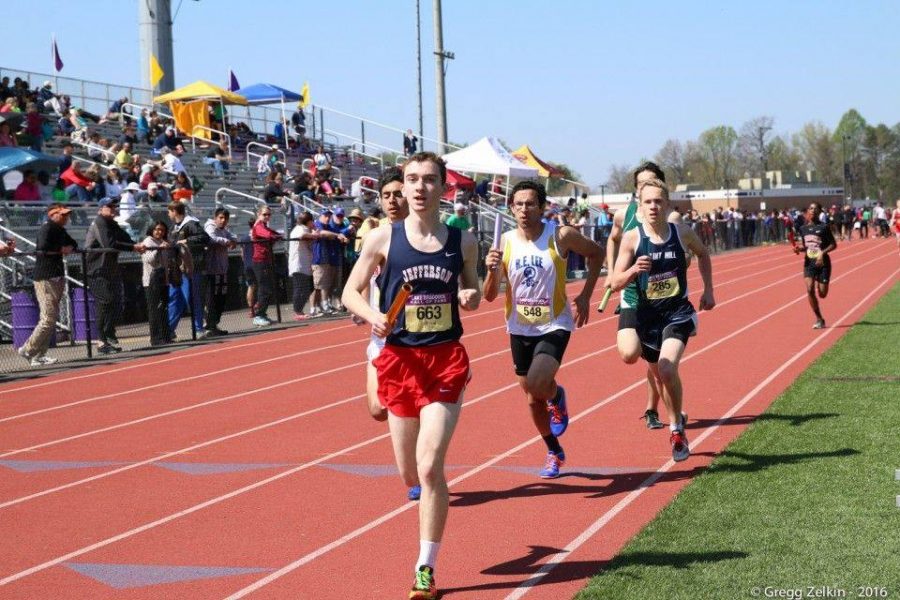 Junior Sean Clancy runs towards the finish line in a relay race.

Junior Sean Clancy has been running for the Thomas Jefferson Cross Country Team since his freshman year and has been training since the summer prior. After swimming, playing basketball and playing baseball throughout elementary and middle school, Clancy first tried competitive running at Jefferson.

Why did you decide to join the cross country team?
I just really like running and the feeling as you run and get in better shape. At the end of a race, the thrill of outkicking other people to win is fun.

Can you describe your practices?

Generally, we’ll start with thirty minutes of warm-up jogs and stretching. Then if [we’re doing] a long run [that day], then we’ll go out and [run] seven or eight miles. If [we’re doing] a workout like interval training then we’ll go out on the track and do 400 [meter runs] at a four minute mile pace and [switch to] an easy 400 [meter run] eight times.

Our runs and stretching are structured, but at the end of practice we usually do have time to do strength training or ab exercises on our own. I do a series of drills that help with technique because no one on our team’s technique is perfect so it’s just something that I like to work on because it allows me to run more efficiently.

How do you work together with your teammates to improve?

We’ll watch each other when we’re running and like if we see something that’s off, we’ll give each other tips. I feel like the team atmosphere [is my favorite part]. We’re all training together and working to get faster together.

What are your future plans for cross country?

What are some of your biggest accomplishments in cross country?

This year I made top seven when I was running in the post-season which was nice because [instead of] going to the meets [for the top seven] and cheering them on, [I was] actually able to run in the post-season. Also, this year we got second in regionals as a team.

*Division I colleges have higher budgets for athletics, bigger and more nuanced facilities, and more extensive athletic scholarships than a Division III school.