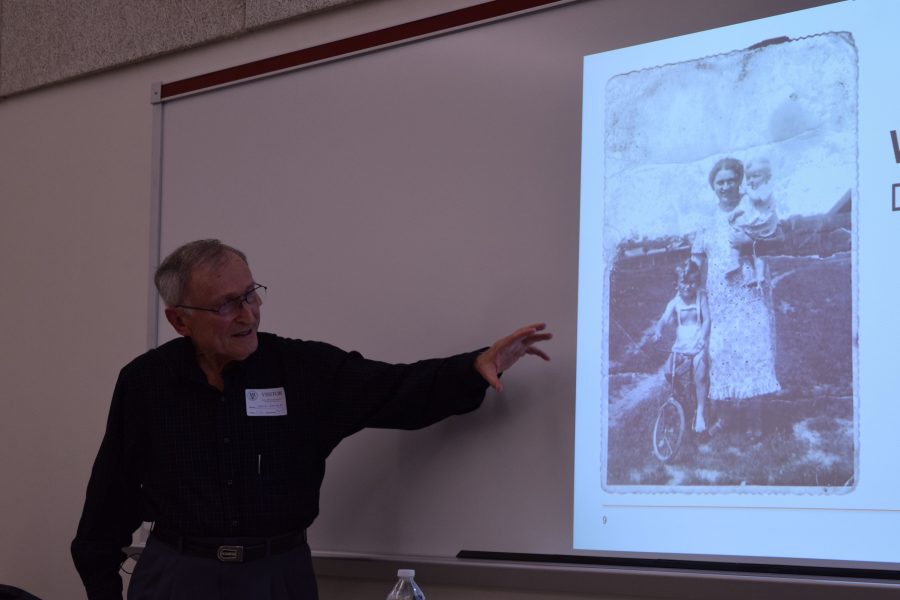 Holocaust Survivor Marcel Drimer shares a picture of his sister and mother.

In honor of their upcoming play, “The Diary of Anne Frank,” the Jefferson drama program arranged for a survivor of the Holocaust to come in and share his experiences.

The speaker, Marcel Drimer, survived the Nazi regime in Poland, where his family was forced into a ghetto and lived for some time. Eventually, they were able to escape to some samaritans in a nearby town, where they hid until the liberation of Poland.

“He talked about his father telling him to wait in the bush, and then he talked about running out, and you could see that even after 70 years, he still began to cry at the thought of what happened then,” senior Arjun Guidroz said. “You could see the fear that he felt then, and how guilty and scared he must have felt after realizing he had endangered his family.”

Drimer had a very tough and emotional story to tell, but according to senior Aaryan Balu, hearing stories from Holocaust survivors is crucial to our understanding of this event.

“Something sort of clicked,” said Balu. “Everybody has some sort of empathy or sympathy for someone who went through that, but every time you hear some of these stories, you get that moment where you’re like, ‘holy crap that happened.’ This is an event that happened to somebody real who is now talking to me.”

Hearing survivors of the Holocaust speak allows us to connect the Holocaust to our lives today, which Guidroz believes means significant things for social progress.

“It’s important to understand that in what we consider to be the modern era, something so barbaric and so wrong could’ve happened,” Guidroz said. “It’s not enough to learn about it, and say that everyone is equal now. To hear that something like this could’ve happened so recently proves that equality and human rights is still a relevant issue.”

Bay believes that this event can have relevance on a more local event, as well. He feel Drimer’s story has an important message for the TJ community.

“There was this moment where a student stood up and said, ‘My father survived a concentration camp,’” Balu recounts. “I remember Mr. Drimer turned to him and said, ‘Oh, which one?’ The student responded with ‘Dachau’ and Mr. Drimer said, ‘Ooh, Dachau, that was a really tough one.’ The way he talked about that, despite how incredibly serious it was, reminded me of the way TJ kids talk about our teachers. The way he has gone through that amount of stuff and is able to talk about it so casually definitely puts our problems into perspective, I feel.”