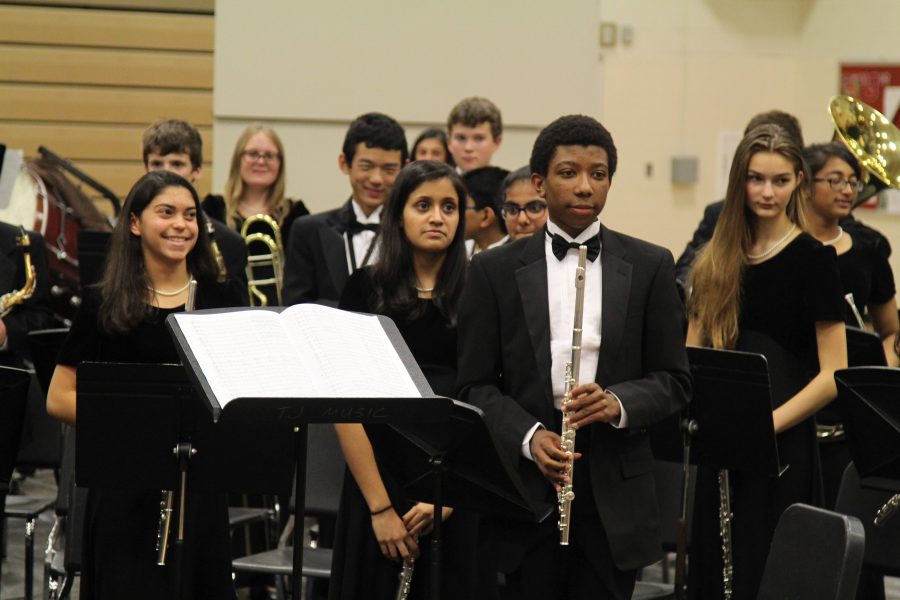 Turner Bumbary (right) proudly takes his bow with the rest of the Symphonic Band after a successful performance.

With the last strains of music coming to an end, silence filled the room for a split second before thunderous applause broke out in the school gym. Students of the Wind Ensemble, the last group to play after the Jazz and Symphonic bands, stood to take their bow as their band director, Adam Foreman, beamed beside them. After the concert, held on Wed., Nov. 2, Foreman and students participating in the event were very pleased with the results of their work.

“I don’t have a lot of concerts where I really wouldn’t change much, so this is probably one of only maybe three concerts I’ve ever done where I’m really satisfied with where we were, for that time of the year,” Foreman said.

Each band played three songs, with every one of them being stylistically different from the others. In order to select music out of the 80 to 100 pieces Foreman considers for concerts and competitions, he makes an effort to have songs varying in tempo and era.

One of the songs played by the Wind Ensemble, “Sheltering Sky,” was dedicated to Ryan Feng, a percussionist from Jefferson’s Class of 2013 who took his own life in June.

“I wanted something that was a gorgeous piece of music, and it was also more for his family, just because I think that the mood of that piece more depicts the feelings that are associated with coping with his loss,” Foreman said. “That piece is very—[as] I call, ‘hauntingly beautiful,’ so there’s a certain sense of unrest in it, all the time, and I know that more goes along with the emotions associated with what happened.”

In addition to being the first band performance of the year, this concert will possibly be the last one held in the gym. The auditorium is set to open before their winter performance in December.

“I thought the younger students performed really well, considering the gym is not a great environment to play in,” said Foreman. “It’s very different than what we are used to hearing.”

According to freshman flute player Turner Bumbary, students also aspired to amaze the crowd with their accomplishments after a short time of playing together.

“My goal for this concert is that we just show our parents our baseline for the beginning of the year, and that we also impress the people with how far we have been able to come in just two months and how our group is technical enough that we can all basically mesh and create a good sound.”

Bumbary also hopes for the band to improve as a whole so that they can hold even better concerts throughout the year.

“Parts of our group just started playing together, though we have a marching band, who has played together for a long time, our group has only really been practicing as one band for two months, and as we practice and progress technically, and as we play together, we should be able to play more difficult songs and also play them with better quality,” Bumbary said.

With this success, the ensembles plan to continue working hard and playing to the best of their abilities.

“In terms of goals, it’s just keep making music: we’ll play harder pieces, we’ll keep pushing ourselves,” said Foreman. “As far as the groups go, just to play a lot of variety and do everything at as high level as possible.”