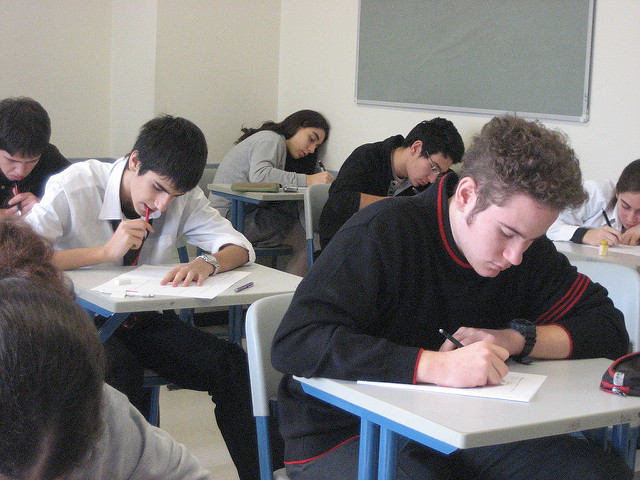 This year was the first year at Jefferson that participants in the PISA used a computer, instead of manually writing their answers.

The triennial Programme for International Student Assessment (PISA) was taken by 85 randomly selected freshmen, sophomores, and juniors last Wednesday. However, due to technical difficulties, less than half of the fifteen year olds completed the test. The PISA tests students on real world application skills based on reading, mathematics, and science. Administered by the Organisation for Economic Co-operation and Development (OECD), the goal of the PISA is to collect, compare and study data from around the world. Since its founding in 2000, over 80 economies have participated in the test. Every three years, high schools across Fairfax County also participate in the test.

“In comparison to other US high schools, [TJ] had the highest scores in the nation,” administrator and assessment specialist Adam Wong said.

However, it’s harder to gauge how the school is doing on an international level.

“There is a raw score, but the standards are different in the US. Other foreign countries might have their own national standards,” Wong said.

This is the first year at Jefferson where all components of the test were administered through the online testing platform TAO. Due to this change, 52 students were unable to take the three hour long test.

“The testing software had a lot of problems, so it took a while to actually do the test. Towards the end of the test, most people weren’t done, so people were rushing through and just putting down random answers,” sophomore Harshita Pasham said.

Currently, the administration is working to fix the problem.

“We’re communicating with the central office and with the development team who developed the web based assessment,” Wong said. “There are three potential outcomes. The students who were not able to complete [the PISA] would either be asked to retake it, possibly next week, or they’ll be excused– they won’t have to take it. The third option is that we may be required to randomly ask another group of students to take it.”

For some, the last week of first quarter was hectic and filled with tests and projects, which led to them to opt out of taking the test. Of the 28 students that were able to finish the PISA, a few regretted their decision.

“It was a waste of time, and I could have been doing more important things,” said Pasham. “I would have definitely opted out.”

“[The administration] chose people randomly to take it, and if some of us decided not to, I feel like it would skew the results a bit,” sophomore Fadumosahra (Sahra) Yusuf said.

PISA test questions are designed to examine how testees apply their knowledge to real world applications. This year, the test focused on scientific literacy, although participants each received different portions from different topics.

Wong believes that test doesn’t accurately measure the abilities of TJ community. “Speaking with the students in previous years, the level of questions they ask, in comparison to the SATs they take, or even the SOLs… the rigor is much easier,” Wong said.

Despite its shortcomings, the test still allows the OECD to draw valuable conclusions about countries as a whole. The 2012 PISA results showed that the US has underperformed in math (ranking 27th out of 34th) despite the fact that it pours in over two times the money as similar performing nations. Jefferson, on the other hand, performs better than almost 90% of schools in Shanghai, China.

“TJ does pretty well, and since we’re participating, we might boost the scores a little [in the US],” Yusuf said. “I’m glad I got to represent my school and my country.”

Although there is no personal benefit for participants, who are unable to view their scores, the Fairfax County Public Schools (FCPS) superintendent, Karen Garza, wants every school in Fairfax to participate in the test. FCPS then uses these scores to evaluate the county’s performance as a whole.

“I just want to thank the parents and students,” Wong concluded. “We have a great community. They understand that even though there might be no personal value for their child to take it, but for the benefit of the school the results hopefully can be used a meaningful way to compare how we did versus any other school.”