As Halloween Ends, Students Petition for No School on November 1 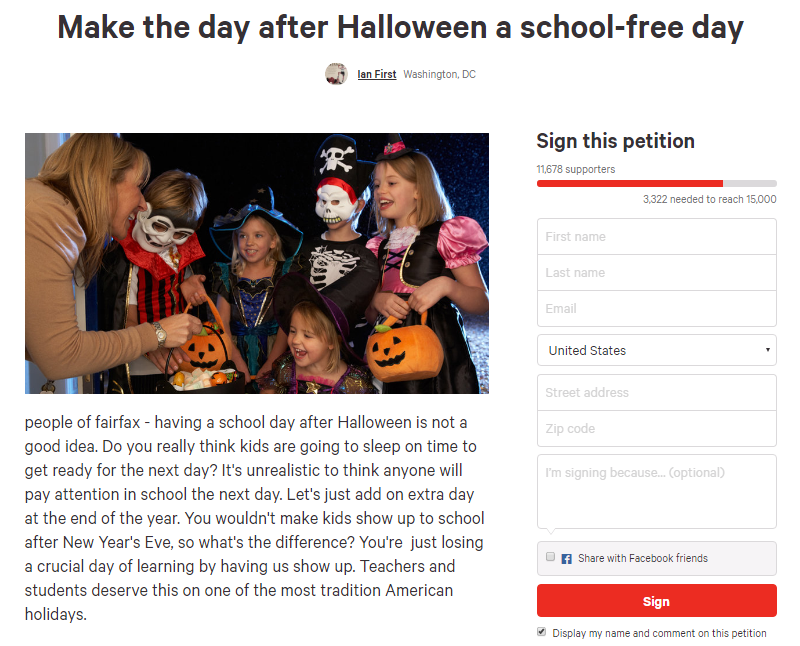 This is the petition that was used to circulate the idea of cancelling school tomorrow. The petition starter, Ian First, plans to send this to School Board Employees such as Ryan McElveen, Jeanette Hough, and Ilryong Moon. The petition can be found at: https://www.change.org/p/fairfax-county-public-schools-make-the-day-after-halloween-a-school-free-day

In my opinion, FCPS should not have school on November 1 because by doing so, students will be able to maximize the amount of fun that they can have on this special holiday.

Some FCPS students who feel that they need to have Nov. 1 off because students walk around their neighborhood trick-or-treating, going to parties, and eating a lot of candy on Halloween signed a petition asking the FCPS school board to cancel school on the weekday after Halloween.

However, the time spent enjoying Halloween traditions comes in conflict with the time spent doing homework for the school day that follows Halloween. Some people feel that there should be school on Nov. 1 because unlike such days as Columbus Day and Christmas, there is no officially recognized holiday in the US on that day. This makes sense considering that it feels really awkward to have a day off in the middle of the week rather than days off at the start or end of a school week. Having school on the weekday after Halloween would also allow for a longer summer, as there would be one less day in summer if Nov. 1 was an off day.

While there is no legal reason to have a day off tomorrow, perhaps we don’t need one. We could have Nov. 1 off as if it were a snow day, but coincidentally on the same day every year. To this extent, although having a longer summer may be in the interest of some people at FCPS, having a summer that is only around 59 days long is not a major issue, as 59 days is still a long period of time. However, having a day off after Halloween will mean a fairly well spaced out break relative to Thanksgiving and Christmas, so it seems like a reasonable date to have a day off. Not only that, but students will also feel happier on Halloween. While a day off looks and feels shoehorned due to its placement in the middle of a school week, there were Telelearn days in the middle of the week at Jefferson. It is important to note that it may be a bit too late for Nov. 1 of this year to be a day off, but this off day could be implemented in future years.

The combination of homework and Halloween festivities will make it impossible for students to get a good night’s sleep on Halloween night. If Nov. 1 becomes a day off, then students will have plenty of time to sleep, do their homework the next day and also participate in Halloween activities. A day off would even allow students to recuperate from the stresses that tend to occur at the end of the quarter, and to spend time with family to boost mental health. By making Nov. 1 a day off, we can make students feel happier and also make them healthier.

After all, as the petition says, “You wouldn’t make kids show up to school after New Year’s Eve, so what’s the difference?”