How modern students view Presidential elections through the media 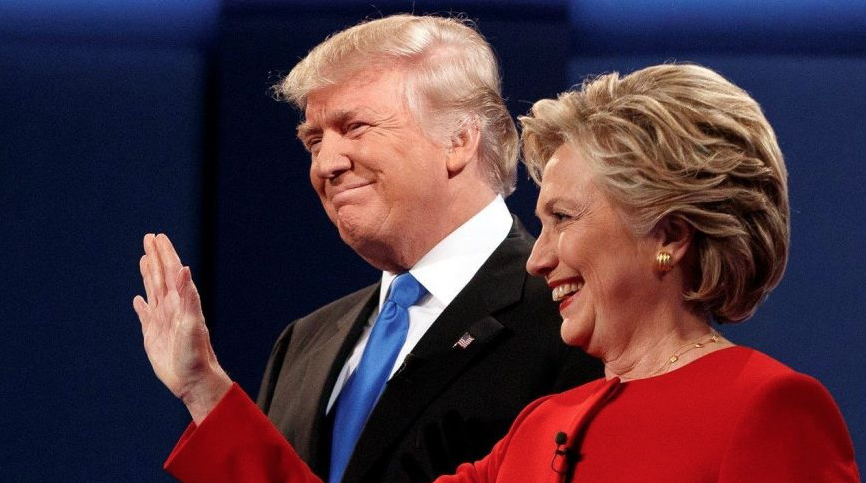 Hillary Clinton and Donald Trump stand together before beginning the first televised Presidential Debate of the 2016 campaign.

From pictographic editorials on early American presidential elections to the first televised presidential debate between Kennedy and Nixon to candidates live-tweeting their campaigns, media has shaped elections and the public agenda since democracy reached the United States. Over time, the structure of the American electoral system has changed: the ways in which we vote have changed and the media has expanded and completely overturned the ways in which the public learns about Presidential candidates.

How does the media today shape the opinions of Jefferson students, some of whom will vote for the first time this year?

Senior Ankush Joshi said that he feels social media is the most effective way for the public to learn about presidential elections. He uses it more often than any other form of political media. According to him, the open forum of social media can provide opportunities for exaggerations and misinformation, but that same open forum allows voters to stay engaged and updated constantly.

“I think [social media] is effective because of the nature of the election, with the developing story lines of the various candidates and their campaigns and personal histories. However, it is important to check the credibility of social media, but through forums like Facebook and Twitter, you can get thorough information almost instantaneously,” Joshi said. “I think it affects the democratic process by compelling younger voters to go to the polls and get more information.”

“The information can often be biased towards an organization’s views. Social media does not give the best coverage of political news and can cause ignorant people to believe things that are not true,” Nguonly said. “Also, [television news] is effective because a lot of people watch TV. I used television news to watch the political debates of the primaries and now the general election.”

Junior Anonto Zaman looks to newspapers to avoid bias in the news. According to him, newspapers have higher-quality writing and are less biased than television sources.

“Compared to outlets such as Fox News, MSNBC, the Huffington Post, and Breibart, sources like The Washington Post and The New York Times seem to be far less biased in their coverage of the election,” Zaman said. “That being said, I still try to be selective about the newspapers I pick to try and avoid bias.”

Senior Cece Chu, on the other hand, listens to public radio during car rides to ensure that she can fit accurate, objective information about elections and other political events into her busy schedule.

“NPR steers clear of a lot of the trash talk and rumors you find on the internet,” Chu said. “Everything they say is fact checked and up to date, but apart from the professionalism, they also include lots of interviews with regular voters so that listeners can get a broad perspective.

Once, word of mouth and printed pamphlets moved down the east coast to educate new American citizens about elections like that of John Adams versus Thomas Jefferson in 1800. Now the youngest of us can voice our opinions to global audiences in less than 30 seconds through mediums like Twitter and Facebook, while parents watch CNN or Fox News in the living room.