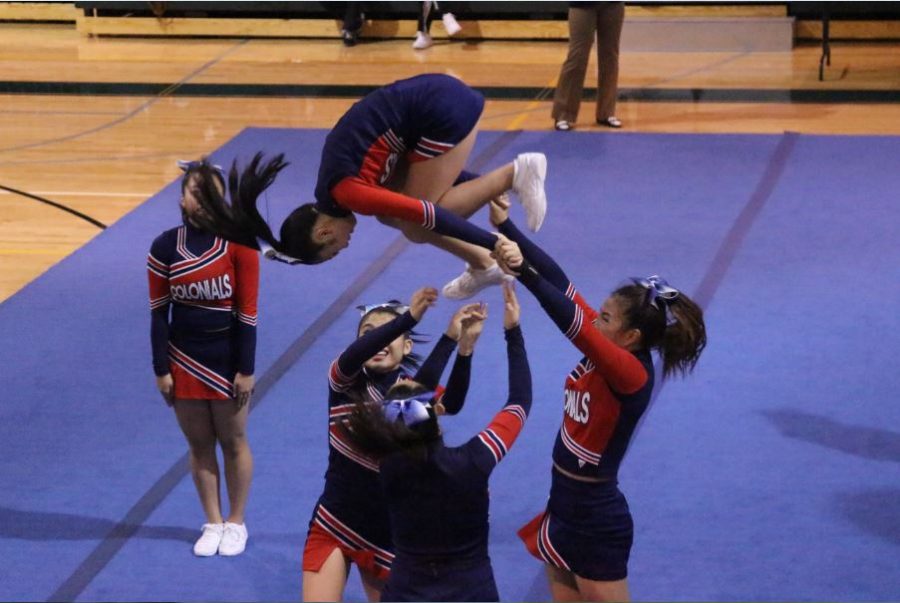 Rachel Lee backspots a flip at the cheerleading semifinals at Wakefield HS.

Starting a new sport as a senior has its fair share of challenges and adjustments, both of which senior Rachel Lee had to accommodate when she transitioned from three years of marching band to a season of varsity cheerleading. Other than practicing taekwondo in elementary and middle school, Lee signed up for cheer with no prior experience, managing to challenge a social norm and enjoy her last season at TJ, despite pressures and expectations.

Why did you decide to try out for cheer?
In the summer, my friend Sharon and I were just working out for fun, and then I was like, “Hey, what do you want to do this week?” And she was like, “I’m actually going to cheer tryouts.” It turns out that the first week was just conditioning and getting to know what cheer was like, so I went, not expecting to stay for the second week, which was the actual tryout week.The first day I learned how to backspot, I didn’t really like it because I felt like I was really bad at it. But Sharon kept encouraging me, and the following days I started to feel more confident. I don’t really remember the specific reason why I finally decided to try out, but I do remember that it was a really hard decision to make. There was a lot of fear of the unknown, like how would my friends react, how would my parents react, what would colleges think, what would my band director think, was I even good enough, etc. etc.

What are some of the most memorable aspects of the season?
I will never forget how it felt to run out of the gym after our Finals performance knowing that I had left everything on the mat. The sweatiness, the exhaustion, the pure happiness and pride all mixed together and I just started crying. But they were happy tears! I’ve never cried happy tears before. It was really weird and kind of funny. We were all screaming with our wrecked voices and hugging and jumping around. I could have cared less about what place we got, because for us, that was the best run our team had ever had.

What is your favorite part about cheerleading?
I’ve never been part of an activity where each member was such an integral part of the success of the group. In marching band, if you mess up, the music might sound weird or the formation will be wrong, but in cheer if you mess up, someone could get a concussion or seriously injure their back. You have to be focused, because your teammates are counting on it. The flyer has to trust that the bases and backspot will catch her, the bases and backspot have to trust that the flyer will stay tight. That trust is my favorite part about cheerleading. It’s even more special when you know that you’ve earned that trust by consistently doing your job, and you can tell that no one in the group is afraid anymore.

How does cheer compare to marching band?
Cheer only has two competitions, three at most depending on the results. Marching band has a competition basically every weekend and sometimes it takes hours to even get to the competition location. I remember coming home and it would be 1 am, and my parents would be really tired from staying awake to pick me up. Also marching band has a lot more equipment; there’s an entire truck we have to load with sets and flags and large instruments, and then once we get to the place all of it has to be unloaded and assembled too.

I hope I’m not making it sound like cheer is a lot better than marching band though, because they’re both good in their own ways. They’re two different activities, and depending on the type of person you are, you can fall in love with either one. Being in the marching band for 3 years was great, and I learned so much about discipline and perseverance. Without that experience, my year on cheer would not have been as successful. But cheer was the activity I was lucky enough to find after those three years, that I truly fell in love with.

Why did you decide not to do marching band?
I think it was too much time commitment and money for something that I didn’t completely enjoy. Especially since there are four kids in our family, my parents have a lot of stuff to pay for already, and I didn’t want to ask them to pay for something if it wasn’t really meaningful for me.

What are some of the challenges that you encountered throughout this season?
There were a lot of times when I didn’t feel like I was good enough. As a senior, I couldn’t be on JV, so it was either varsity or cut. I made it on, which felt good, but I also felt unqualified to be on the varsity team. At times it caused me to doubt myself, but at other times it pushed me to try harder. Especially since I only have one year, I better make every single day count, you know?

Why do you think participating in a new sport your senior year is a unique experience?
Participating in a new sport senior year is unique because even though you’re joining as a new member of the team, people still look up to you. Even if you don’t know as much as some of the other members and you can’t necessarily teach them cheer things, you can encourage them not to give up when an activity is difficult or lead by example in the way you act during practices.

What lasting impacts and lessons have you gained from cheer?
I learned not to be afraid to try new things. There’s little in this world that is impossible to do if you work hard a practice a ton. Also, it’s okay to quit. Don’t quit everything at the slightest hint of hardship or failure, but know when to let go. At the end of the day, the only person who has to live with the decisions you make is yourself. Finally, encourage one another. There’s no such thing as too much cheering. From belting encouragements to the football team every play to high-fiving your flier when she does a beautiful basket, never stop lifting each other up.