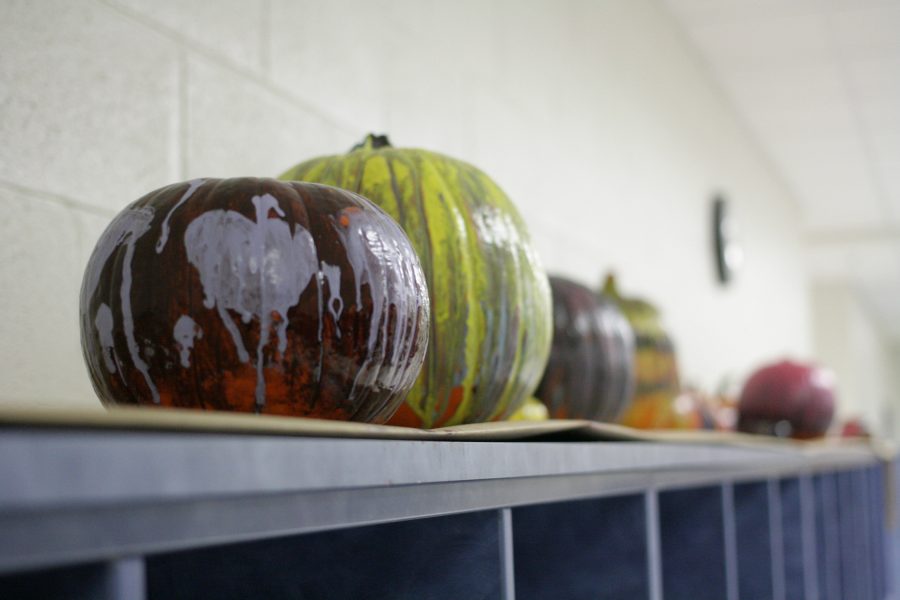 Pumpkin donations. Costume runs. Painting blood. These are just some of the ways the students and clubs at Jefferson are celebrating Halloween this year.

As sophomore Beza Girma said, “[Halloween] is a great excuse to look crazy while actually being sane.”

Students found unique ways to express themselves and celebrate the holiday, one of which involved applying face paint.

“I had blood coming out of my eyes, my mouth, my ears, and my nose,” Girma said about her Halloween-themed face paint. “One time I had [blood] coming from my eye; many people were like, ‘Are you okay? Do you need to go see a doctor?’”

Although these reactions from people who thought her face paint was real amused her, she says she appreciated the genuine concern.

Students at Jefferson showed their care, concern, and Halloween spirit in a different way too: by organizing and participating in Halloween-themed club activities.

Rotary Interact, a service club, hosted an eighth period dedicated to painting pumpkins. The pumpkins, bought with donations from Jefferson students, will be given to a children’s hospital in Washington, D.C. and placed in the rooms of children suffering from cancer.

Officers of Rotary hailed this now two-year tradition as one of Rotary’s first major successes, suggesting that what attracted people to the activity was a combination of having a good time and helping people.

“I think it’s a combination of having fun and painting pumpkins [knowing] that this is going to a good cause,” senior Christopher Niu said.

But Rotary Interact hasn’t continued this tradition because it elevates their club. Rather, members say it is the feedback from the hospital that has inspired the club to keeping painting pumpkins.

“The children’s hospital said it boosted morale last year, so that’s why we continue to do this year after year,” Rotary’s treasurer Rohan Arora said.

Latin students here at Jefferson banded together to host their own pumpkin painting event, called Mythological Pumpkins, which involved decorating a pumpkin using mythological elements. Aside from encouraging Halloween spirit, the goal of the event was to help new Latin students feel they are part of the Latin community.

“We are continuing this tradition because it is very helpful for Latin students that are new this year to get together, see the officers, and be friendly with the upperclassmen,” junior Hannah Kim said.

TJ Drama also joined in on the Halloween spirit by hosting a 5K run. Participants were expected to come in costume and could either run the 5K or engage in other activities such as face painting and applying makeup. Proceeds from the event will go towards fundraising for the drama department. Drama students attribute the inspiration for the 5K to wanting to capitalize on the spirit the department had last year for their Halloween-themed haunted house.

“We wanted to take all of that spirit and put it into something we can do this year,” junior Kanvi Shah said.

There exists a clear diversity in Halloween traditions at Jefferson, from painting pumpkins to wearing face paint, but one thing is clear. For many students, Halloween is the perfect time to let their inner creativity shine.