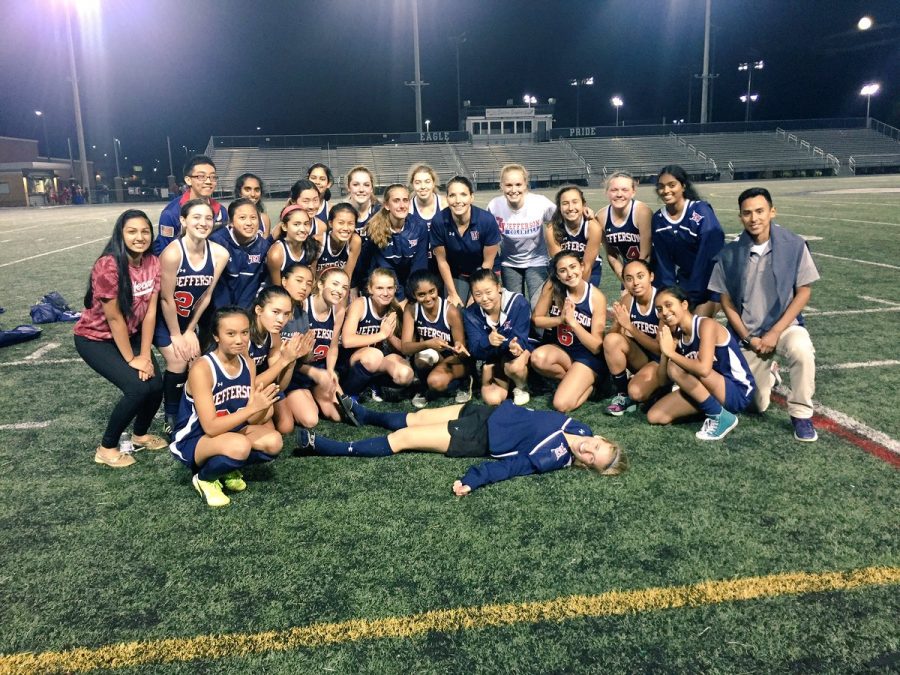 Jefferson’s varsity field hockey team came up short in the first round of the Capitol Conference playoffs against Edison High School on Oct. 17 by a score of 0-3, ending their 2016 campaign.

The Eagles and the Colonials both played intensely early on in the game, substituting players frequently and aggressively defending each other.  However, Edison won the first half, scoring two goals in just over six minutes.

Jefferson was displeased with a number of calls made by the referees.  The most controversial of said calls was a green card-turned-yellow card after senior Sunny Truslow, the Colonials’ only goalie, was accused of pushing an Edison player and then “talked back” to the referees when given the green card, which she claims that she never did.

However, the Colonials couldn’t be counted out of the game with an entire half of the game left to play.  After the end of a rough first half, seniors Stephanie Zablocki, Sofia Kruszka, and Dana Scheetz reinvigorated the team with a pep talk, and the Colonials bounced back with the same fighting spirit that was seen earlier in the game.

Though the team’s attitude shifted, Jefferson encountered even more trouble with the two officials during the second half, shown repeatedly by the displeasure of head coach Aubrey Lear.  On several occasions, the Jefferson coaching staff called out the referees for missing foul calls, including multiple instances of the ball hitting an Edison player on the lower leg, which is illegal in field hockey.

“One hundred percent, the first thing that comes to mind is that I’m frustrated at the way it went because I felt like we were not allowed to play our game because of how it was called,” Lear said.

Not all was dark for the field hockey players, though. After the game, Lear also declared that, more importantly, she felt pride in how the team played and represented its school.  If the coach could describe the 2016 season in one word, she said without hesitation that the word would be “heart”.

“We didn’t see a lot of ‘traditional’ success,” Lear said. “We had a lot of battles where we went into overtime or we got a lot of great corners but we weren’t able to finish, but we had heart and teamwork all throughout and that’s what I’m the most proud of.”