Science Bowl hosts panel on succeeding in the science Olympiads 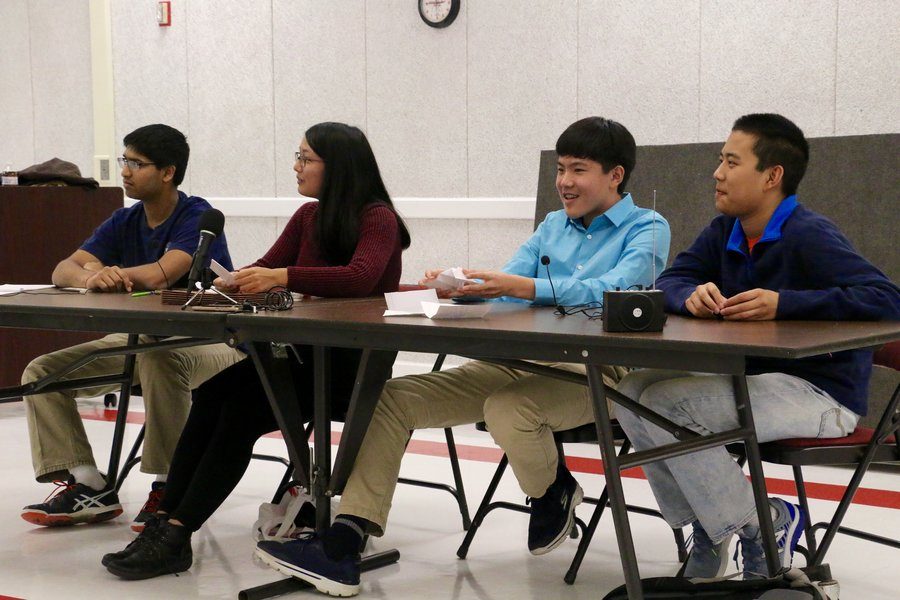 From left to right, Prasad, Tian, Charles Wang, and Franklyn Wang answer a question regarding the skills, outside of science knowledge, gained from competing in Olympiads. Franklyn Wang cited determination, while Tian elaborated on the "easy, trusting relationships" she has developed.

About a dozen rows of seats spanning the Annandale High School lecture hall were filled by parents, students, and educators who convened for a town-hall meeting titled “Succeeding in High School Olympiad Competitions” hosted by the Jefferson Science Bowl team and Hope Chinese School-Fairfax. On Oct. 23, four Jefferson students — senior Neeraj Prasad, senior Joyce Tian, junior Charles Wang, and junior Franklyn Wang — were seated at a panel in the front of the room to describe their Olympiad experiences and answer questions posed by the audience.

Prasad specializes in biology, and was a 2015 USA Biology Olympiad (USABO) National Finalist, USABO Camper, as well as 2016 Research Science Institute (RSI) participant. Tian was a 2016 International Chemistry Olympiad Silver medalist and a member of the U.S. National Chemistry Olympiad (USNCO) Team. On the other hand, Charles Wang was a 2015 and 2016 USA Physics Olympiad (USAPhO) Gold Medalist in addition to a USAPhO camper. Franklyn Wang was a MOSP Camper and has earned a 2016 USAMO Honorable Mention.

“It was definitely exciting to see the positive reaction to our experience [in Olympiads],” Tian said. “I wasn’t expecting the size of audience to be as large as it was; I’m glad that STEM [Science, Technology, Engineering, and Math] is important to so many people.”

The event, an act of community service, was moderated by Yuyan Zhou, active member of the Hope Chinese School community. During the first hour of the meeting, the four students discussed their backgrounds in the various fields of Olympiad science and also provided broad descriptions for each specific competition.

“I was disappointed that very few questions were asked about intrinsic motivation [for the Olympiads], as parents were generally more concerned about opportunity cost than real interest,” Franklyn Wang said.

Audience members were encouraged to direct questions toward the panel during the rest of the meeting. Franklyn Wang was surprised that a majority of the inquiries were on work-life balance at Jefferson, such as hours spent on homework, extracurriculars, and sleep. Zhou prompted the four students with questions, too.

“Our host Mrs. Zhou asked a really good question about the ultimate benefits from the competitions in science olympiads, other than the knowledge learned,” Franklyn Wang said. “I responded by saying that math contests have built my character far more than any other experience I’ve had. Nowhere else have I learned how to deal with very significant setbacks and yet still recover. Even after the math is over, I know that this resilience will continue to benefit me through life.”

Tian specifically recalls a parent asking about how they could push their child away from computer gaming to focus more on academics. Although she was unable to provide a direct response, the question inspired her to contemplate.

“I didn’t have a specific answer [to the parent’s question], and pondering it now, I still honestly don’t,” Tian said. “But I remember thinking about a hypothetical universe where my personal interest was predominantly gaming rather than chemistry. I’m not sure when my own parents would step in. I guess I’m lucky that I only have to wonder about that sort of situation.”

After the event, Tian noted that she and her co-panelists had similar study habits and a shared enthusiasm for learning, though they never discussed these topics together in the past.

“I was intrigued by my teammates’ responses to their questions. We’d never formally discussed our view on intrinsic motivation and self-education, and it was refreshing to see that we were all mostly on the same page regarding these topics,” Tian said. “Specifically, we all agreed that ‘strict study regimes’ weren’t particularly helpful, and could in fact hinder someone from pursuing their real interests.”

Two special guests, Longfellow math teacher Vern Williams and Longfellow MathCounts coach Mary Jo Clark, were invited to speak at the end of the meeting. Prasad and Franklyn Wang have been taught by these individuals, and cite them as positive and encouraging influences.

“I did not invite [Williams and Clark] and was very pleasantly surprised that they came,” Franklyn Wang said. “They opened a door for me to begin math contests and guided me through difficulties. Their final remarks, that school is not the only engine for learning and that passion is key to all success, touched me again as they had in middle school.”

Franklyn Wang, one of the main organizers of the meeting, found the experience fulfilling and hopes to organize a similar event in the future.

“[These events] are absolutely exhilarating, and being with my [Science Bowl] team [many of whom attended the event] for an entire morning and early afternoon is a wonderful experience,” Franklyn Wang said. “I felt so happy after seeing how many people came. I felt like I really made a difference.”